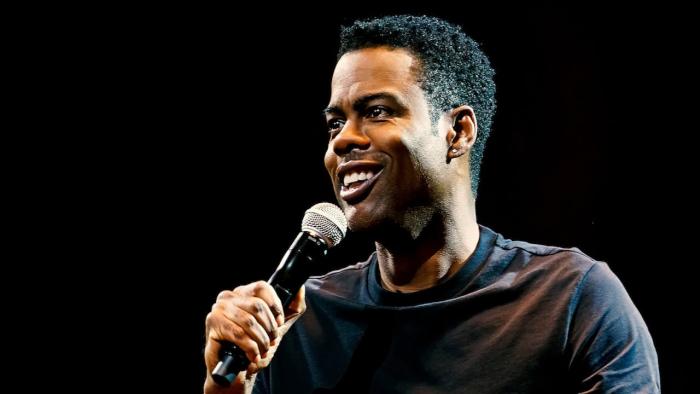 Chris Rock Promises His 'Saw' Remake Will Be Injected With Comedy

One of my favorite Chris Rock routines involves him reminiscing about his parents’ cure-all: Robitussin. Broken leg? “Let that ‘Tussin get in there! Let that ‘Tussin go down to the bone! If you run out of it, put some water in the jar, shake it up, more ‘Tussin! MORE ‘TUSSIN!”

I couldn’t help but think of it immediately after being reminded that Rock stars in a reboot/spin-off/sequel to the Saw movies due to hit theaters May 15 of this year.

Sure, Jigsaw sets traps but he also offers up a hefty dose of ‘Tussin to heal your severed hands, the poison coursing through your body, or the shotgun blast to your face. At least, in my dreams, that’s the storyline Rock handed over to Jigsaw writers Pete Goldfinger and Josh Stolberg so they could pen the script.

“A lot of times I go to a movie or I watch a TV show and I go, ‘Wow, you know, two jokes would have made a big difference in that. I love Saw, but I was like ‘wow, it has almost no humor at all.’ So, it seemed like a good place… good fertile ground… by the way, the new Saw, I’ve seen like a rough cut. It’s still Saw… it’s bloody, it’s gory, but there’s like a sprinkling of humor here and there. We’re not revamping it, it’s not Scary Movie, it’s Saw.” - Rock to IGN

Allegedly titled The Organ Donor, the movie also boasts the director of Saw II - Saw IV, Darren Lynn Bousman, and Samuel L. Jackson starring as Rock’s father. Although filming began in July 2019, there really isn’t much more information about the franchise’s newest entry, but I already have a theory brewing in my head based on the information that has been provided to fans and media outlets.

Rock’s own father is the serial killer. I’m calling it now. Or maybe not. After all, Lionsgate’s chairman Joe Drake praised Rock’s originality in a statement to The Hollywood Reporter back in 2019, so he’d better come up with something better than my lame shot in the dark.

“This upcoming film will still be as mind-bending and intense as all the previous Saw films. Chris conceived this idea and it will be completely reverential to the legacy of the material while reinvigorating the brand with his wit, creative vision and passion for this classic horror franchise.”

So maybe there is ‘Tussin involved? The killer is a crazed surgeon stealing organs (a callback to the alleged name) and forcing the patients, hooked up to a ‘Tussin IV, to run a gamut of traps. Yes, it’s all coming together for me. I await the May premiere and will be sure to see which of my excellent theories turn out to be true.


← 'Mulan' Director Explains Why the Live-Action Won't Include the Songs and It Makes Sense | Experts Say PewDiePie is 'Burnt out.' Fail to Mention History of Spewing Hate →