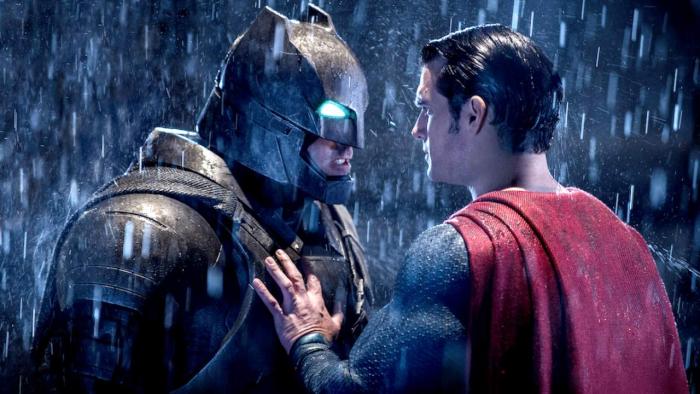 Finally, after nearly four years of obstinate refusal, I sat down to watch Batman vs Superman: Dawn of Justice. Although I went into it with a semi-open mind and a reminder from my friend Jesse to “not take all of it literally,” I was not ultimately pleased by the experience.

As movies like this usually do, Bats vs Supes left me with so many questions that require answers.

— Why did those bats levitate Lil’ Bruce Wayne out of that shaft he fell into? I don’t remember science of bats, but can they just tornado push someone out of a hole? How can I find some bats to try this out?

— Why did Snyder make Doomsday’s butt so damned tight? He’s some unholy abomination without a dick, but he’s been doing the Kardashian Booty Kamp while he waits on Superman to show up. It was hilarious. Why? WHY?

— Lex Luthor isn’t supposed to be an unholy combination of the Joker, the Riddler, and Zuckerberg, right? He never felt like Luthor to me, at all. You can shave his head, you can age him up, but if the writing of the character remains the same, so will my undying fire of fury toward him and Jesse Eisenberg.

— Why did I have to sit through so much bullcrap about arming rebels and Superman is a butthole… wait, no. We like him aga… wait, no. He’s helping to carry out the injured and dead but MAYBE he helped kill them, based on NOTHING. UGH.

— Does everyone else enjoy watching Batman kick Superman’s ass as much as I do? I love it.

— What did they put in the coffin they gave to the US for burial? I like to think they took Doomsday’s finally revealed genitals and just plopped that sucker into the coffin for giggles.

— Why did DC/Warner Bros/Zack Snyder think they could take some of the most anticipated moments in DC fans’ cinematic lives and just squish them into one movie? There was no build-up to the Superman and Batman fight earned through previous interactions of the two. I wanted to see the story behind the Robin costume in the Batcave, even though I know it. I want to know why Wayne Manor is in disrepair. I want to see the journey that brought Batman to this place.

— DO you think —and I’m just spitballing here— that Snyder was subtly implying that Superman is a God figure? I mean, I think it might be there in the TONS AND TONS OF NUANCE AND SUBTEXT if you look for it. /s/

— Is the warehouse fight the best representation of Batman’s fighting style ever set to film and why is the answer yes? DISCUSS.

— If this is what a Snyder Director’s Cut looks like, why do some of y’all want this to happen to Justice League, a perfectly cromulent movie?

I have no questions about Wonder Woman, your honor. She’s perfect.