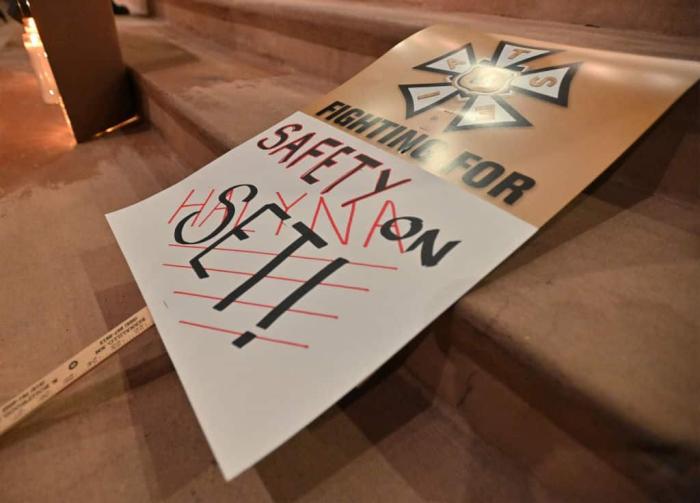 The head electrician on the set of the film Rust, where an accidental gun discharge resulted in the death of cinematographer Halyna Hutchins, is suing over the incident.

Serge Svetnoy, a friend of Hutchins, is alleging negligence that resulted in physical injuries and ‘severe emotional distress.’ Hutchins was killed when a prop gun held by actor Alec Baldwin was discharged. Assistant director Dave Halls has told investigators he failed to check all the rounds in the gun before handing it over to Mr. Baldwin. This claim came despite him calling out ‘cold gun’ as he handed the weapon over to the actor.

Mr Svetnoy’s civil lawsuit was filed in Los Angeles and names nearly two dozen defendants, including Baldwin and several crew members. During a news conference given on Wednesday, Svetnoy said that he had seen guns sitting unattended in the dirt a few days before the fatal shooting. He also described the ‘strange and terrifying whoosh of what felt like pressurized air’ when the gun went off. He was struck by ‘discharge materials from the blast.’

Meanwhile, a lawyer for the film’s armourer Hannah Gutierrez-Reed, who was responsible for the guns and ammunition on set, issued a statement on Wednesday reiterating that his client did not know how a live round came to be inserted into the gun that killed Hutchins. Jason Bowles is now alleging ‘sabotage’ and claiming that ‘Hannah is being framed.’ Santa Fe County district attorney Mary Carmack-Altwies told Good Morning America that investigators ‘do not have any proof’ of sabotage.

You don’t need me to tell you that these claims of sabotage from an entry-level armorer who failed to do the most basic aspects of her job are gross as all hell. The set of Rust was already reportedly a dangerous mess before Hutchins died. Gutierrez-Reed had already drawn numerous complaints over her ineptitude on other jobs.

As reported by The Wrap, she was the subject of numerous complaints on the Nicolas Cage film The Old Way mere months before Rust began production. She reportedly upset both Cage and other crew members by failing to follow basic gun safety protocols like announcing the arrival and usage of weapons onto the set.

Nobody has yet been arrested or charged over the death of Halyna Hutchins.


← 'The Daily Show' Wants You To Know That Black People Are Beekeepers Too | Amber Ruffin Takes Shots At Aaron Rodgers, Qanon Followers →