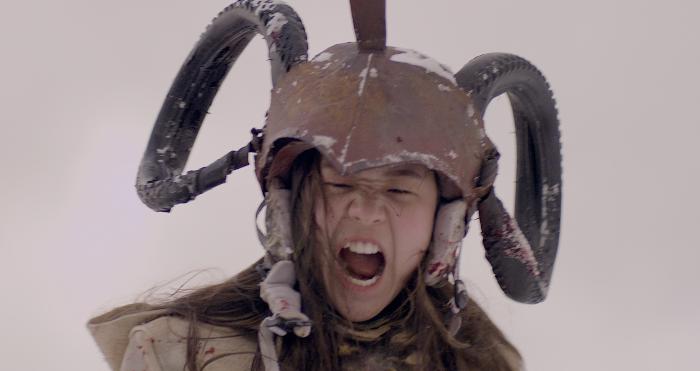 Fantasia Review: ‘Polaris’ Is One of the Most Unique Canadian Films Ever Made

KC Carthew’s Polaris is one of the most unique cinematic experiences from the Fantasia International Film Festival this year. Set in a frozen, post-apocalyptic landscape, the film features an all-female identifying cast and follows a young girl’s survival as she searches for her mother — who happens to be a polar bear.

Few survived the freezing that led to the end of the world. It’s 2144 now, but the earth is barren of both men and technology. One survivor, a child named Sumi (Viva Lee), was raised by a polar bear, and they are both fixated on following a bright purple star named Polaris. Both Big Dipper and Little Dipper share a connection to it and it has given Sumi magical powers that give her the ability to heal herself and others. The extent of her power seems much bigger than we are ever shown, but it may also be tied to her deep connection to the land. The trees can communicate with her; their cooing noises are a language that only she can understand.

One day, after hearing the trees’ screams, she comes across hunters who are chopping them down. After escaping the hunters, she finds herself all alone, having been separated from her mother. Now, it’s a race to Polaris — the guiding force she believes will reunite them. It’s not an easy journey, but along the way, she meets a mysterious girl seemingly alien from this planet. Together, they learn what it is to build trust and friendship — what will give them the strength to conquer the harsh elements and merciless hunters.

The film’s influence from Mad Max is evident, especially in the costume design and in the importance of the female characters, but it ends there as it attempts to distinguish itself from any influences. It’s bold to make a film featuring a language the audience wouldn’t be able to understand and include no subtitles. But by doing so, it emphasizes how isolated Sumi has been from being raised by a polar bear. Her language is grunts and growls, but all non-verbal communication is executed in a way that makes it easy for the audience to know what’s being said. The film feels aimless for the most part, as it sees Sumi hanging out with the people she meets along the way to wherever her final destination is. When she finds the “Frozen Girl,” as she is billed (played by Khamisa Wilsher), we see a friendship form and playfulness between them that’s a reminder that they are just kids - their journey of survival across this frozen wasteland becoming an impactful one.

The film doesn’t answer all its lingering questions - who is the Frozen Girl and why are the hunters so hell-bent on getting Sumi - and while it does feel aimless, it’s never boring. The threat of hunters catching up to Sumi is always a possibility, but she’s a skilled tracker, agile and carries the deadly swipe of a bear claw that allows her to defend herself with ease. Her run-ins with the hunters are violent; Sumi stains the snow with crimson. Lee articulates the strife of living in such an unforgiving environment and the pain of loneliness.

The ending is very rushed, not letting you sit with those final moments. However, transforming the narrative into an origin story and celebration of the night sky’s most recognizable asterisms is clever since so many sci-fi films involve space but don’t take time to truly gaze upon its stars.

Polaris is an indie sci-fi eco-adventure not to be missed. Just as David Cronenberg brought some “new flesh” to Canadian horror, KC Carthew could do the same with Canadian sci-fi if she chooses to stick to that genre. Here, we’ve discovered one of the most unique Canadian films ever made.