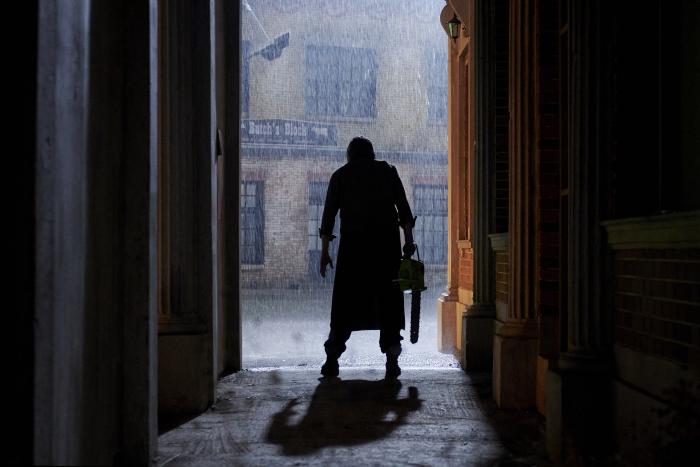 Don't F**k with the Original? More Like, Don't Mess with 'Texas Chainsaw Massacre'

*Stretches fingers across the keyboard* do we need the preamble about the “same named” re-quels of the past five years or so? The same one I probably wrote in my review of Wrong Turn, Halloween Kills, and the very cultural shift the fifth Scream tackled? Well just in case, a quick recap: we’re well into the new canon of creating horror franchise reboots and sequels, sometimes blends of the two, that recycle the original features’ names, and here’s another one. Texas Chainsaw Massacre (extreme Justin Timberlake as Sean Parker voice: drop the ‘The’), a new story that’s lops off previous canon and is a direct sequel to Tobe Hooper’s 1974 original, The Texas Chainsaw Massacre. Back in Texas, a new group of youngsters face off against Leatherface in a story that reaches back into the ’70s for some threads that keep it all connected.

Returning to mayhem, Leatherface is back for this fresh take on the 1974 rural horror. It’s a straight shot-to-carnage in this new era bloodbath (fifty years and the dude still has game), with fresh youthful characters and a new spin on political themes. While the original was seen to have veiled ideas about the Nixon era, 2022’s take has an on-its-face messy political spin that delivers some confusing commentary that’s difficult to untangle.

Melody (Sarah Yarkin) and Dante (Jacob Latimore) have dreams of fixing up an abandoned rural Texas town. Along with Dante’s girlfriend (Nell Hudson) and Melody’s Sister, Lila (Elsie Fisher), the pair of aspiring restauranteurs take a trip out to the near abandoned Harlow, Texas, hoping to spruce it up for investors to purchase the foreclosed properties. When they arrive, they discover a few undesirable tidbits; a gun-toting mechanic in an American flag hat, a confederate flag waving from one of the houses, and a woman and her son still living in a property they swear was up for grabs. After an uncomfortable altercation that sees the residents pried out by the police, Leatherface appears awoken, murdering the police and making a mask of one of their faces. The rest is a grisly blood soaked, well, massacre that reaches a peak just in time for the original final girl, Sally (Olwen Fouéré) to return triumphant to hunt the man of her nightmares.

This installment performs some cool magic to tie the new to the old. It opens with a video segment that plays with our taste for true crime documentaries and serves as an exposition recap, welcoming new viewers to the canon and confirming its connection to the 1974 original. John Larroquette returns as the narrator of this bit, and one of the original chainsaws even makes an appearance later on. Then, of course, finding out what both Sally and Leatherface have been up to, leading to their eventual faceoff is, well yeah, it’s pretty much what happened in Halloween (2018) but a version that culminates in a more effective passing of the torch.

Austin, Texas local, David Blue Garcia, sat in the director’s chair creating a film from Chris Thomas Delvin’s script (based on a story Evil Dead’s (2013) by Fede Álvarez and Rodo Sayagues). There’s not much to the story, and that’s what works: some kids come to Harlow, they awaken the beast, and a massacre takes place. The movie gets in and out in a short time, doing its job and exiting stage left. It’s exactly what it needs to be, skipping right to the juicy stuff, stacking grotesque and violent kill scenes on top of each other, ones that will make you shout, wince, and scream in good measure.

Where it unfortunately falters is in its bizarre political comment about which I wish it had exercised more restraint. I think this one, along with films like Wrong Turn (2021) and The Forever Purge, will enter a canon of films that will be collected for an essay ten years from now about American cinema reconciling Trumpism and the confederacy’s last stand. Texas Chainsaw Massacre, along with its cohorts, will make for interesting fodder, but for now feels like confused messaging that makes uncomfortable suggestions about survivor’s guilt and wielding a gun. It’s a messy take on the minority experience in red states and maybe suggests that the right-wing characters are only the enemy until you have a common one. But there’s always the possibility that it’s a story of what people would do, not what they should do, and maybe there’s a meatier comment about American culture than I was willing to allow. I imagine there will be varied takes on the messaging, especially when viewed with the twist, but it left me uncomfortable watching law enforcement and guns be the way out of the conflict for Black characters and victims of school shootings.

Put simply, this is an effective and well-created rural slasher that has kill scenes we’ll all be shouting about and climbing over each other to mention on “best of” lists. Leatherface’s return is jubilant and his “getting back his mask” moment is a magical form of gnarly. There’s so much delicious nastiness sprayed across the screen that makes this a standout reboot(quel) that should please franchise fans begging for more (or at least inspire passionate rage). But its muddy statements and confusing use of Sally bring nothing fresh to horror canon at a time where “refreshing” is the name of the game.

Texas Chainsaw Massacre is available on Netflix globally on February 18, 2022

← Theory: This Is Who Murdered Xavier in 'The Afterparty' [Potential Spoilers] | 'Uncharted' Fails In Every Conceivable Way →