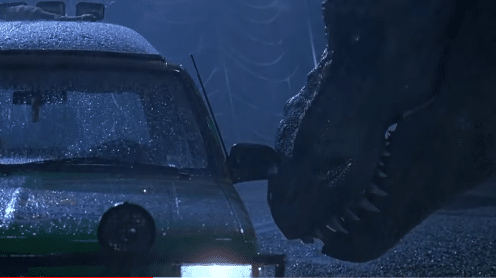 Dom vs The Dinosaurs: Could there be a Fast & Furious/Jurassic Park Mashup?

Back in April, Justin Lin and Michelle Rodriguez — director and star of the Fast and Furious franchise respectively - told Collider that the possibility of a Fast & Furious crossover with the Jurassic World franchise was not out of the question. They are both Universal properties after all. And, if Dom n’ The Gang are going to go to space, what’s to rule out Isla Nublar? Apparently, at least according to the quote at the end of the interview, not much.

Your feelings on both of these massive franchises may vary from utter exhaustion/disgust all the way to rapturous joy at the thought of MOAR DINOSAURS and/or MOAR CARS GO VROOM AND BOOM! I’m not here to judge. I’ve been a Jurassic Park fan since my dad took me to The Ziegfeld (RIP beautiful theater) to see the first movie when it premiered in ‘93. If they make more movies, I will watch them. It’s out of my hands. And, while I was late to the F&F game I think those movies are fun, and everyone looks like they’re having a good time being in them.

A lot of folks were talking about this idea on social media yesterday. Twitter user BossLogic even created some fan art for the potential movie:

Proof of concept that #FastSaga and #JurassicPark can cross over organically pic.twitter.com/qnwiPtToxr

Amongst my little circle, the general consensus was that we would absolutely watch this movie. But also that it sounded like a familiar concept. Friends and Foes, I present to you the short-lived, 1993 cartoon series, Cadillacs and Dinosaurs

Cadillacs and Dinosaurs lasted for 13 episodes (all of which seem to be available on YouTube) on CBS Kids. It’s set in a post-apocalyptic world where humans and dinosaurs co-exist after some sort of event that is mentioned in passing in regard to the protagonists rebuilding society. ¯\_(ツ)_/¯ It’s just dystopian enough that everyone is drawn to look like extras in Escape From New York but not quite dystopian enough that cars don’t run. And what cars they are! Listen, if I were living in a world with dinosaurs (oh, sorry, “SLITHERS”) running around, I would not be out there cruisin’ in a Caddy soft top. But, our hero Jack Tenrec (voiced by David Keeley,) has a dino pet, so he’s probably more concerned with image over safety. Sounds familiar, no?

Justin Lin, this movie is basically already written! Vin, are you listening? Make this happen! We demand Dom vs The Dinosaurs. We deserve Dom vs Dinosaurs. In Cadillacs! Nothing less will do.