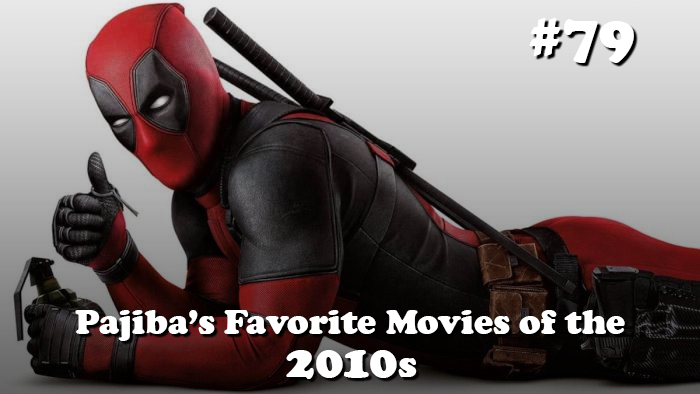 You’re damn right I ordered Deadpool as number one on my list of the best movies of the 2010s and I would do it again! YOU CAN’T HANDLE THE TRUTH.

Is anyone surprised right now? I think not. I think the bigger surprise - and back-stabbing nonsense - is that all of my colleagues obviously either ranked Deadpool in the wrong spot of their Top 20 list or excluded it altogether, putting it at number 79 out of 100. I am outraged and looking into my options concerning pursuing litigation. (Seth, I know you’re not really a lawyer, but I can’t really pay, so I CHOOSE YOU TO REPRESENT ME.)

I suppose you want to know why Deadpool made number one on my list. To that I say, do you even know me? I’ve been pushing for a Deadpool movie on this very site for what feels like FOREVER. I watched the Guardians of the Galaxy get greenlit when one lead was a tree and the other an anthropomorphized raccoon, yet FOX maintained Deadpool was a gamble.

I jumped for joy when “leaked” footage sent the internet - and myself - into a frenzy, prompting FOX to finally move forward with the flick. I read an early script and then read it again. I waited for this movie for a very long time. I walked into the theater on opening night, fully engorged and ready for action. Before the final third of the movie ever began, I turned to my friend Jesse and told him we were seeing Deadpool again. That night. And we did.

The Deadpool movie gave me Ryan Reynolds in a role that he was honestly born to play. It also took the essence of the character and his origins and kept them intact while playing around with other aspects to make it work. The fourth wall was broken multiple times and in such a seamless, fantastic way. It was perfection (mostly) and the promotional campaigns for it and its sequel were like EXTRA MOVIE PARTY TIME all over the place.

Deadpool: It didn’t top our list, but it did.

← Catching Up With The U.S. Women's National Team | Rian Johnson on Riki Lindhome and 'Knives Out' Cut Scenes →