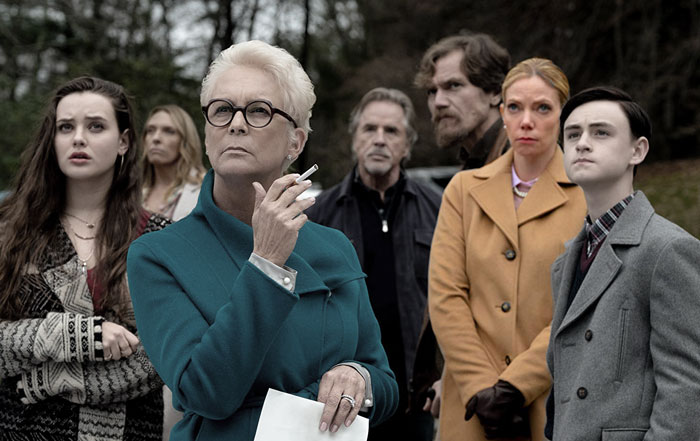 What Cut Scenes Are In The 'Knives Out' Trailer?

After months of rave reviews, tempting trailers, and a deeply quirky social media campaign, Knives Out is finally out! Writer/director Rian Johnson’s star-stuffed whodunnit unfurls a mystery with twists, turns, and shocking revelations. But you might be left with some nagging questions, like did Joseph Gordon-Levitt get a cameo? How does this impact the Best Chris standings? And what was the deal with Donna Thrombey?

Well, we’ve got answers, courtesy of Johnson himself.

Spoilers below for Knives Out.

Ahead of Knives Out’s Closing Night screening at Fantastic Fest, Pajiba had the opportunity to sit down with Johnson and dig into his heralded whodunnit (and his thoughts on Cats.) So, we asked about one scene that’s in the first trailer but not the final cut.

There, you see Donna Thrombey (Riki Lindhome), wife of publisher Walt (Michael Shannon) and mother of alt-right eavesdropper Jacob (Jaeden Martell). She gets out of a car, carrying groceries to find a tough guy smoking on her porch. Alarmed, she drops her bags. That’s it. And it’s not in the movie.

Asked about this cut scene, Johnson said, “We didn’t end up cutting a ton out. Usually, I chop a lot of stuff while I’m cutting. With this, it was just a few scenes. But one of them is Riki Lindhome’s, who’s a fantastic actor and she’s a great comedian. She’s in this duo Garfunkel and Oates, and they’re hilarious. She’s been a friend for years. She’s fantastic in the movie and one of her best scenes is in the trailer, but not the movie. When they’re cutting the trailer together, that stuff is always fair game.”

“There’s actually two things in the trailers that aren’t in the movies,” Johnson revealed. Then, he went on to give a few hints to their contents, explaining, “[Lindhome’s scene] is something that’s more about Walt, her husband. There was one for Walt, and there was one in regards to Toni Collette’s character that reveals just a secondary layer to their possible motivations [for murder]. Which we ended up realizing partway through that we didn’t quite need it. So we stripped those out.”

“It’s hard to describe the scene without spoiling anything,” Johnson said, before offering an assurance to fans, “But, they’ll be on the deleted scenes (on the home entertainment releases.)”

If you’ve somehow missed out on the pleasures of Garfunkel and Oates’ Youtube videos, comedy specials, and short-lived musical sitcom (now available on Amazon Prime), take a moment to enjoy “50/50.”

← 'Deadpool' Is The Best Movie Of The 2010s, But Ended Up At Number 79 On Our List | Why 'The Spirit of Christmas' is the Best Romantic Holiday Film →