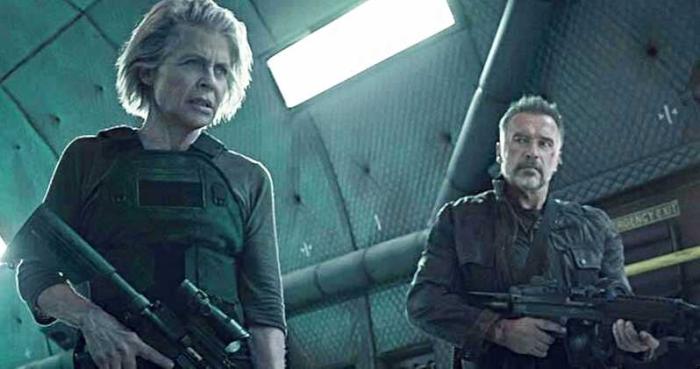 Terminator: Dark Fate is the sixth film in the Terminator series, and no matter how many times people come back from the future or go to the future, it seems that Skynet is still around to destroy us in the next movie, so what are we doing here, folks? Maybe we should just take the hint: Skynet is going to wipe-out humanity, no matter how many times Linda Hamilton or Arnold Schwarzenneger or the any of the other franchise figures — Nick Stahl, Claire Danes, Kristanna Loken, Anton Yelchin (RIP), Bryce Dallas Howard, Moon Bloodgood, Common, Michael Ironside, Jason Clarke, Jai Courtney, Lee Byung-hun — takes it out. Seriously: How many people remember Helena Bonham Carter was in one of these movies?

With Dark Fate, Skydance Media is pinning all its resurrection hopes on an actress, frankly, who hasn’t had a particularly memorable role in anything since 1991’s Judgement Day (with apologies to Pierce Brosnan’s Dante’s Peak). And you know what? I think it’ll work. I stopped giving a damn about Terminator movies after Judgement Day, but I’m here for Linda Hamilton and Mackenzie Davis. The trailer looks great, and Hamilton is gonna kick a whole lot of ass.