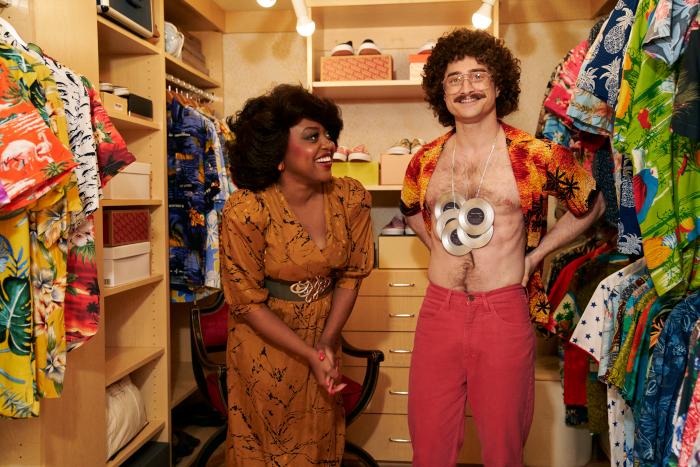 Some pondered if the musician biopic was dead after Walk Hard: The Dewey Cox Story so effectively tore apart the medium. But we’ve since had Rocketman, Bohemian Rhapsody, and even Popstar: Never Stop Never Stopping. The world isn’t done with the musician biopic nor is it done with dunking on them, so naturally, the greatest parody musician of our time had to have his turn.

Weird: The Al Yankovic Story has no interest in making you think it’s playing the story straight. It opens on Weird Al (Daniel Radcliffe) springing back into consciousness after being pronounced dead on an operating table. The film then flashes back to a young Alfred Yankovic (Richard Aaron Anderson) as he’s drawn to polka music to the chagrin of his aggressive father (Toby Huss) and meek mother (Julianne Nicholson). This fantasy version of Yankovic struggles to maintain his “normal life,” until he moves out and discovers a world outside of his parents’ watchful eyes.

With the support of his roommates, he writes a parody song about bologna that rockets him to local recognition. After meeting some tough executives (one played by the real Yankovic), he performs a live parody song follow-up which catches the eye of Dr. Demento (Rainn Wilson). Under Demento’s wing, Al finds immense and unchecked fame, until those who want to draft off of “Yankovich bump” (a boost in sales musicians get after Al parodies one of their songs) start to bring him down. Before long, a femme fatale vixen version of Madonna (Evan Rachel Wood) becomes Al’s controlling girlfriend, pushing him to give up on his dream of writing original music so he can riff on her “Like a Virgin.” Soon, Al descends and can only be saved by loving support and inspiration to write another world-changing parody track.

Revising history to change up Al’s relationships, rise to fame, and even the catalysts of his music all make for a hilariously backward take on Weird Al’s life. By using the parody artist’s real music, Weird: The Al Yankovic Story brilliantly throws comedy into a sense of reality, which allows this movie to land somewhere between Walk the Line and Walk Hard. Director Eric Appel co-wrote with Yankovic, which gave them some license to laugh along to adapting his life story. The idea of Yankovic making up a nonsense version of his own life is funny in and of itself and is reminiscent of Leslie Nielsen’s autobiography. Like that work, Weird relies on one gag and has to stretch it across an entire feature.

This slapstick-style comedy is born of Funny or Die and their 2010 faux trailer sketch also directed by Eric Appel. The movie often feels like a stretched-out sketch, and that’s because it is. The laughs come by way of an absurdist take on the musician biopic that’s subverting tropes while having a laugh in the face of reality. But the limit to the joke is hit when the film continues to rely on the premise that Al is the biggest star there’s ever been, completely untouchable and permeating the known universe. Instead of subverting or lampooning all other common threads and beats in biopics, it leans too heavily on the one gag and just has Al bounce his way through it, spending time with surreal moments that distract from the parody. The comedy style reminiscent of internet sketches is ever present, and it’s each viewer’s personal like or dislike for that tone that will determine how much of a laugh they’ll get.

Despite your varying comedy mileage, the hilarity is raised up by the earnest performance of Radcliffe. Radcliffe is electric and brings a sincere element to his silly execution that is bolstered by his comedic prowess. It’s him playing it straight in a pair of glasses with a curly wig that holds it all together and balances the comedy with biopic enough to make it read as parody.

Al Yankovic carved out space for himself as a parody artist, creating a specific niche accessorized with a Hawaiian shirt and an accordion. It makes sense that he would do his biopic that way, too, and refuse to play it any other way. Weird: The Al Yankovic Story marries Appel’s internet and sketch comedy with Yankovic’s parody artistry to create a spin on the biopic that has a good-spirited laugh in its own face.

Weird: The Al Yankovic Story drops on The Roku Channel on November 4, 2022