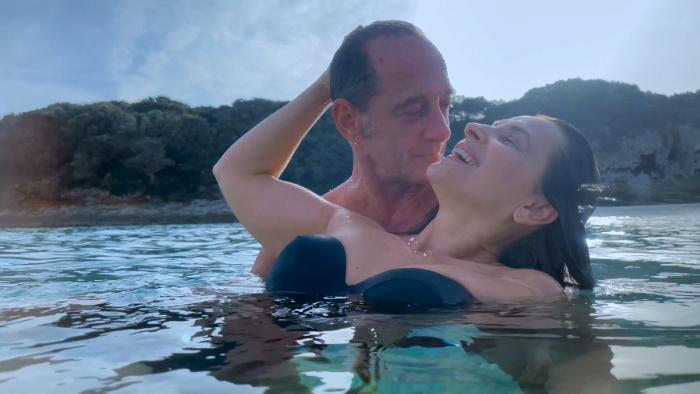 On our way to see Both Sides of the Blade, my friend assured me that it would probably be a gentler introduction to Claire Denis’s work than, say, her 2019 English-language debut, High Life. As opposed to High Life’s space-odyssey horror, Both Sides centers on a core cast of five characters: Sara (Denis’s ever-masterful muse Juliette Binoche), her aging lover and ex-con Jean (Vincent London), Jean’s elderly mother, Nelly (Bulle Ogier), his son Marcus (Issa Perica) whom Nelly raised while Jean was in prison for an unspecified reason, and—fatally—François (Grégoire Colin).

Sara is a thoughtful and capable radio journalist, conducting interviews on vital and difficult topics like violence in/diaspora from Lebanon and white society’s internalized racism. She manages these conversations with deft professionalism, smooth and undaunted. Jean is rebuilding his life from time spent in prison, trying to reconnect with his son from a previous relationship and pursuing his business passions as a sports recruiter. The two are tenderly, tremendously happy together in their small Parisian apartment. They have their small frictions, their challenges, but their life together feels settled, certain, and nurturing.

Enter François: a slightly younger man who was once Jean’s business partner and good friend as well as Sara’s serious romantic partner. It gradually emerges that both relationships were ill-fated. It’s strongly implied that Jean went to prison as a result of his work as a sports recruiter with François, while François vanished for years and escaped the consequences. Sara was left in the dust as well, heartbroken and mistreated, and she and Jean came together in the aftermath, rebuilding one another and settling, in late middle age, into a genuinely loving relationship.

As François reemerges in Sara and Jean’s life, he becomes the insidious incarnation of their unspoken impulses. François restarts his business with Jean and slowly inches closer to a fascinated and frightened Sara. Slow, understated silence bud between characters. The small space of the apartment becomes a testing ground of trust and resilience. It’s a simple premise, executed with Denis’s auteurish intensity and daring. The cast is truly minimal, the performances stunning, the emotional undercurrents too raw and vicious to be captured succinctly in a single confrontation or confession.

To add to the movie’s sense of despairing inevitability, François is—to put it mildly—a piece of shit. He is rude, cruel, needy, disrespectful, and occasionally childishly absurd in his indignation. He just sucks. Yet both Sara and Jean are drawn to him, craving his attention, to be part of the energy and flow of his life. It’s a draw so basic and desperate that neither can comfortably voice it, a kind of destruction madness worming its way into rational and ordinary lives.

Both Sides of Blade was not an easy introduction to Claire Denis’s work, but it was a brutal and brilliant one. The film is fundamentally about haunting: people haunted by their desires, by their pasts, by their sense of who they used to be and what they could reclaim. With a tremendous soundtrack by the Tindersticks (longtime Denis collaborators, from whose songs she took the film’s title), this very simple plot of desire and hope has no right to be as brutal and affecting as it is.

This is one of the first Covid movies that I’ve seen handle the pandemic really well, as a necessary facet of everyday life—utterly unremarkable in its commonplaceness. Characters avoid the metro and wear masks into their workplaces; in public scenes, there is a mix of masked and unmasked people. Jean covertly pulls his mask down when taking a phone call so that he can be heard more clearly. Nelly pesters Marcus to remember a mask. It’s a movie in which Covid is a casual and established detail, embedded in the flow of the story as cleanly and naturally as the undercurrents of tension and attraction that tie the film together.

Denis makes it all seem so easy, but the undeniable touch of mastery in Both Sides delivers a quiet gut punch. Denis rekindles previous collaborations with alchemical precision: this is her third film with Binoche, and her second cowriting with Christine Angot (following Let the Sunshine In). Both Sides is actually based on Angot’s own dialogue-heavy 2018 novel, Un Tournant de la vie.

In Both Sides, passion is an addiction and a danger, as well as a chance at meaning-making and salvation. Denis delivers a straight-shooting triumph of a film, spare and simple with not a line or a shot wasted. There’s no room to get lost, no room to look away. There are no winners and no answers. At one point, Jean paces frantically around the apartment, repeatedly exclaiming “The past coming back!” as if it’s both ridiculous and revelatory.

The movie retains that duality, a knife-edge balancing act—both painfully ordinary and profound, both finely crafted and delivered with a realist minimalism. In my opinion, it’s one of the best movies of the year, if not the best. It’s simply too good to miss.