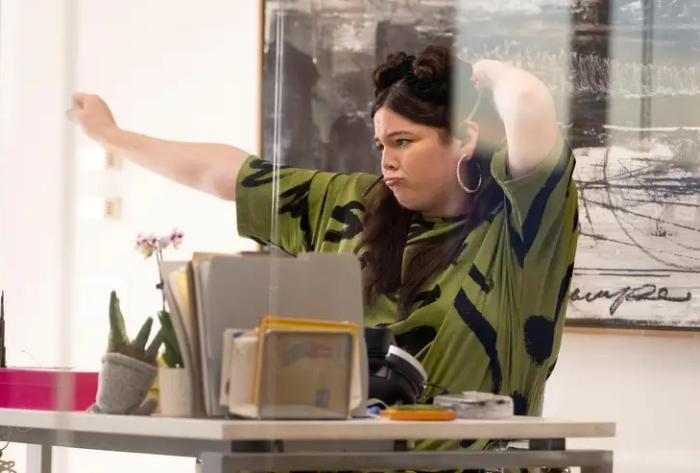 The [Chaos] Magic of Side Characters

With Emmy nominations announced and different theories on various snubs circulating, I’ve been trying to isolate the elements in my favorite shows that elevate a series from a moment in the endless stream to the main event (in the TV Guide that is my brain). In a television landscape thick with 118 eligible comedies, what is it that makes me follow a @nocontext Twitter account? Or seek out ‘Just the Kayla parts of Hacks’ YouTube compilations? Thanks to the whole world falling in love with the much-deserving Meg Stalter, I think I finally figured it out.

In the month since the success of Hacks Season 2, there has been much praise and even a term thrown around for characters like Stalter’s Kayla—the irresistibly incompetent assistant: Side Character. There is a Side Character Energy trend on TikTok. One of the original videos from @lolaokola states (while the user is — I assume — strutting), “The vibe is beloved side character with great outfits and funny one-liners … Like no! I will not undergo any character development nor will I grow as a person. I’m here to be funny and sexy, period.” The tag itself has over 2.1 million views. An article by Meg Mercado suggests possible side character activities for the hot days of summer: sipping piña coladas, staying inside, and hats (general). She lists Stanford (Willie Garson, Sex and the City), Miranda (Lalaine, Lizzy McGuire), and Emily Blunt (Emily is also the name of her character) in The Devil Wears Prada as examples of the trope.

This is where my personal theory and “canon” side character thinking diverges: Does Emily Blunt as a high-powered fashion magazine assistant really hit the same narrative beats as supportive best friend Miranda? No. They might both be side characters but are hardly analogous. Where Miranda is part of the series’ intended protagonist’s arc, Blunt is on a mission of her own (Paris). In fact, Blunt’s assistant has much more in common with side character du jour Meg Stalter … and run-of-the-mill side character Miss Kayla is not.

Side characters, and notable ones at that, are nothing revolutionary (yet somehow Stalter’s Kayla feels completely original). I was first introduced to the idea during Joe Posnanski’s Best Minor Television Characters Draft in 2018 on the PosCast with Joe Posnanski and Michael Schur. The terms of the draft were hotly contested, but they generally came up with the following criteria:

— Minor characters are not in the opening credits or are at least ten or eleven deep. And/or
— A minor character’s role does not expand.

Although their rules provide a fair framework, I think the “minor character” is more a vehicle of the traditional network sitcom, and side characters of the contemporary comedy/drama. Among the characters hypothetically drafted, Perd Hapley and Gunther fall into the former category, and Hector Salamanca, the latter.

Legendary side characters, by my account, include Trey (Broad City), NoHo Hank (Barry), and Lucille ‘Two’ Austero (Arrested Development). Is the je ne se quoi that separates them from other borderline guest/supporting actors similar to what Stalter brings to Kayla? Yes. I call it ‘chaos magic’: As in Kathryn Hahn’s line read of the century, “This is Chaos Magic, Wanda!”

What is chaos magic? Based on profiles I created of my six favorite “chaos magicians,” it’s the product of competing elements within side characters; while one character trait tends to help build out the narrative world of a series, another part of the character’s personality — knowingly or not — destroys said world by acting against its norms (i.e. chaos). For instance, Stalter’s Kayla is at once representative of nepotism in the entertainment industry and the false reality of its beneficiaries, while simultaneously wanting to prove herself to her boss (although she only works for “travel money” and doesn’t really need to impress anyone but herself).

In Kayla’s quest for Jimmy’s [her boss’] approval, she displays a markedly crude incompetence that breaks all post-Me Too workplace standards — turning what could have been an inside baseball narrative beat into one of the most entertaining dynamics on the show. Everything about her should be unlikeable, and a lesser show might have capped her at kooky assistant; however, Stalter, by playing up Kayla’s righteous disbelief at corporate discipline and puppy-dog loyalty, creates an inimitable light for her character and illuminates anyone who crosses her path.

Martin Short gets to the heart of it:

Martin Short praises @megstalter’s performance in #Hacks: “In every scene she’s in, where she has to be deeply unlikable and deeply offensive as an assistant, she does it originally.” https://t.co/Ck8Fz51vEk pic.twitter.com/nUj1KMBmq9

In many cases, “chaos magic” manifests as anarchical tendencies despite having close proximity to power (Shrill’s Ruthie/Patti Harrison, and Booksmart’s Gigi/Billie Lourd), or no tethers to reality besides a seemingly endless stream of odd jobs (Tati/Ana Fabrega, Los Espookys)*. Across the board, however, the crux of chaos magic is a sort of unaware eccentricity that not only allows characters to chill within narrative tension with little personal stakes … but become non-antagonistic sources of chaos themselves (Jo/Jessie Ennis, Mythic Quest).

Award distinctions are a hot topic among leading chaos magic thinkers. But, when Hannah Einbeinder (Ava, Hacks) is nominated as a supporting actress, where do the Kaylas of the world go for their hardware? There will probably never be a satisfying answer to classifying chaos magic side characters; however, some shows — by virtue of their cast — are better equipped to delineate actors between awards categories. Take for instance everyone’s favorite Chechen mobster/right-hand man, Noho Hank (Anthony Carrigan) of HBO’s Barry. Since Season 1, we have watched him go from full chaos magic to full supporting character. And, although his status was borderline chaos magic-supporting through Season 2, he still managed to nab a 2019 Emmy nomination and another for Season 3. But, how did the prince of chaos magic successfully evolve into a supporting character?

Noho Hank builds out the narrative world of Barry with exceptional attention to detail: Where Barry, our lead, hates life as an assassin but is good at his job, Noho Hank (a pseudo-foil) is very bad at his job and loves existing in the world of crime. Although we quickly understand Hank as a sort of mouthpiece for a much more dangerous leadership (Season 1), his uncanny ability to interfere for the worse — injecting his brand of cartoonish super-villain behavior — is such a contradiction to the mob’s desired power and subsequent violence that you almost can’t help but be endeared by him. As chaos magic goes, there is a certain beauty to characters that at once represent something (the Chechen mob), while acting in opposition to its very nature.

By Season 2 (still prime chaos magic), Hank seems to live according to Rom-Com standards, describing the truce with the once rival-Bolivians in a sunny montage with a Carrie Bradshaw-esque monologue on top. Clueless as to why anyone with such skill would want out of the fold, Hank-in Ellen drag-wears his heart on his sleeve to let Barry in on his new mission. However, his Season 2 lululemon naivety (unaware eccentricity) is all the more frustrating to “starting now” Barry. While Barry can’t seem to escape the role of villain, Hank happily casts himself as a romantic lead — not only giving himself stakes beyond just his life but shifting him from chaos-creator to chaos-experiencer (hence, Outstanding Supporting Actor Nomination 2019).

The best part of chaos magic is watching how it’s organically defined within each show. Is it vape-girl mystery a la BB (Euphoria) or via graphic birthday solo, reimagining their own birth as a power ballad (Ruthie, Shrill)? Is it detachment from the space-time continuum (Tati, Los Espookys) or hunger for administrative power (Jo, Mythic Quest) that defines the character’s relationship to our narrative world? Do they subvert said relationship, an empire, workplace standards, or the lifestyle of an Eastern European mobster? Any and all of these can combine to create a perfect storm of chaos or a half-baked punchline. The former is a gift that drives me to rewatch and recommend, and the latter, another five hours sacrificed to the endless stream.

(*I cannot recommend Los Espookys (created by Fred Armisen, Julio Torres, and Ana Fabrega) highly enough. Season Two is on its way, so you still have time to catch up. Original, bilingual, absurd, paranormal, Aquarian, masterpiece.)


← Claire Denis's 'Both Sides of the Blade' Is a Straight-Shooting Triumph | 5 Shows After Dark: 'Home Run Derby' on ESPN, 'Better Call Saul' on AMC →