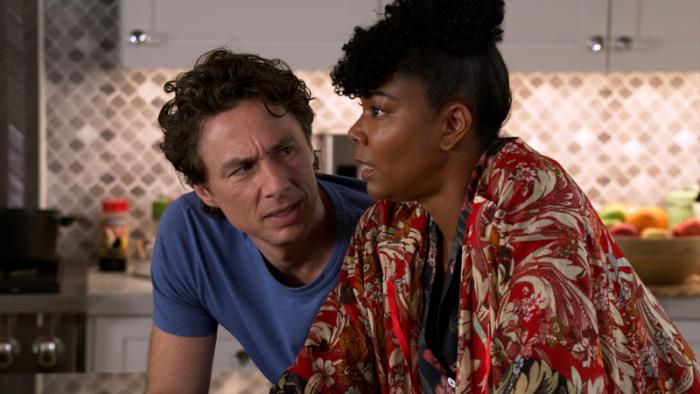 I am an unabashed fan of the Steve Martin Cheaper by the Dozen films, schmaltzy and committee-written as they may be. Cheap, manipulative family films are my kryptonite, and given my affections for Zach Braff and a family of my own with whom to watch the new Disney+ iteration, the 2022 version seemed like the sort of movie designed to embarrass me in front of both my kids and our readership alike (I will never live down getting teary-eyed while watching Steve Martin’s shameless, manipulative Cheaper by the Dozen 2 on a plane). Add Gabrielle Union and an echo of Parenthood with Erika Christensen, and apologizing for my inexplicable fondness for this movie seemed all but inevitable.

Alas, the Disney+ movie doesn’t quite work, even as the disposable warm and fuzzy family film designed to appeal to a broad audience that it is. That is to say, not even my younger, less discerning kids loved it, though they didn’t have many complaints, either. The problem is neither Braff nor Union nor the parade of adorable child actors with modest acting talents so much as it is a script that bites off way more than it can chew and a take-home message that lacks resonance given the Disney+ delivery device.

This iteration of Cheaper by the Dozen is well-intentioned in that it wants to tell a diverse, inclusive story (mostly, ahem), but in trying to be so broadly representative, there’s no time to tell the myriad stories it wants to tell. Zoey and Paul Baker (Union and Braff, respectively) are the parents at the center of the film. Zoey brings in Black children from her first marriage; Paul brings in white children from his first marriage (one of whom is disabled), as well as a South-Asian kid adopted after his parents were killed in a car accident; they have four biracial children together, and they also bring in a cousin with a checkered past who comes to live with them after his single mother enters rehab. In addition to tackling bullying, racial profiling, and classism, the husband, Dom (Timon Kyle Durrett), and wife, Kate (Christensen), from Zoey and Paul’s respective first marriages, also figure heavily in the plot — Kate is a flighty, woo-woo yoga instructor type who is entirely too intrusive, while Dom is a wealthy NFL player who has retired and decided to spend more time with his kids.

Amid the chaos of all those children, what drives the plot is Paul’s desire to expand his and Zoey’s restaurant, sell his breakfast sauce, and potentially franchise the business. Doing so allows the family to move into an affluent gated community in which they feel like outsiders (June Diane Raphael plays a racist Karen) but at the cost of losing time with Paul, who has to spend too much time away from home, saddling an increasingly resentful Zoey with all the parental responsibilities. Oh, and spoiler alert, but Paul is intensely uncomfortable with the idea of selling out to corporate suits who reject ingredients from local organic farms, and the intensity with which he hates the idea is mildly galling coming from a movie produced by the biggest entertainment corporation on the planet.

The screenplay comes from Kenya Barris and Jenifer Rice-Genzuk (Black-ish, Grown-ish), who between them have plenty of experience writing solid, diverse family sitcoms that address a number of cultural and social issues. That’s not the problem. The problem is that they’re trying to tell an entire season’s worth of stories in a single movie. There are 100 minutes and 15 characters, which means that the movie can only devote a few minutes to the twins afraid of monsters, the aspiring tennis star siblings, the basketball-playing eldest daughter, the nerdy Black son misunderstood by his athletic father, the punk rocker in the wheelchair, the cousin accused of theft, and the South-Asian kid bullied by his rich classmates for being “a terrorist,” not to mention the wine moms whom Zoey befriends. It’s a lot.

They cram all of this into one hour and 46 minutes. And yet, with all this representation, they couldn’t include a single gay kid? Disney’s gonna Disney.


← The Pajiba March 2022 Book Recommendations Superpost! | Netflix Brings Us A Whole New Genre of Spanish Horror in 'Honeymoon With My Mother' →