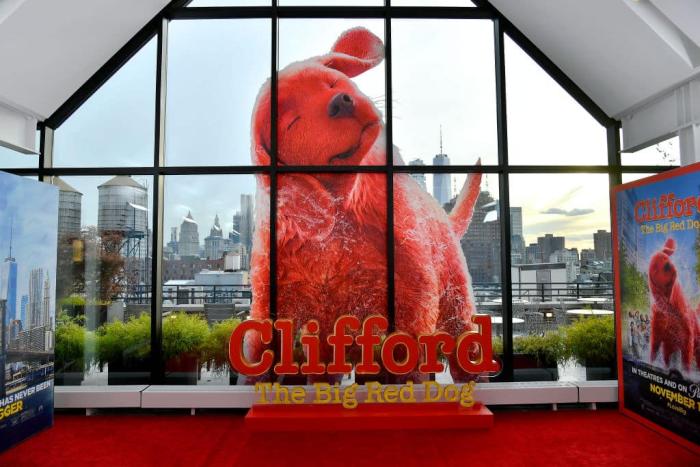 Box Office Report: This Giant Scarlet Canine Will Devour Us All!

Nobody expected Marvel’s Eternals to fall from the top spot of the box office in its second week, even with its smaller (by comparison) opening gross and expected drop. And it didn’t. Granted, the competition was slim and it’s not as though our perspectives on commercial profit in film are the same in the COVID era. But still, Marvel gonna Marvel. But there are things to discuss. Chloe Zhao’s epic brought in $27.5 million this weekend, which is a 61.4% drop from last week. That’s pretty sharp, although the film has now comfortably surpassed a $100 million domestic intake (Dune hasn’t gotten there yet). I think a lot has to be taken into consideration here, from divisive word-of-mouth to general franchise fatigue to, you know, the f**king plague. Mainly, however, I wonder if Disney’s audiences are now happy to wait for the inevitable streaming premiere rather than deal with the potentially unvaccinated masses at their local multiplex. They won’t have to wait long. The 90-day release window is over and I can’t see most places making their fans wait longer than 45 days now. I expect to see Eternals on Disney+ before Christmas, to be honest.

Coming in at number two is Clifford the Big Red Dog, which grossed a respectable $16.42 million for Paramount. Like Paw Patrol, don’t under-estimate kids’ fare with major IP recognition. That’s already more than the 20th Century/Disney animated movie Ron’s Gone Wrong, which has been in theaters for a month and only has $20.7 million in the bank domestically (seriously Disney, we get that you don’t give a toss about the properties you acquired from the Fox merger but could you at least try to look less evil about it?)

Oscar season is upon us and Sir Kenneth Branagh is here with one of the Best Picture frontrunners. Belfast is being primed as a top contender for the big prizes, which means we have to deal with an awards season where the Outlander and 50 Shades fandoms are wildly overpowered. Are you ready for this, my friends? Can we ever be ready? Anyway, Belfast made $1.8 million from 580 theaters. This one ain’t going away anytime soon.

The only other limited release of the week was the documentary Julia, which made $20,796 from five theaters.

This coming week sees the release of the nostalgia-bait sequel Ghostbusters: Afterlife, the biographical drama King Richard, and the black-and-white indie C’Mon C’Mon.