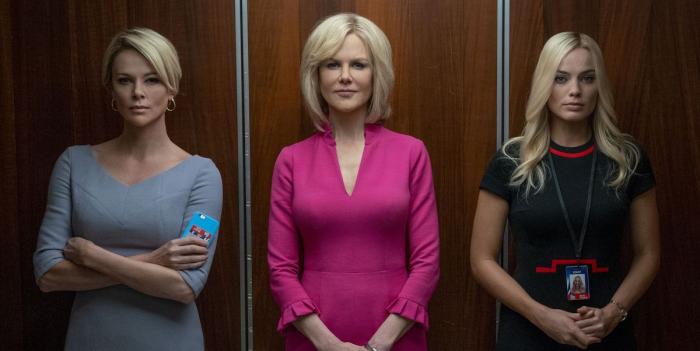 I watched Showtime’s Fox News/Roger Ailes series, The Loudest Voice, and while the performances were excellent, the series mostly made my skin crawl. I’m not entirely sure that we need more Fox News/Ailes content, although I do appreciate that Bombshell seems to be primarily centered on the women who helped to bring Ailes down instead of Ailes himself.

One of those women is Megyn Kelly, who is the worst, and I hope that Jay Roach manages to strike that balance between morally problematic people like Kelly and absolute monsters like Ailes and the many people who tried to defend Ailes (I saw Bree Condon’s Kimberly Guilfoyle — Don Jr.’s girlfriend — in the trailer cheerleading for Ailes, and tried to stop myself from vomiting). Mostly, I hope that Bombshell is an indictment not just of Ailes, but of Fox News and its entire culture.

What I can say for it, however, is that Charlize Theron is creepy good as Megyn Kelly, right down to Kelly’s voice.

If you are curious, Margot Robbie plays Kayla Pospisil, who is a composite character invented for the movie. I suspect her character is based on 25 different NDAs. Connie Britton, meanwhile, plays Beth Ailes; Nicole Kidman is Gretchen Carlson; Alice Eve plays Ainsley Earhardt; and that’s John Lithgow, obviously, as Roger Ailes.