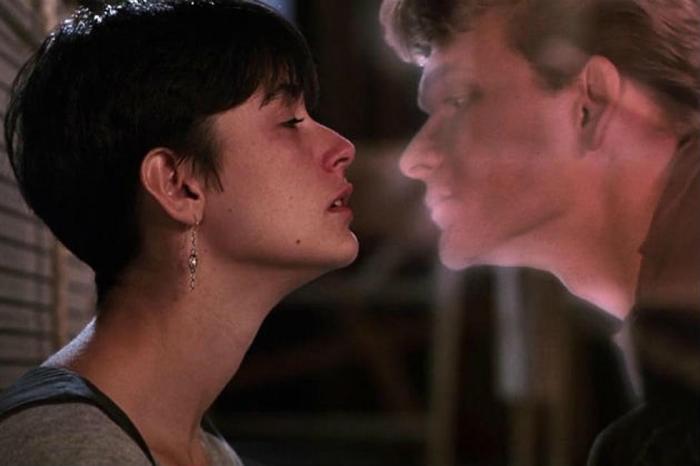 Ready to relish in romance? Seeking to splurge on seduction? Looking to laugh out loud over love? We’ve got you covered with the best romance movies now streaming on Hulu, Netflix, and Amazon.

Bridget Jones’s Diary (2001)
In her first Academy Award-nominated turn, Renée Zellweger stars as the titular “wonton sex goddess,” who is struggling to get her love life and career in order over a tumultuous year, peppered with yummy men, familial drama, and blue soup. Through it all, we like her just the way she is. Colin Firth and Hugh Grant co-star.
Watch here.

Ghost (1990)
Want some spooky thrills with your romance? Then revisit this iconic tale of love and loss. Patrick Swayze stars as a murdered man whose ghost refuses to move on until he reconnects and rescues his lover (Demi Moore) from a fearsome fate. Whoopi Goldberg co-stars in her first Oscar-winning role.
Watch here.

If Beale Street Could Talk (2018)
Acclaimed writer/director Barry Jenkins adapts the James Baldwin novel about the love that blossoms between Tish (KiKi Layne) and Fonny (Stephan James), two childhood friends in 1970s New York City. It’s a bond so strong that nothing can break it, not even when Fonny’s framed by a racist police force. Regina King co-stars in an Academy Award-winning performance.
Watch here.

My Best Friend’s Wedding (1997)
Julia Roberts headlines this quirky love-triangle comedy about a career girl who worries she’s made the wrong choices when her wedding safety announces he’s marrying someone else. Hellbent on reclaiming him, she goes on a quest that involves kooky relatives, bad karaoke, sneaky shenanigans, and—by God!—there will be dancing. Dermot Mulroney, Cameron Diaz, and Rupert Everett co-star.
Watch here.

Plus One (2019)
Wedding season can be stressful, not only for brides and grooms but also for the singles who feel silently shamed at a barrage of romantic nuptials. To make things more bearable, besties Alice (Maya Erskine) and Ben (Jack Quaid) decide to team up to take on this tough time. She’ll play wingman, hooking him up with willing bridesmaids. He’ll be her emotional support as she gets over a brutal break-up. Then, in the midst of awkward cocktail hours, cringe-inducing speeches, and a memorable graveyard visit, they find something they never expected.
Watch here.

When Harry Met Sally… (1989)
This classic collaboration between Rob Reiner and Nora Ephron asks the age-old question: Can men and women be friends? That’s how Harry Burns (Billy Crystal) and Sally Albright (Meg Ryan) start out. But over years of platonic intimacy, silly jokes, and being each other’s shoulder to cry on, something deeper—and hotter—blossoms. Bruno Kirby and Carrie Fisher co-star.
Watch here.

Always Be My Maybe (2019)
Ali Wong and Randall Park star in a gleefully wacky rom-com about two childhood friends who reconnect after 15 years in a meet not-so-cute. She’s a big deal restauranteur, who’s just broken up with her rich and fancy fiance. He’s working for his dad’s HVAC business and still playing in his old band. It’s awkward. But there’s something there. Something that even Keanu Reeves can’t deny. Daniel Dae Kim, Charlyne Yi, Karan Soni, and Michelle Buteau co-star.
Watch here.

Crouching Tiger, Hidden Dragon (2000)
Want your romance with some high-flying action? Revisit Ang Lee’s four-time Academy Award-winning epic. In the 18th century Qing dynasty China, forbidden romance blooms between two very different couples, throwing them all into an adventure involving a legendary blade, a noble swordsman, a rugged outlaw, and a princess whose mentor will lead her down the path of the warrior. Chow Yun-fat, Zhang Ziyi, Chang Chen, and Michelle Yeoh star.
Watch here.

Mansfield Park (1999)
This lesser-known Jane Austen adaptation is one of my personal favorites. Frances O’Connor stars as Fanny Price, a studious aspiring writer who lives as the impoverished, pitied cousin of her wealthy and reckless relatives. As she comes of age with her coddled cousins, she discovers a world of lust, romance, love, and tricky choices about each. Lindsay Duncan, James Purefoy, Jonny Lee Miller, and Hugh Bonneville star in writer/director Patricia Rozema’s daring vision.
Watch here.

Moonlight (2016)
Writer/director Barry Jenkins received his first Academy Award nominations for this Best Picture winner’s impeccable direction and Oscar-scoring screenplay. The highly acclaimed film centers on Chiron Harris, a Black kid growing up in a rough part of Miami, where violence and drugs are prevalent. Actors Alex Hibbert, Ashton Sanders, and Trevante Rhodes share the role as Chiron goes from boy to teen and to fully grown man who dares to reach out for the love he wants in his life. André Holland, Naomie Harris, Janelle Monáe, and the Academy Award-winning Mahershala Ali co-star.
Watch here.

Obvious Child (2014)
In this boundary-pushing rom-com from writer/director Gillian Robespierre, Jenny Slate stars as a twenty-something comic who’s spiraling hard from a break-up when she stumbles into a new romance and an accidental pregnancy. How do you tell the great new beau in your life that you’re planning to have his abortion? The answer is surprisingly sweet and deeply funny. Gaby Hoffmann, Richard Kind, and Jake Lacy co-star.
Watch here.

To All The Boys: P.S. I Still Love You (2020)
The hotly anticipated sequel of To All The Boys I’ve Loved Before offers a new adventure with Lara Jean (Lana Condor) and Peter Kavinsky (Noah Centineo), which involves her unresolved crush on John Ambrose McClaren (Jordan Fisher), a friendship with a Golden Girl retiree called Stormy (Holland Taylor), and a new love interest for her widowed dad (John Corbett). Love is in the air, and it’s driving Lara Jean mad!
Watch here.

Earth Girls Are Easy (1989)
Want something sexy, song-filled, and out of this world? Check out this cult classic about a California girl whose life is turned upside down when three hunky aliens crash-dive into her swimming pool. There’s plenty of laughs courtesy of co-stars Damon Wayans, Jim Carrey, and Julie Brown. However, the biggest draw for this weird gem is the onscreen pairing of real-life couple Geena Davis and Jeff Goldblum, playing interstellar lovers.
Watch here.

Destination Wedding (2018)
Feeling jaded about romance? Then you might appreciate the acerbic charms of watching Winona Ryder and Keanu Reeves play a pair of misanthropes who meet-cute during the tiresome obligation of a destination wedding. The jokes are barbed. The romance is salty. But the chemistry is undeniably hot.
Watch here.

The Handmaiden (2016)
Park Chan-wook’s radical adaptation of Sarah Waters’s novel Fingersmith is not for the faint of heart, but it is phenomenal. Set in Japanese-occupied Korea, this romantic drama revolves around a gorgeous and wealthy heiress, who is haunted by dark secrets and an unspoken desire. The story begins with a con man who craves her fortune, looping in a clever maid, a conniving uncle, wild twists, and a conclusion that is brutal and brilliant. No wonder it’s one of our favorite films of the decade. Kim Min-hee, Kim Tae-ri, Ha Jung-woo, and Cho Jin-woong star.
Watch it here.

Overboard (1987)
Okay, so the premise of this zany rom-com has grown increasingly problematic over the decades. However, it’s undeniably fun to watch real-life lovers Goldie Hawn and Kurt Russell fight and fall for each other playing two people from very different sides of the tracks. Russell stars as a hard-working handyman who’s humiliated by Hawn’s scowling socialite. Then a twist of fate turns the tables and sparks an unexpected flame.
Watch here.

What If (2014)
Harry Potter’s Daniel Radcliffe is all grown up and falling in love in this jaunty rom-com. The moment he meets Chantry (Zoe Kazan), hopeless romantic Wallace (Radcliffe) is smitten. But she’s got a long-time boyfriend. Talking celebrity autopsies and outrageous recipes, their journey from friends to more than is weird and winsome. The super mega bonus of this movie is that it also boasts a B-plot of Mackenzie Davis and Adam Driver falling hard and fast, sparking the latter to proclaim, “I just had sex and I’m about to eat NACHOS! IT’S THE GREATEST MOMENT OF MY LIFE!”
Watch here.