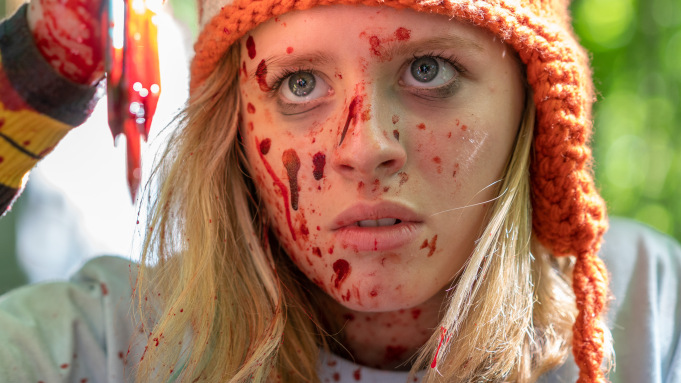 What if Louise Belcher, the hat-loving pint-sized offspring of the Bob’s Burgers family, went full-on John Wick against a pack of neo-Nazis led by Paul Blart: Mall Cop?

That’s the impressive hook that elevates Becky, an otherwise conventional home invasion horror tale, into an unexpected guilty pleasure. The set-up will probably sound familiar to you: A family heads to their isolated vacation home for the weekend, stopping briefly at a gas station where, on the TV overhead, a news report announces that a group of violent convicted felons has escaped their prison transport nearby. The two groups are bound to meet. A good time will be had by no one. The only question is: who will survive the night? To be sure, the premise is almost too well-tread, filled with unexplained MacGuffins (the convicts are looking for a magic key, for their race war!) and unjustified character shifts (a tween girl goes from angsty to stab-happy… just because!). There’s no real message to be gleaned about our justice system, or racism, or teenage mental health. There’s no real anything to be had in this middle-of-the-road B movie… except the pure, visceral joy of watching a fearless and unforgiving young girl take out four big, burly white supremacists in inventively gruesome ways.

And trust me, that’s more than enough!

The titular Becky (Lulu Wilson, Sharp Objects) is a 13-year-old still grieving the loss of her mother to cancer. She’s sad, sure, but she’s converted her grief into rage. She’s angry at the world, but mostly at her father, Jeff (Joel McHale), whom she resents for moving on with his life after only a year. He’s invited his new girlfriend Kayla (Amanda Brugel) and her son to stay with them for the weekend at their cabin in the woods and announces that he’s planning to get remarried. By the time Becky has stomped off into the woods to sulk, the movie has succinctly laid out the bare bones of the family dynamic at play: Becky is stubborn and immature, but justified in her anger, while Jeff means well despite handling everything poorly. Mostly, though, we need to understand that Becky has no great affection for anyone in the house other than her pet dogs (and be warned, that’s another angle this movie pulls from John Wick…). 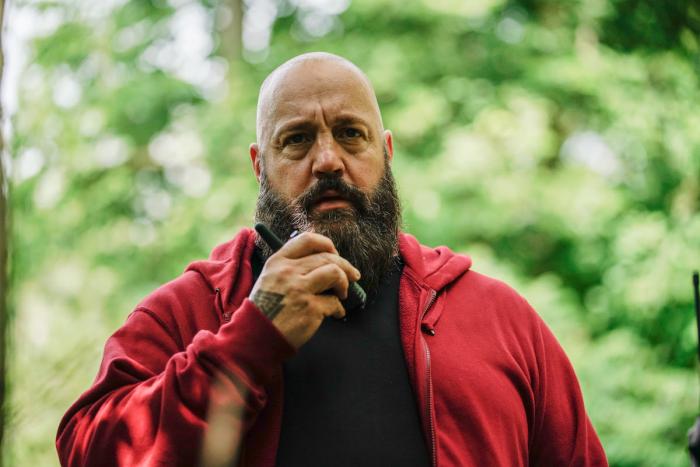 Enter Kevin James, the King of Queens himself, with a swastika tattooed to the back of his head and leading the dangerous group of escapees to Jeff’s doorstep. He holds Becky’s family hostage while she holds that inexplicable key hostage and the rest of the film is a well-executed showdown between the two unlikely adversaries. Though the film doesn’t give James much to work with aside from menacing-with-a-side-of-master-race, it still proves a welcome departure. There’s no hint of the funny everyman in his performance, and though it’s hardly unusual to see a comedic performer break bad for a change of pace, it works in part because he breaks so bad here, and in such an unglamorous way. For that matter, McHale is also deployed perfectly as the imperfect dad — an underwritten role that comes alive because of the shorthand of all his other performances, existing in our memories. But it’s Lulu Wilson, in her knit chipmunk hat and blood splatters, that provides the much-needed chaos that keeps the film on track — and keeps us on the edge of our seats. Though Becky’s pain at first seems so sympathetic, the way Wilson uses it to transform the character into something feral and unrepentant is astonishing. This is not a girl fighting for survival, and there is nothing noble or heroic about her fight. Becky just wants vengeance. She takes the chip off her shoulder and wields it as her weapon (alongside broken rulers, colored pencils, outboard motors and a lawnmower). In her own way she becomes harder and fiercer and more formidable than… well, a pack of Nazis. There’s a strange purity in the way the film, directed by Bushwick’s Jonathan Milott and Cary Murnion, establishes her as a viable opponent without trying to redeem her character. The intruders may underestimate her, but the film never makes the mistake of looking down on her. Though the premise may seem stale, it’s Becky herself that’s fresh: a tween allowed to be as hard and broken as our biggest blockbuster leading men.

Basically: you may come to Becky to see Nazi Kevin James, but you’ll stay to see a 13-year-old girl open a can of whoop-ass on him.

Becky is available now on VOD