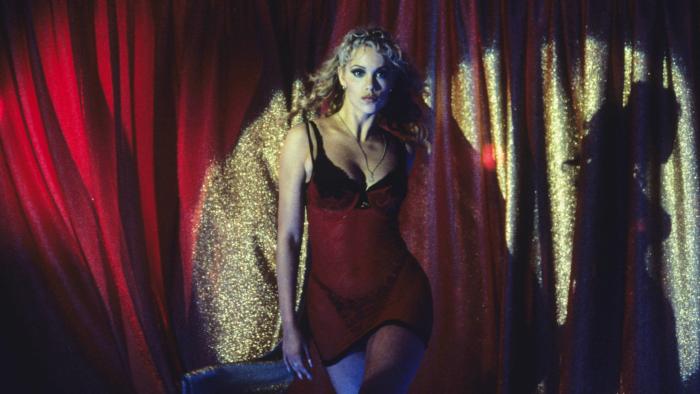 Sometimes there’s nothing as good as a bad movie. It might be senseless. It might be stupid. It might be trash, but it hits the spot. For some, it becomes a guilty pleasure, for others a proud passion. Over decades it might be re-evaluated as a cult classic or a misunderstood masterpiece. Superb documentaries have been made about this journey from infamy to quirky acclaim. Best Worst Movie and Scream, Queen! My Nightmare on Elm Street centered on slandered horror sequels whose idiosyncrasies came to be embraced by their stars and an earnest following. Documentaries like these explore how there’s so much more to a film than whether it’s “good” or “bad.” In this tradition struts You Don’t Nomi, a doc that uncovers the critical re-evaluation of the notorious Showgirls.

You Don’t Nomi features interviews with playwright David Schmader, entertainment journalist Haley Mlotek, and Adam Nayman, who wrote the book It Doesn’t Suck: Showgirls. Each has a deep and unapologetic appreciation for the film, which they feel was misunderstood. In a series of lectures, they take turns exploring the artistic depth of the film, the technique of symbolism and irony it displays, and how it fits into the grander understanding of Verhoeven’s work as a whole. To illustrate their points, director Jeffrey McHale fills his doc with footage from Showgirls as well as any film or TV show that remotely relates to its discussion, including Basic Instinct, Black Book, Starship Troopers, Elle and Saved By the Bell. He never cuts to footage of the interview subjects. So instead of talking heads, they are only floating voices doggedly explaining the unrecognized glory of Showgirls.

The same technique was employed in 2012, when Rodney Ascher made the mind-bending Room 237, which investigated various fan theories about the hidden messages in Stanley Kubrick’s The Shining. In that doc, this device worked, because it felt like you were being sucked into the minds of the fans as they spun conspiracy theories of faked moon landings and pointed to banal set dressing as a smoking gun. Ascher achieved an intimacy with the technique that drew us in, urging us to look closer at every nook and cranny of the Overlook. McHale does not achieve such intimacy. Perhaps it’s because some of his subjects speak in a snoozy monotone, giving the sense that this is a lecture of something we should already understand. Even when these experts speak with passion, we don’t see it. Instead, we see the jolting overacting of the Showgirls cast, compared to which even an orgasmic exaltation about its weird sex scenes would seem tame.

You Don’t Nomi has plenty of ideas, but little sense of cohesion, as each expert has their own thesis to break down. There’s little attempt to knit their arguments together, so the film feels frustratingly disjointed, like a podcast that’s skipping. As such, there’s little sense of the journey of Showgirls from reviled to revered. No one from the film is interviewed for the doc, so McHale is left to pluck from print interviews, snippets of talk show appearances, and Berkley’s photo-op appearance at a recent revival screening. There’s a lot of speculation and conjecture about what the film now means to its makers, but little actual substance in this regard. As such, the doc begins to feel like a long-winded lecture or a cocktail party conversation from which you can’t escape.

That is until McHale gets to Showgirls! The Musical!, an off-off-Broadway parody that boasts songs like “F*cking Underwater,” “Don’t Lick That Pole, Girl,” and “The Whorrior (A Whore And a Warrior).” FINALLY, a doc about an absolutely over-the-top film gets the injection of energy it deserves. April Kidwel (pictured up top) belted out and bared her breasts to do Nomi justice on stage. In You Don’t Nomi, she shares how playing the part empowered her, helping her overcome sexual assault trauma and reclaim her body as her own. It’s the film’s most powerful section, communicating most clearly how even a “bad movie” can have a profound impact on its audience. While we aren’t shown Kidwell in a talking head interview, McHale does—thankfully—give us a peek of her stage performance, which is exuberant and mesmerizing. At last! Here is the passion for cinema made cinematic! Here the story begins to come alive! Sadly, Kidwel’s insight makes for a minor section of the film, then we’re plunged back into lectures and slide shows.

All in all, You Don’t Nomi offers bold ideas but in a bland packaging that makes it a disservice to the trash masterpiece it came to praise.

You Don’t Know Me is now on digital.