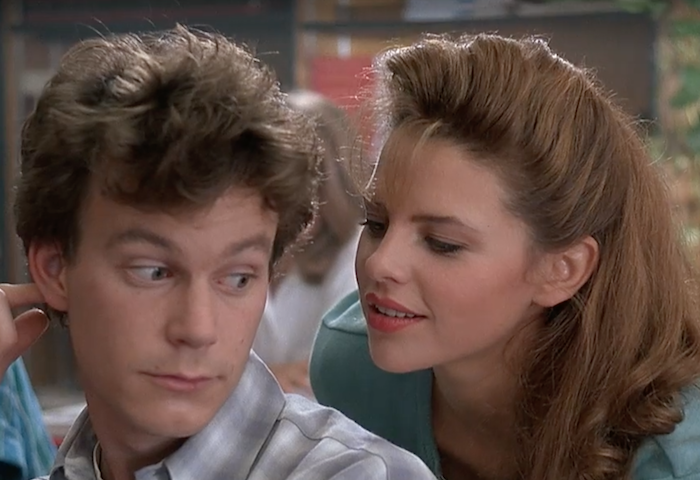 Almost 30 Years Later, ‘My Boyfriend’s Back’ is still the Best Zombie Love Story Out There

The more I think about it, the more I believe that 1993 may be one of the best years for movies ever. Those of you who f*cking love Hocus Pocus are already nodding your head vehemently in agreement, but for those of you who may need a refresher course in what goods Hollywood had to offer us 27 years ago, I’ll list a few classics for you: The Fugitive.

Fine, I will: Tombstone, Dazed and Confused, Jurassic Park, Groundhog Day, Cliffhanger, Benny and Joon (which, along with Cry Baby, is the best of what Johnny Depp has to offer). I could go on but I won’t because the move we’re really here today to discuss is one of the best 1993 has to offer. I am, of course, talking about My Boyfriend’s Back, a movie that shit the bed, so to speak, back then but has since become regarded as a fun, quirky movie about a zombie boy named Johnny, and his undying love for his teenage crush, Missy. I mean, at least that’s how I regard it.

I love this movie. I watch it every few years or so, and it always floors me the talent pool it was able to assemble.

First, there’s Johnny played by Andrew Lowery, which granted, he’s not a household name, but he was in the original Buffy the Vampire Slayer so in my house he is. He was also in School Ties a movie I’m sure I saw at some point but remember none of. Missy is played by Traci Lind, who is good and who also realized Hollywood is a cesspit and got the hell out of dodge after 1997, so you may not be too familiar with her. Don’t worry, I’m getting to the big names: have you ever wanted to see Philip Seymour Hoffman as a homicidal, asshole teenager? What about Matthew Fox before it came out that he was an asshole and at least one co-star can’t stand him? Not good enough for you? OK, how about a little-known actor with the name of Edward “I was in Lost Boys, which is a cool as shit movie” Hermann? Cloris Leachman do anything for ya? Mary Beth Hurt? Matthew McConaughey in one of his very first roles not good enough?

If none of this sounds enticing, congratulations, you sound exactly like moviegoers in 1993, because like I said, this movie did very, very poorly.

Perhaps it was the premise of playing an undead teenager coming back to ask his crush to the prom? Or the name? Or the lack of real promotion around it back then. Or maybe it was the bad reviews? Or maybe you too were a mom who thought the trailer looked gross so you wouldn’t take your then-8-year-old daughter to the theaters to see it and she had to wait three long years until it came on TV on a weekend afternoon so she could finally experience the magic of a zombie whose ear falls off when he’s making out. Thanks, Mom.

The point is, you may not be well acquainted with this particular 1993 movie, which all I can say is—it’s your loss. It is the best zombie love story of all time and yes, I’ve seen Warm Bodies. I like that movie. It’s just not as good as this one.

I recently remembered this movie existed (I mean, I like it a lot, but I don’t think about it constantly, like Con Air) so I bought the Blu-ray special edition of it, and friends? It still holds up on my 20th viewing. I’m sure it will hold up on my 21st, too.

In addition to being fun, the soundtrack for it is peak early ’90s, in the best way possible. I’m very certain I bought it on ebay in 2006. Primarily for this song, which plays over the opening credits:

Also for this one, the big ballad at the end of the movie was made by none other than the band they formed from the New Mickey Mouse Club because this movie was released by Touchstone Pictures and that’s what they call Disney cross-product promotion synergy. Here it is, if you really want to experience a deep cut:

Now close your eyes, and imagine an emotional climax of a zombie and his crush at prom.

Tell me that doesn’t sound like it would be excellent?

Guess what—it is, and you can experience it for yourself if you just ignore all the haterz from 1993 and watch this damn movie already.

As Johnny the Zombie himself will prove to you—it’s never too late to take a chance on love…and movies about teen zombies coming back from the grave in order to go to prom.