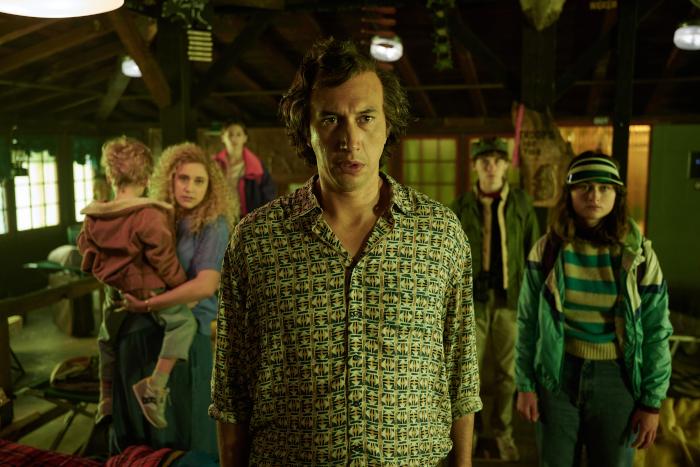 Quick, tell me what you picture when I ask you to picture “A Noah Baumbach Film.” If what you pictured was sexy astrophysicists accidentally discovering alien superstructures encased inside of the Moon then I am sorry but you were thinking of Roland Emmerich and his disaster picture Moonfall from earlier this year, but thanks for playing. No, Noah Baumbach is better known for dramatizing the panicky wordplay of loquacious urbanite intellectuals, people like Frances from Frances Ha and the wall-punching Sondheim-crooning divorcees of Marriage Story; people whose sentences are always ten steps in front of them tripping them into relationship-based disasters.

And yet! What to make of White Noise, Baumbach’s brand new Don DeLillo adaptation which opened the New York Film Festival (hitting theaters for Thanksgiving and Netflix for New Years) and which hinges on the sort of epic catastrophic disaster that fly-boys like Emmerich and Michael Bay orgasm to every time they close their eyes? This is a very strange marriage indeed, Baumbach and a good chunk of this material, but I don’t think we need to call in those cut-throat divorce lawyers played by Laura Dern and Ray Liotta in Baumbach’s last movie—Delillo’s book is strange enough all on its own, and what results from this collision is absolutely fascinating and messy stuff that bewilders and delights in equal measure. Watching the “unadaptable” get adapted always carries a high-wire frisson, but here it’s frizzier than ever.

If you’ve never read the 1985 novel here the gist—set in the time period it was written, Jack Gladney (played here by Adam Driver) is the foremost Hitler expert in the world. Yes, as in Adolph. That precise Hitler. Even though he’s only recently learned to speak German, Jack teaches Hitler Studies at the College-On-The-Hill, alongside his bestie Murray (Don Cheadle), who has his own similar obsession with Elvis Presley. (An overlapping lecture between the two that parallels the mamas-boy fixations of those two historical figures is a miniature tour-de-force in a film that has several such one-of-a-kind little marvels, all of which you might feel like you dreamed the next day.)

While Baumbach (who wrote the script) is obviously more than up to the task of adapting Delillo’s delightfully deranged skewering of academia, the story’s really more focused on Gladney’s Brady-Bunch-esque home-life, where his fourth wife Babette (a marvelous Greta Gerwig, finally back in front of the camera again) helps raise their mixed brood of children, whilst going through her own, you know, whole thing. (Mainly Babette is doing a whole lot of obsessing about death basically, which will come in handy soon enough.) Brood-wise the rest of the clan consists of the eldest Denise (Raffey Cassidy from The Killing of a Sacred Deer), Heinrich and Steffie (played by real-life siblings and children of actors Alessandro Nivola & Emily Mortimer, Sam and May Nivola) and then there’s the littlest moppet Wilder, who’s the only child born so far out of Babette and Jack’s union.

The focus on the family (to borrow a phrase now poisoned by religious bigots) becomes especially pronounced as we plunge headfirst into the film’s second act, as a spectacular Final-Destination-esque collision between a tanker truck and a tanker train creates a mysterious “airborne toxic event,” although much comedy is wrung the news-stations taking the scenic route to finally get around past their “plumes” to that terrifying description. Indeed by the time they’ve gotten their definitions straight it’s past time to evacuate, and the Gladneys find themselves caught in the sort of toxic cloud shenanigans that the aforementioned Emmerichian masters of global carnage rub out in their sleep.

Baumbach has himself a blast here though, producing images of the kind of scope that Margot going to that wedding never gave him excuses for—I find myself still spooked by a long pan along a furniture-shop’s long wall of plate-glass windows as seen from the street as the Gladneys pass by, where silhouetted figures stand pressed against the glass; it’s the sort of hauntingly mundane image Spielberg crafted in his underrated War of the Worlds, where suburbia meets hellscape. (And a quick shout-out to Danny Elfman’s score, his best work in ages, which enlivens and unnerves everything it touches.) Indeed there are several very scary moments scattered about here, and Baumbach meets them head-on—I’d love to see what he could do with a horror movie next.

Where White Noise goes from there I’ll leave to you to discover, as it’s a singular journey where the word singular doesn’t seem to do it even a whiff of justice. You will find yourself thinking of other films and Baumbach leans into that—I’ve already mentioned a few, but another that kept popping to mind was David Cronenberg’s own Delillo adaptation Cosmopolis, most especially in the last act as pro-active behavior is met with the boisterously absurd. But ultimately White Noise is only what a Noah Baumbach adaptation of Don Delillo’s White Noise could ever have been. It’s funny and weird and exhausting and frustrating and bustling with more ideas and observations than nearly any other movie you might see this year. Imagine Don’t Look Up if it had been made by competent filmmakers, and then multiply that by as many strands as there are in Greta Gerwig’s important hair. It’s some truly infinite jest, baby.


← Now on HBO Max: 'Saving the King' Shows Us Why We Need the Spanish Spinoff of 'The Crown' | Is SNL Stealing Sketch Ideas Now? →


Image sources (in order of posting): Netflix,
Most Viewed