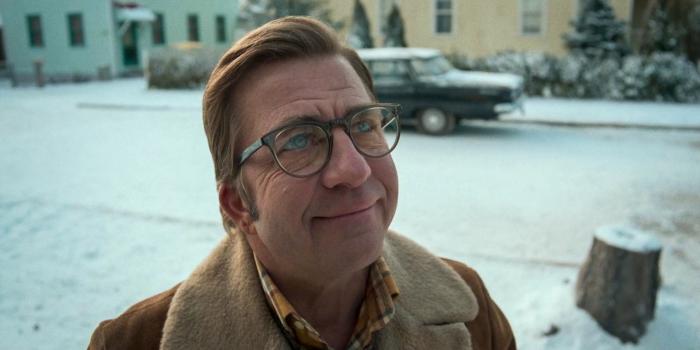 'A Christmas Story Christmas': Sometimes It Really Is the Thought That Counts

“My Old Man.” I remember when that was how every boy described his father, usually right before a complaint. “My Old Man made me stack cordwood until dark.” “Oh yeah? My Old Man made me shovel our driveway and the neighbor’s too.” You could hear the capital letters. The Old Man was a Presence, an authority figure always over your shoulder whether or not he was there. He had a weight in the world that went beyond his physical body. He could be tough but also sometimes delivered unexpected kindness. And when he’s suddenly gone it leaves a physical void in the world. His absence is a vacuum that feels impossible to fill, even to a grown man who knows it’s his turn.

That’s where Ralphie Parker (Peter Billingsley) finds himself in A Christmas Story Christmas, a direct sequel to the 1983 holiday classic TBS airs in a 24-hour marathon beginning every Christmas Eve. It’s December 1973, and Ralphie’s a struggling writer in Chicago when his Old Man (Darren McGavin) unexpectedly passes right before Christmas. Ralphie returns home to help his mother (Julie Hagerty, taking over for Melinda Dillon) keep the holiday traditions going, and deliver to his own kids the kind of Christmas memories his Old Man left him. It’s an impossible task made more difficult by financial concerns and Ralphie’s inability to sell his first novel. Supporting him in his endeavors is his wife Sandy (an underutilized Erinn Hayes) and a cadre of characters from Ralphie’s childhood, including Flick (Scott Schwartz), Schwartz (R.D. Robb), and childhood bully turned cop Skut Farkus (Zack Ward).

I have a great deal of affection for A Christmas Story. A lot of it felt very familiar as a kid. The bullies, the terrible clothes, wanting a BB gun more than anything else in the whole world. It was a heaping helping of holiday comfort food. A Christmas Story Christmas, by comparison, is a casserole made from the leftovers; reminiscent of the original, but without its full charm. Peter Billingsley takes over narration from long-deceased humorist Jean Shepherd, and also handles the screenplay along with Nick Schenk, writer of Gran Torino and The Mule. Ralphie’s dreamy fantasy sequences are still a thing, as are the moments he breaks the fourth wall and looks directly at the camera. It doesn’t work as well as it did when he was a child.

Ralphie’s own children are more plot devices than characters, though they’re both good in their own right. Daughter Julie (Julianna Layne) is a little mastermind and son Mark (River Drosche) visits Flick’s bar, making the kind of memories with his Old Man that would get today’s parents arrested, more’s the pity. Every little kid should spend some time on a barstool, learning the adult mysteries of gossip and avoiding one’s spouse. This is Ralphie’s story and so wife Sandy is much more of a supporting role, though her interactions with her sweet but occasionally difficult mother-in-law are funny. Both Erinn Hayes and Julie Hagerty are so good in their own right that it’s a missed opportunity that they don’t have more to do. And though few of them are what you’d call experienced, I appreciate that the rogue’s gallery of grown-up childhood friends and enemies are all played by their original actors. There’s what feels like genuine camaraderie between Flick, Schwartz, and Ralphie.

Like A Christmas Story, the sequel captures a few shared cultural touchstones perfectly. We’ve all accidentally hurt our kid during play, or watched with a sense of inevitable doom as they careen toward injury. Any adult who’s climbed on a sled knows the strange mix of trepidation and glee that comes with knowing your old joints probably aren’t up to the abuse you’re about to put them through. And if there’s a more common human behavior than ignoring impending doom in the hope that everything will just work out, well, I don’t know what it is. We’ve all been there. Ralphie’s struggle to become a published writer feels real, even if the financial stakes of Ralphie taking a year off from work never really do. It all just … works out. More authentic is his struggle to write his Old Man’s obituary. How do you distill a man’s life into a paragraph, particularly when his loss is so fresh and his absence such a profound hole in everyone’s life? Darren McGavin left us decades ago but still hangs like a kindly specter over the proceedings, and Peter Billingsley’s best work comes when he channels the Old Man. It feels very real and as someone who’s lost a few giants in his own life, I found myself choked up a number of times.

A Christmas Story Christmas isn’t for everyone. If you dislike the original because of its commercialism or nostalgia for Norman Rockwell’s America, your opinion isn’t likely to be changed by the sequel. It feels a bit fanfic, a cash-in on the country’s taste for reboots of late 20th-century favorites. But if there’s an Old Man or Woman-sized hole in your life, if you’ve lost someone who defined your childhood and growth as an adult, you might find some closure watching Ralphie struggle to fill his father’s shoes. And if you want to watch some adult idiots crash their sleds, well, it’s good for that too.