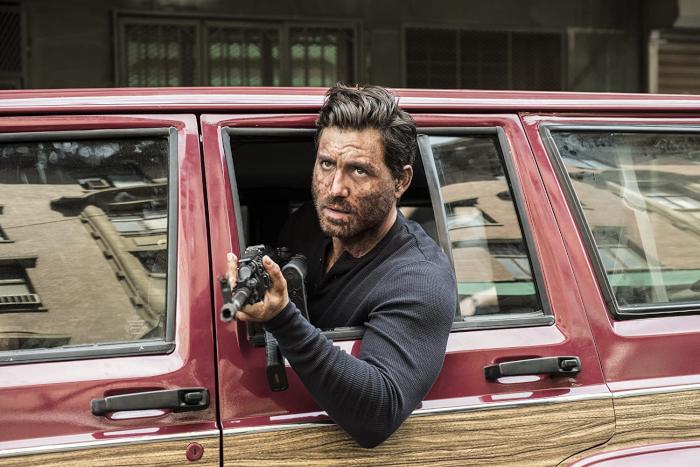 “Sometimes everything is just bullshit.” This is a line from the new Netflix original, The Last Days of American Crime, and it feels appropriate to kick off this review because this movie sucks.

Helmed by Olivier Megaton (Transporter 3, Colombiana, Taken 2), The Last Days of American Crime is set in a not-so-distant future where the American government has created a special brain-altering signal to kill off crime. Essentially, if your brain knows an action is a crime, you physically can’t do it. But before the switch is flipped, notorious bank robber Graham Bricke (Edgar Ramírez) commits to one last job, teaming up with a sketchy “sicko” (Michael Pitt), and a sultry hacker (Anna Brewster). Along the way, there will be crooked cops, scorched enemies, and terrible twists. All of it amounting to a film that sucks in five different ways.

And here they are:

Not fun trash like a weirdo Nicolas Cage movie or the Matthew McConaughey movie where he quested for a giant tuna fish named Justice. This is stupid, edgelord trash. Within the first five minutes of the film, Megaton wedges in a Saw-light torture scene, casual tableaux of bloody carnage, a massive explosion, and a random woman dancing about topless because TIDDIES! The script by Karl Gajdusek works in a bunch of characters who exist either to be gross, die horribly, or both. Its plot is essentially a meat-grinder studded with a tiresome trove of shoot outs, chase scenes, and torture sequences that chew up and spit out most of the characters. The good news is you won’t really care, because “character development” is apparently an alien concept to Gajdusek and Megaton.

2. Everyone is Terrible.
Whether anti-hero, love interest, or villain, all of the main characters of this movie are woefully one-note. They are written either as “brooding” or “bonkers” with no in-between. Once poised for stardom, Edgar Ramírez seems he’s given up the ghost, phoning in his performance of Graham Bricke with all the passion of a late-night “sup” text. He’s going for smoldering deep waters, but it comes off shallow. The only thing that kicks his bank robber badass out of sullen scowling is when a baddie takes a lit cigar to his nipple.

Anna Brewster matches Ramírez in his utter lack of energy, playing the abysmally written love interest whose main function is to get f*cked or f*cked up onscreen. With a blunt brunette bob and dead eyes, Shelby Dupree enters for a bathroom hook-up scene, then to become a pawn in a game of chess so clunky you wish Megatron would just stick to checkers. There’s supposed to be a spicy forbidden romance sparked between the Shelby and Bricke. We know that because of 2 1/2 sex scenes. However, Ramírez and Brewster have zero sexual chemistry. So these scowling f*ck-the-world f*cks feel less hot and more wet noodle.

To his credit, Michael Pitt cannot be criticized for a lack of energy. It’s almost as if he saw the wooden sneers of his co-stars and was like, ‘Soo, then I’m going to be the Kool-Aid Man.’ Playing wannabe gangstar Kevin Cash, he bursts onto the scene, scrawny, barking, and covered in bad tattoos, looking like an Instagram hipster who is really into Jared Leto’s Joker. Then, he just slathers extra over every line, every action, and every frame he’s in. I know, that might sound like campy fun. But Pitt is no Nic Cage. Whether he’s singing Biz Markie, flirting with his surly socialite sister, or frothing with sociopathic excitement, Pitt’s performance feels more flailing than fascinating or remotely fun.

Sharlto Copley is also in this movie. Which honestly, I forgot until I was double-checking name spellings on IMDB. It’s not that his role is minor, exactly. It’s more that Copley has offered wonderfully over-the-top performances in District 9, Chappie and Hardcore Henry. And the most I can say about his performance here is that he gave one.

3. The Dialogue Will Assault Your Ears With Awfulness
I have not read the graphic novel by Rick Remender and Greg Tocchini on which The Last Days of American Crime is based. Based on what I’ve seen, I never will. So, I cannot say if Gajdusek is to be blamed entirely for the dizzyingly atrocious dialogue, or if the comic creator share some of the blame. What I will say is this “mature” action-thriller frequently mistakes f-bombs with compelling quips. This leads to earnest lines like, “No. Not f*ck me. Actually, it’s f*ck you!” But that’s far from the worst of it.

Characters commit the sin of speaking clumsy exposition. So, Cash introduces audiences to his sister by hollering, “HEY SIS!” Then, in case you got bored and looked to your phone for amusement during another big shootout, this exchange exists:

A lot of the dialogue feels like it was written by a bot that had been fed C-level action movies from the ’80s. Which might explain this exchange, which exists in the meet-not-so-cute between Bricke and Shelby:

“I’ve made some bad choices.”
“We all make bad choices…I’ve got a to-do list. Step one. Get Married.”

4. Voiceover Overload
Set in a sci-fi world where government overreach can invade your brain, The Last Days of American Crime needs help establishing its concept. So before Shelby is introduced, her breathy voice steps us through the first act or so as the omniscient narrator. However, she does this with all the enthusiasm of a punk assigned to read to toddlers for community service. Beyond that, the first act of the movie is so burdened by voiceover that you may as well listen to an audiobook. Then, it abruptly vanishes, suggesting that even at two and a half hours, Gajdusek and Megaton needed some “fix it in post” finangling to make the movie make sense. If you could call it that. Which reminds me…

5. THIS MOVIE IS TWO AND A HALF HOURS LONG!
That’s what the runtime says, but I’m dubious. I’m fairly convinced at least a week has gone by between when I hit play and when the credits finally deigned to ascend.

Look, I don’t mind a long movie. I relished the Midsommar: Director’s Cut and will gladly dig in to a big, long epic film. This isn’t that. Megaton offers a bunch of action. But with dull as dirt performances and a plot that is more eye-roll-inducing that intriguing, every minute feels like a punishment.

One More Thing: Bad Timing
If you’re even remotely aware of what’s going on across the nation this week, I cannot imagine you’d want to watch a movie that treats violence like a smorgasbord we can’t get enough of. There are the woefully standard barrages of bullets in the aforementioned shootouts. Plus, there’s plenty of police brutality, from freedom-seeking Americans being shot in the back to the film’s female lead being pummelled to a pulp by Copley’s cop. It’s meant to be the same escapist crime-centered fun American audiences have reveled for generations, through cowboys, gangsters, super cops, and superheroes. But this week, the thrill is gone.

The Last Days of American Crime is now on Netflix. You’ve been warned.

← So Much Grief | Review: 'You Don't Nomi' Dares Audiences To Reconsider 'Showgirls' →