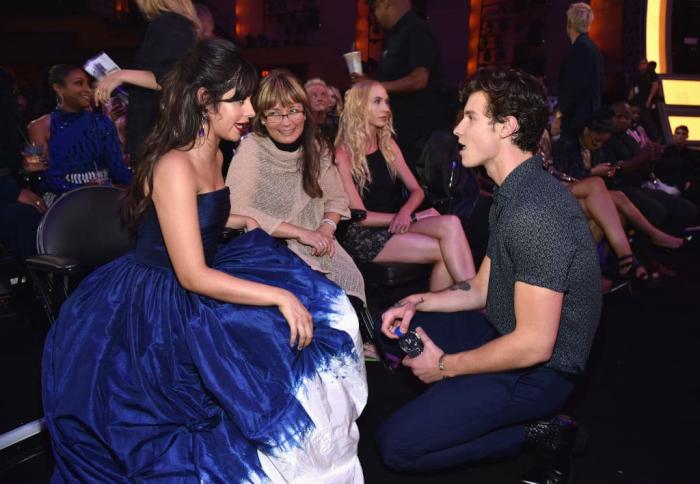 Shawn Mendes and Camila Cabello are both very young and very famous. If you’re older than 25 then their rise to stratospheric heights of fame in such a short amount of time may prove a little confusing. The singers are both celebrities created in the social media age, tailor-made for an era of endless visibility and devotion. He’s 20, she’s 22. He rose to fame through posting 7-second snippets of himself singing cover songs on Vine. She was a reality-TV star who left the X-Factor formed girl-band Fifth Harmony to go solo. They’re apparently dating, but aside from their fans, nobody believes it to be true.

The pair were first spotted getting cozy last month, after several years of friendship and collaborations. The couple was hot and heavy very quickly, kissing passionately in pools, showing off major public displays of affection, and holding hands. So far, so typical celeb romance. Sure, the pair had just released a duet together, titled ‘Señorita’, but there’s no reason to be cynical, surely? And yet even some of the pair’s most ardent fans didn’t seem to buy it. Things seemed too practiced, too neatly choreographed. Those photographs were all of excellent quality, seemingly far too posed to be the work of a regular paparazzi on their tail. Cosmopolitan started asking if the relationship was a PR stunt, and they weren’t the only ones. Cabello and Mendes have their defenders — their respective fandoms are highly devoted and ready to strike at any moment — but that hasn’t quashed the cynicism surrounding this romance.

Gossip watchers and fandoms are more pessimistic than ever. We’re hyper-aware of the machinations of celebrity, far more so than fans of decades past, and we’re programmed to be skeptical of everything in the always-online fake news age. Once upon a time, it would have been unthinkable to posit the idea that a celeb romance had been put together for publicity purposes, even when it was one of Hollywood’s bigger open secrets. Nowadays, it’s a go-to response for every famous pairing that leaves us the slightest bit cold. A lot of this can delve into intensely conspiratorial ramblings, as evidenced by tin-hat RPF shippers for people like Robert Pattinson and Kristen Stewart. If you’re committed to a delusion, you’ll use any tool at your disposal, including the very real practice of PR romances. Of course, the fact that they’re real doesn’t make them anywhere near as common as many people think they are. Typically, we only pay attention when the PR is bad. Think of how much we laughed at the attention-grabbing awkwardness of the Summer of Hiddleswift, or that strange two week period where Kaley Cuoco got hot and heavy with Henry Cavill.

There is a certain air of practice and knowing presentation in those paparazzi photos of Cabello and Mendes. They kiss dramatically in the ocean like they’re posing for an album cover. Cabello smiles broadly and gazes adoringly at her taller partner. They’re so photogenic and working those angles, clearly with photographers who have at the very least been tipped off to prime locations to get the best shots. Add a rosy filter and this pair could be models for a YA romance novel. There’s an element of required performativity to celebrity, but fans tend to react negatively when it’s too performed. Getting that tricky balance of ‘authenticity’ is crucial, but that’s tough when the meaning of realness changes as frequently as the tides.

It’s easier than ever for a celebrity to be visible to the world, be it through social media or a clever playing of the age-old fame game, a world whose rules have changed surprisingly little over the decades. Celebrities of the younger generation are expected to be seen all the time and be accessible on a level that seems utterly bonkers to the old-school set. If you’re a former Vine star or someone who became famous via a reality TV show, you and your team probably don’t think twice about playing up the intensely public aspect of a burgeoning romance, regardless of whether or not it seems authentic. It almost doesn’t matter if it’s real or not because hey, people are looking and they’re talking about it.

But we would be ignoring the much darker and more prevalent problem if we were to focus exclusively on the cog-turning aspects of celebrity marketing in regards to Mendes and Cabello. To put it bluntly, a big reason a lot of people don’t buy this romance is that they think Shawn Mendes is gay.

For many years — essentially from the beginning of his career — every move Mendes makes has been dissected by the internet as ‘proof’ of his sexuality. There are entire Twitter threads and forums dedicated to putting his gestures, speech, and clothing under a microscope. This is not unique to Mendes. Look at some of the biggest male stars on the planet and you’ll find a similar kind of treatment. It’s been a part of the Tom Cruise mythos as much as Scientology and teeth. There are some people still convinced George Clooney is gay. What makes it so intensely unique to Mendes is that this is a narrative born and bred on the internet, where he himself became a star. And remember: He’s only 20 years old.

In a 2018 cover story for Rolling Stone, Mendes got candid about how this kind of scrutiny and rumourmongering affected his mental health:

There are memes that pair photos of Mendes with jokes about being closeted and videos that scrutinize his gestures. On some parts of the Internet, outing him has become a spectator sport. Mendes often finds himself watching his own interviews, analyzing his voice and his body language. He’ll see an anonymous stranger comment on the way he crossed his legs once and try not to do it again. He pulls out his phone to show me his Twitter account — his name is the only recent search. “In the back of my heart, I feel like I need to go be seen with someone — like a girl — in public, to prove to people that I’m not gay,” he says. “Even though in my heart I know that it’s not a bad thing. There’s still a piece of me that thinks that. And I hate that side of me.” Last Christmas, he was reading YouTube comments about his sexuality when he decided he’d had enough. “I thought, ‘You fucking guys are so lucky I’m not actually gay and terrified of coming out,’ ” he recalls now. “That’s something that kills people. That’s how sensitive it is. Do you like the songs? Do you like me? Who cares if I’m gay?”

And he’s right. This is something that kills people, and this is a kind of paranoia-inducing level of attention that makes it extremely difficult for LGBTQ+ people to live their true lives, be they famous or otherwise. If Mendes is gay, then who gains from the public humiliation of trying to out him when he doesn’t feel ready? What is to be achieved by forcing a guy who isn’t even old enough to drink in America to feel this sort of pressure? A lot of LGBTQ+ celebrities talk of the responsibility they feel to be a face for the movement and a role model for younger generations who need that representation, but it’s not something they are obliged to embrace, nor is it helpful to force that weight onto the shoulders of someone who may be going through their own sh*t. Imagine being a world-famous teenager, having your perceived effeminate nature be roundly mocked, and then have those same trolls claim you’re responsible for the welfare of closeted kids everywhere. The casual homophobia perpetuated by this kind of conspiratorial gawking helps nobody and it certainly doesn’t make Mendes’s life any easier, regardless of his sexuality. Turning every move a 20-year-old man makes into ‘proof’ of his closeted nature only seeks to demonize behavior deemed too ‘feminine’ for a man to embody, and that screws over a hell of a lot of people.

As with all celebrity couplings, there is much to glean from the perfected presentation of a relationship, from how it romanticizes the individuals in question to the ideas it suggests about gender, sexuality, fandom, and so on. In that aspect, one can’t help but be somewhat fascinated by how Mendes and Cabello’s relationship feels so out of step with what we hope for an expect from well-maintained PR. It also reminds us of how cynicism can only take us so far, and, amid our need to maintain a healthy degree of skepticism about what we are sold by celebrity, how that impacts the people at the center of the drama.