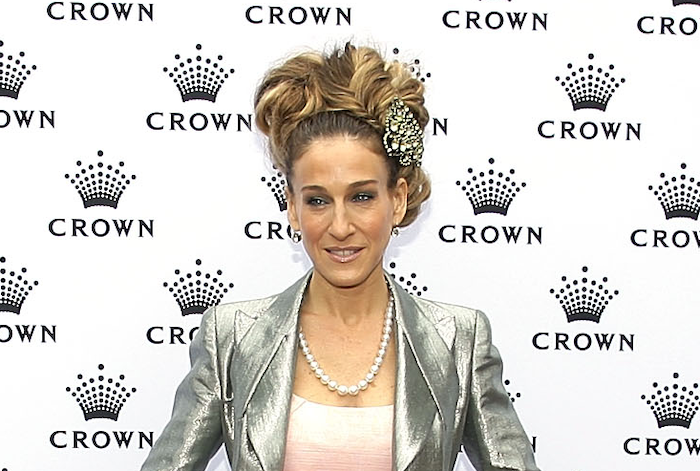 Ugh. In water is wet news, Sarah Jessica Parker was a guest on NPR’s Fresh Air and revealed that she was sexually harassed on set, by a “very big movie star.” Double Ugh.

(It’s most likely not Tom Hanks. They’ve never been in a movie together. That’s just the face I made when I heard this unsurprising news, and also, when people are talking loudly and distracting me.)

While not revealing the identity of the co-star (although the clues are there if you’re willing to put on your detective hat) she went on to describe the situation.

“The nature of the person who I felt was really the instigator, this was a grown man; a very big movie star,” Parker said. “He was baked, meaning his personality, it was cooked. He was a formed person and that wasn’t going to change.”

Parker said that her agent immediately took action “without hesitation,” threatening to remove her from the project if the behavior didn’t change. “He said to them, ‘If this continues, I have sent her a ticket, a one-way ticket out of this city’ — where I was shooting — ‘and she will not be returning,’ ” Parker recalled.

Surprisingly, the behavior changed, and even more surprisingly, Parker still has a career after speaking up.

“It was fascinating. Within hours, everything had changed,” Parker said. “It wasn’t perfectly pleasant but I didn’t have to be coy anymore and I didn’t have to dread a potential conversation. I didn’t have to listen to jokes about me or my figure or what people thought they could talk me into doing. All these men and, that just stopped.”

“I felt certainly better and safer,” she added. “That I could continue what I wanted to do.”

Unsurprisingly, it was on of “countless” experiences onset that she would describe, now, as harassment.

“It really wasn’t, I would say, until about six or eight months ago that I started recognizing countless experiences of men behaving poorly, inappropriately, and all the ways that I had made it possible to keep coming to work or to remain on set, or to simply — as I’ve described it — just push it down, push it away, find a little space for it and move on,” she said.
“I always found a spot and really just didn’t allow it to consume me,” she said. “I don’t know why, to be honest. I don’t know why I either wasn’t courageous or more destroyed by some of the things that I was privy to, that I was on the receiving end of.”

That last part really hits home, for me at least. I feel like it wasn’t until very recently it occurred to me that I could completely reject the entire narrative horrible men create in their actions towards women, especially in the workplace. It says a lot about how girls were raised that, at least for me, someone who thinks of herself as a feminist first and foremost, I thought I had to play from within the rules of the game. To accept that some men will be horrible in the workplace, and to be vigilant, rather than expect these men to treat us with respect. To survive that, you turn inward, which makes yourself smaller. You allow the people treating you as less than to take up as much space as possible, and as a result, the system perpetuates on, and on, and on. I’m very grateful that the narrative is shifting, that these men are getting called out, and that younger generations of women are growing up knowing the system sucks and they don’t have to accept any of it. #MeToo has a lot to do with that.

People has a great write of the interview, or you can go straight to the source and hear it from Parker herself.

Since we’re not going to end this article on a bummer note about awful men harassing Parker, here’s her amazing dance scene from Girls Just Want Have Fun, because never forget Sarah Jessica Parker has been in the game for a long time, and deserves a career as spectacular as this movie (Jonathan Silverman’s creepy role notwithstanding.)

← Director Todd Philips Says 'Joker' Isn't Based On The Joker Comics | What Does Angelina Jolie and Jennifer Aniston Have to Do with the USA Women's World Cup Team? →