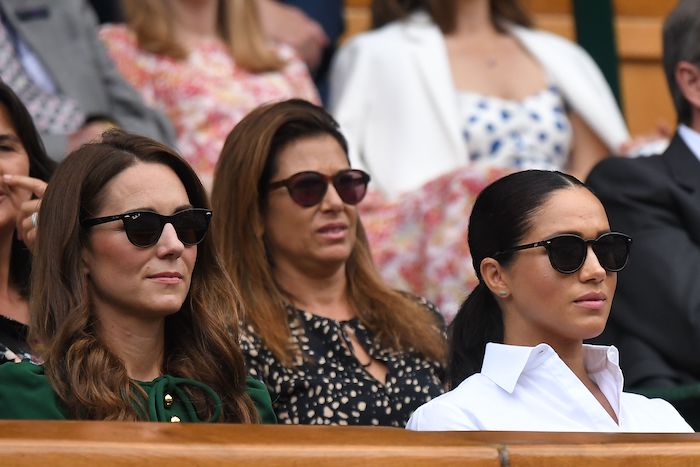 What if Meghan Markle and Kate Middleton Are Playing the Long Con?

If there’s anything I love better than a good grift, it’s a long con. I admire the patience it takes to pull off something like that, and I’m starting to suspect that maybe, just maybe, Meghan Markle and Kate Middleton could be engaging in one.

Case in point, this ridiculous “Exclusive” from People.com today, titled: Meghan Markle Is ‘Very Aware That Kate Will Be Queen’ — But They Are ‘Pitted Against Each Other’

“Meghan is very aware that Kate will be Queen; their roles are very clear,” the source says. However, there is also little common ground. “Meghan doesn’t fit the mold, while Kate was groomed for this,” says the source, who adds that Meghan was a “fully formed person” when she joined the royal family, while Kate was still in college when she met fellow student William.

“What’s challenging is when they are pitted against each other,” says the source. “That’s been challenging to both of them. Meghan has her life, Kate has hers.”

Oh, were you afraid I’d leave out the misogyny? Not to worry, friend, it’s there:

“It’s very much still about taking care of him and putting family first,” a friend says of Meghan, Harry and their 6-month-old son Archie. Meanwhile, Kate and William are busy parenting Prince George, 6, Princess Charlotte, 4, and 1 1⁄2-year-old Prince Louis. But even there the difference in styles is evident.

Ah, yes, two grown women’s entire lives revolve around caring for their children and that’s it. Love that narrative being reinforced, yet again. Like neither ever take a moment for themselves and play Pokémon Go? Highly unlikely.

On the surface, this really does look like the same old, same old, Kate and Meghan are just too different to ever get along, blah blah blah, BS.

So it got me thinking—what if that’s exactly what Kate and Meghan want us to think right now? What if, wait for it—this is a long con?!

First, you’re going to say, “Long con for what, Kate-Hudson-who-did-not-have-a-starring-role-in-Almost-Famous?!” Isn’t it obvious? Long con for everything.

The crown jewels, the land, the titles, the sugar, you name it! Ok, probably not the sugar, that was a Simpson’s episode.

The rest, though, most definitely.

What if Kate Middleton knew going into the Royal Family that it was going to be non-stop f*ckery? So she decided to form an alliance with whomever Harry married, to get back at everyone and everything. Enter Meghan Markle, who married for love and clearly didn’t anticipate all the other bulls*it and a healthy dose of racism and misogyny thrown in for good measure. So the two ladies hatched a plan to make the media think that they weren’t thick as thieves, so they could be thick as thieves in private and plot the next phase of the long con—

I don’t actually know what the next phase of the long con is, to be honest. Maybe it’s that, maybe it’s steal the jewels at the Met Gala, with Cate Blanchett’s help. Hell, maybe the long con is to distract the world with their so-called differences while they actually invent the precursor to a technological revolution like Hedy Lamarr did. I don’t know! Try as I might, I am in neither Kate nor Meghan’s confidence, but I do think I’d probably get along with both, because they live in old, haunted places and that is a direct correlation to essentially all of my interests.

I’m personally sick of these BS articles coming out talking about these two women’s perceived differences. I’m sure it must put weird pressure and strain on their relationship, and I do think Meghan, in particular, is a smart cookie. So why not explore the other option, where they’re in control of their narrative and this is all a smokescreen for…

Stranger things have happened (like the whole institution of the monarchy, which is really weird if you ever stop to think about it) and frankly I’d rather live in the world where Meghan Markle and Kate Middleton are putting together a long-con heist than a world where women get pitted against each other to generate clicks and sell magazines.

So, ladies? If you’re looking for a third to help, who can’t really keep a secret but who is super enthusiastic about stealing things and smashing the patriarchy, well, I think you already have my answer, here: