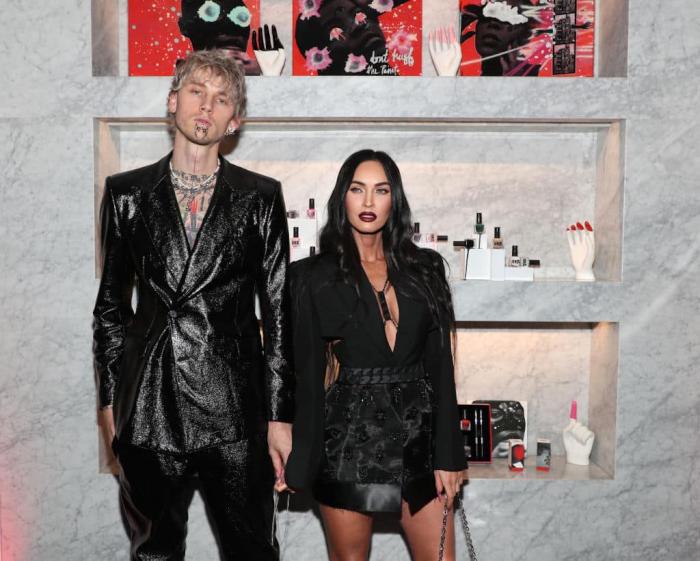 Megan Fox and Machine Gun Kelly just got engaged after dating for about 18 months. The couple have had an absolute blast playing up their ‘rockstar and hot chick’ romance for the media. They’re living it up on the red carpet with lavish pseudo-camp goth fashion. They gave a wild yet oddly sweet interview to GQ complete with the now-legendary pick-up line ‘I am weed.’ Their social media love-ins are a blend of vampire fan-fiction, Pam and Tommy cosplay, and genuine sincerity. Honestly, I’m a fan.

As I wrote before, I love that this is a celebrity couple who are evidently performing for the masses, playing up their untouchable celebrity weirdness and not even trying to pretend that ‘relatable’ is a concept in their lives. Not every power couple can be oh-so-normal. I think this is why we’re all so excited for Bennifer Redux: two very famous people who are extremely good at being celebrities is entertaining to watch. Granted, MGK and Fox are a little greener at this but they’re not unaware of the image they’re projecting. That’s why I find it kind of hilarious that everything they say and do is being taken as gospel.

When sharing the video of their engagement, Fox wrote on Instagram, ‘and then we drank each other’s blood.’ Very Angelina and Billy Bob, right? It’s also probably just a joke. Hell, maybe they did but given the show they’re putting on for the masses, I read that line as Fox ribbing herself and her new fiance for playing up to the stereotypes everyone has about them.

The same goes for the engagement ring story. MGK told Vogue during a Dolce & Gabbana show that the admittedly stunning diamond and emerald ring that he designed for her has thorns in the magnetic bands, ‘so if she tries to take it off, it hurts… Love is pain!’

This inspired a lot of ire, and I get why. If the ring is actually designed to hurt when she removes it then that’s a d**k move as well as a major misunderstanding of jewelry. Honey, Megan needs to wash her hands now and then. You can’t make her keep the ring on when she’s doing dishes or going through airport security or eating chicken wings. Maybe she’s super into the masochism of it. I don’t wish to downplay any of the serious concerns that people would have about such a concept. I totally get if you see this relationship and find red flags everywhere. But it is still kind of fascinating to me how every word they say is taken as gospel when so much of it feels like blatant trolling. This guy painted his tongue black for a red carpet appearance! Megan Fox famously has a bone-dry and oft-underestimated comedic streak! I think it’s okay for us to just enjoy the show. They’re making their own myth for a reason: It gets people to pay attention.


← Alec Baldwin is Being Sued for $25 Million by the Family of a Fallen Soldier. Is This a Case? | The Best of Twitter's 'Kramer, What's Going On In There?' Meme →