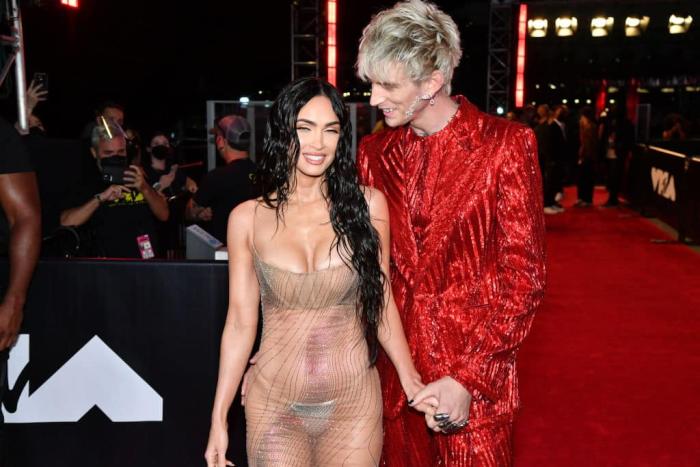 'I Am Weed': That Megan Fox and Machine Gun Kelly Interview Has Inspired a Lot of Jokes

Hot celeb couple du jour Megan Fox and Machine Gun Kelly sat down with Molly Lambert for a cover story for the British edition of GQ. The actor and rapper-turned-pop-punk rocker detailed their whirlwind courtship, intense romance, and the overwhelming happiness they’ve found with one another. I’ve complained a lot about how celebrity profiles are getting more homogeneous and PR-controlled these days. This was not one of those cases. After all, it’s a story that opens with Fox and MGK tattooing one another.

The piece is, indeed, a lot. The pair are clearly wholly besotted with one another and keen to show it off to the world. Both have had a ball in recent months playing up their baby Pam and Tommy cosplay on red carpets, reveling in the ’90s rocker-esque aesthetic and performativity of celebrity. Personally, I’ve really enjoyed watching a couple like this reject so-called relatability in favor of something far more chaotic. I even wrote about it a few months ago! They’re not ‘just like everyone else’ and that’s why it works. But that can mean that they’re an easy pair to be put off by. They’re ‘too much,’ so to speak. I do think they’re way more in on their own joke than some give them credit for, and that thoughtfulness is evident in the GQ piece. But then there are moments like this, where they describe their first meeting:

”I don’t remember your face… And I definitely would have remembered his face,’ she continues. ‘I just remember this tall, blond, ghostly creature and I looked up and I was like, “You smell like weed.” He looked down at me and he was like, “I am weed.” Then, I swear to God, he disappeared like a ninja in a smoke bomb.”

We all read the ‘I am weed’ bit in the Christian Bale Batman voice, right?

The internet, of course, had a ball with this.

i literally cannot stop thinking about mgk saying “I am weed” and then megan fox thinking he’s the hottest, most mysterious guy ever

Megan Fox and MGK are important because small town couples who met in rehab, have a Nightmare Before Christmas-themed wedding and name their firstborn Vengeance need someone to look up to

I thought this was Megan Fox and MGK https://t.co/AzHHnKmFx9

that Megan fox and mgk shit really givin me these vibes pic.twitter.com/1l0ZjhZuva

im just trying to visualize the situation thats happening between megan fox and mgk based on how megan explain it https://t.co/eM5hc9e1Jd pic.twitter.com/8Ttc8YPIzK

“You smell like weed.” He looked down at me and he was like, “I am weed” pic.twitter.com/IW52zYi8sd

Shout out to every scraggly-haired dude in your local area who is going to try out the ‘I am weed’ line before having a drink thrown in their face.

I honestly can’t get mad at this pair. They’re patently ridiculous but obviously know it. Fox talks very candidly in the piece about body dysmorphia issues, experiences with anxiety and misogyny in Hollywood, and feeling at peace with herself. They genuinely seem to like one another. Sure, we all tend to get our unwashed rockstar phase out of our lives early, but I’m all for seeing some old-school celebrity shenanigans like this. Think Angelina in the Billy Bob days or Marianne Faithful with the fur rug. Bring on more famous people weirdness.

But guys, ‘I am weed’ will never work on that hot woman you’re into, I promise you. Unless she’s a weed-killer saleswoman and has a dark side.