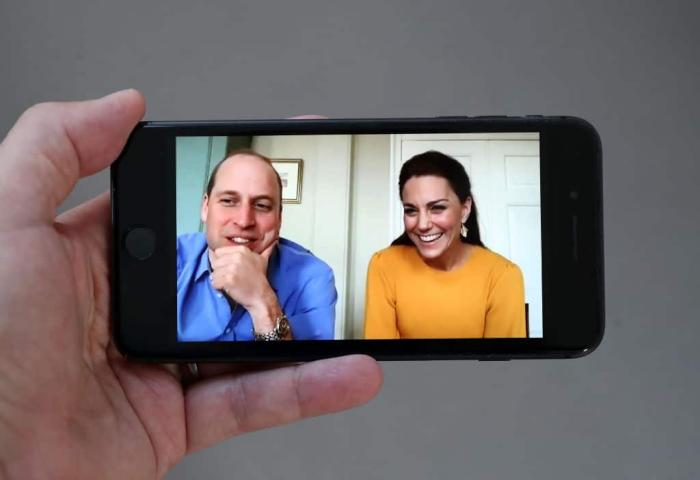 Now that Prince Harry and Meghan Markle have told the Windsors that they’re over their bullsh*t and are off preparing to become the next George and Amal, the actual heir to the throne and his wife can swoop right in and prove that they’re just as beloved and interesting as those pesky Sussexes. Prince William and Kate Middleton have been ‘hard at work,’ as evidenced by this image of the Duchess taking calls at her desk. Note the Penguin classics set that she was definitely not purchased just that morning.

Spotted: a beautiful display of Clothbound Classics on Kate Middleton’s desk while she works from home. https://t.co/TJGOpu9mDj pic.twitter.com/F9yljk4nic

William has been keeping in touch with the various charities he supports as the COVID-19 pandemic lockdown continues, and during one video call to the Moorlands Community Charity in Goole, East Yorkshire, he decided to offer some rousing words of support:

Yup, nothing says community spirit like thousands of people dying, entire industries shutting down, and an inept government whose slow response to this months-long pandemic has led to only further deaths and chaos. I feel heartened by this, Will! It’s great being too afraid to leave your house and crying because you miss your family.

Shock horror, Twitter didn’t exactly warm to his attempt at the President’s speech against the aliens in Independence Day.

Dear Prince William, Mr Windsor, Duke of Cambridge, Master of the dull thud inside your head. Please do shut the fuck up. You really (truly) are not helping. We are not at our best in a wave of viral death. We are at our best when we are free from poverty, inequality and illness. https://t.co/tBw4dDzGYo

No Prince William, Britain is 'at its best' when we're an open, tolerant, accepting, liberated, internationalist society, not when we're all locked down at home by a deadly disease while being crippled in leadership by incompetent, exceptionalist, populist, nationalist stupidity. https://t.co/OQSDHX5vUV

What a stupid, intellectually challenged, brain numbing sh*t Prince William is. It's easy to think the UK is 'best in a crisis' from the privileged position of being protected from every crisis imaginable. Time to vacate Buck House & hand it over to NHS. #COVIDIOTS #royalnitwits

Me cracking a joke at the pub.

i think prince william and i have different definitions of 'best'. i, for one, do not believe i'm at my best during an aggressive viral death plague

that being said, i might think differently if i was shacked up in kensington palace. there's a big whole foods like two mins away https://t.co/KdxKlg2ez0

I’m not listening to any young man with a hairline like Prince William… pic.twitter.com/1QTtIUCMHE

Prince William I'd keep my mouth shut,
If I was walking in your shoes,
A virus you said "had been hyped"
A tragedy we didn't choose!
And now we're deemed" best in a crisis "
Many no longer here to say,
I think your words are disrespectful,
Detached from reality in every way!!!


Also hey, remember when you said this, Bill!?

Are you referring to this Prince William?pic.twitter.com/ideGIzAON5


And you just know he’s going to be celebrated for this jolly-ho Keep Calm and Carry On nonsense by the same talking-heads who would have eviscerated Meghan if she’d said something to the same effect.

Honestly, Will, it costs nothing to stay silent. Well, actually, it costs the British taxpayers, but we’d prefer that to all this crap.

← The Political Media Is Goading the President into Firing Anthony Fauci | 'Hook's Dante Basco Shares Secrets From The Set, Memories of Robin Williams →