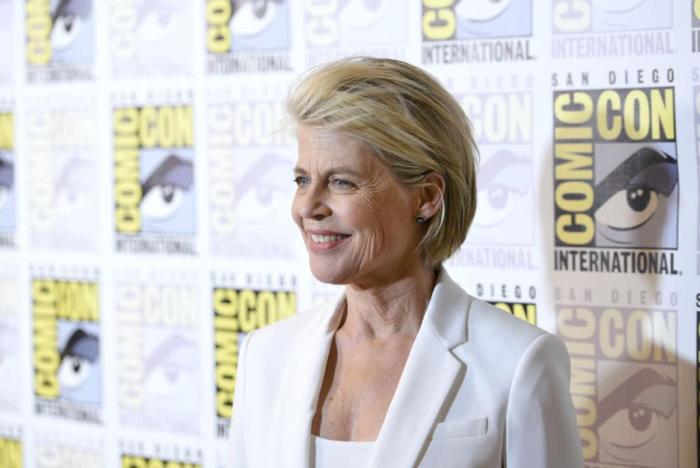 Sarah Connor is one of the true icons of blockbuster cinema: The meek damsel-in-distress who morphs into a hardened and embittered warrior against the impending apocalypse, a headstrong woman whose fierce devotion to protecting her son has left behind intense emotional scars. Other actresses have played Connor in various parts of this franchise, but only one woman was ever truly Sarah: Linda Hamilton. Now, she has returned to the role that made her a megastar in Terminator: Dark Fate, 28 years after she last reprised the role. Here, Sarah is more hardened than ever having lost her son John and been left alone to deal with canceling the impending apocalypse. Her life has not been an easy one and it is evident in everything she does, from the skillful but cold way she wields weapons to the sardonic quips she makes to the lines etched on her face. This is an old woman going up against the world and it is glorious. There are times when I watch glossy Hollywood blockbusters and forget what wrinkles on a woman’s face look like because such things are seen as unacceptable to the masses. Here, we get it and it’s a genuine joy. This is the Sarah Connor we needed and deserved, one that Linda Hamilton delivers in the way only she can.

It’s not that older women are absent from action films in 2019 but they’re still limited in their options. They can be side-characters who never get involved with the gun shootings or car chases, giving orders or playing the no-fun bureaucrat who looks amazing but is never positioned as worth rooting for. Sometimes, when they are part of the fighting, they’re not as involved as the men, even those of comparable ages. Overall, what binds a lot of these women is that they are consistently characterized as ‘not looking their age.’ Apparently, this is the greatest compliment one can give a woman, but all it does is highlight how the basic and wholly natural act of aging has become weaponized against an entire gender.

The most beloved lie of the entertainment industry is that women magically stop aging at around 35 and everyone happily pushes the line that it’s merely the result of good genes, hearty exercise and eating all your kale. We’ve collectively agreed it’s gauche to discuss the realities of cosmetic surgery and the excruciatingly detailed beauty regimes required to keep up appearances. Men are not immune to such pressures but they are more likely to be described as having faces that possess ‘character’ as they age, whereas women become ‘tired’, ‘past their sell-by date’, and ‘unf*ckable.’ The message is clear: You can be older, you can celebrate that, and a marketing company can praise the production for being so progressive in its hiring of you, but you can’t look 50 or act it. Women who look older than 35 don’t get to join in on the boys’ fun, even if all the guys are past middle-age and have faces craggier than a mountain.

Linda Hamilton is 63 years old and she looks great. She looks her age and she looks amazing. Not in spite of her age, not ‘good for 63’, and certainly not ‘except for the wrinkles.’ She has the face of a woman who has lived a fruitful life, stayed strong, and refused the offers of an occasional touch-up. When she walks on-screen in Terminator: Dark Fate, she cuts a striking figure, imposing but enthralling in her disheartening uniqueness. Aging isn’t detrimental to Sarah’s drive, her struggle, her past or her future. This war has taken its toll on her. How could it not? How could it not show on her face and body after everything she has been through? To show her as a polished grand dame, as many films would demand of their actresses, would be a cruel lie for both Sarah Connor and Hamilton herself. In a film full of time-traveling killer robots, the image of an elderly Sarah getting on with the business of surviving, using the skills she’s developed over the decades to do so, may be its most truthful and hopeful aspect.

Age is still something we are societally taught to be afraid of. Age means decay and death and irrelevance, the perpetual cycle downwards as you stop being cool or the center of every conversation and are replaced by the new generation. It means incapability and being dismissed as dead weight for the active heroes. Youth equals beauty and vitality and strength and that never goes out of fashion, even if the enhanced version created through CGI, make-up, surgery, and prosthetics proves too distracting or unnecessary overall. We’re so often denied the creative richness of aging since Hollywood thinks the vast majority of women over 35 should just disappear. Think of the amazing moment in Mad Max: Fury Road when the Vuvalini are introduced. Think of how astounding it was to see this tribe of elderly women taking on the world with all the strength and tenacity the patriarchal monsters like Immortan Joe believe them to be incapable of possessing.

Linda Hamilton brings to Sarah Connor a history and cultural weight that no other actress could pull off. Part of that is rooted in the multiple times she’s played the character and how audiences instantly associate her with the part but a lot of it is because of who she is now in 2019. She is a woman in her 60s who uses her face and body to convey the kind of trauma and nihilism Sarah is smothered by in a way a younger actress or older woman forced to look younger never could. Her presence in Terminator: Dark Fate is a reminder of what we have so often been denied by misogyny and ageism but also of the endless creative possibilities that open up when women are given space to simply be once the crow’s feet are allowed to form.