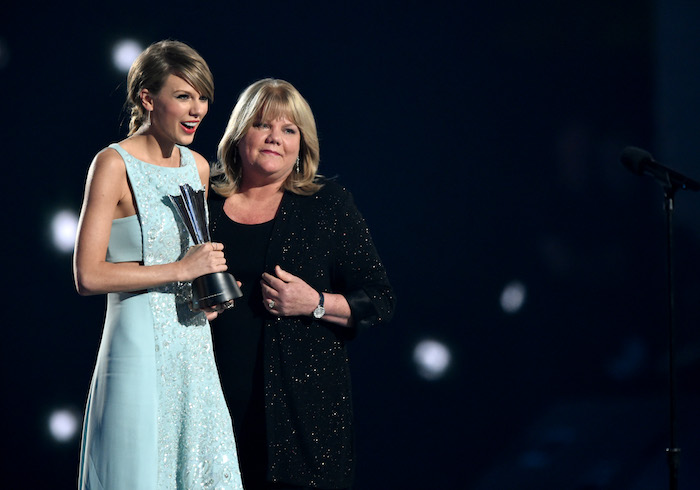 Taylor Swift Reveals Her Mom, Andrea, Has A Brain Tumor

Moms are important. If you’re lucky you have a good relationship with yours, or someone who fulfills that role in your life. There’s not a lot of “off-limits” topics in the world, but one that must be met with universal sensitivity is the subject of someone’s mom and friends? I wish I was here today with better news about Taylor Swift’s.

Unfortunately her mom Andrea has been diagnosed with a brain tumor, in addition to cancer. Per People:

In a new interview with Variety ahead of her upcoming documentary Miss Americana, the musician, 30, revealed that her mother had recently been diagnosed with a brain tumor while undergoing treatment for cancer. Andrea’s cancer had returned for the second time while the documentary was filming, Swift revealed last March.

There is something about bad things happening to someone else’s mom that reduces me to about 8-years-old, wanting to go sit in my own mom’s lap, because the world can be scary and my heart goes out to Taylor and her family right now. The details of the situation aren’t great.

“She was going through chemo, and that’s a hard enough thing for a person to go through,” the singer said.

“While she was going through treatment, they found a brain tumor,” Swift continued. “And the symptoms of what a person goes through when they have a brain tumor is nothing like what we’ve ever been through with her cancer before. So it’s just been a really hard time for us as a family.”

Last August, Swift released a song on her album about her mother’s illness, “Soon You’ll Get Better” which may make you cry if you listen to it, right now.

Like I said, Moms are important and I hope that Taylor Swift’s gets better soon. If you want to break your heart a little, Miss Americana will be released January 31st on Netflix. It appears that it will cover at least some portion of Andrea Swift’s diagnosis, so keep your tissues handy.

← The Trailer for AMC's 'Dispatches From Elsewhere' is a Big Mystery | Reddit Asks: What's The Creepiest Glitch In The Matrix Or Unexplainable Event You've Experienced? →