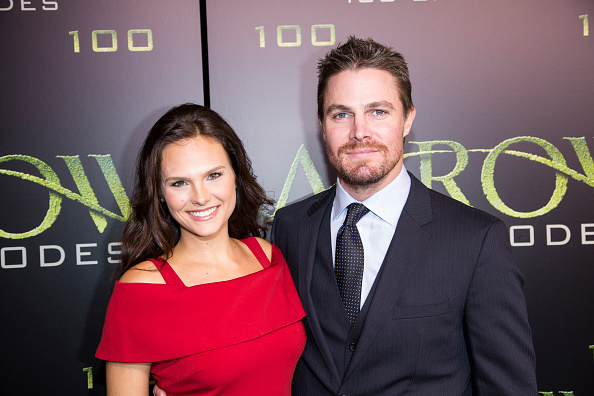 Stephen Amell Regrets 'Being an Asshole in Public'

I watched a few seasons of Arrow, and I absolutely adore the new Starz series, Heels, but I’d never formed much of an opinion about the lead in both series, Stephen Amell. Usually, this is a good thing. If a celebrity can go through life being known for only their product, that usually works to their advantage.

That changed, however, a few months ago when Stephen Amell was kicked off an Austin flight for what was described (by Amell himself) as an “argument” with his wife. A drunken argument with one’s wife on a plane evokes certain opinions about a person and none of them are good.

Recently, Stephen Amell appeared on Michael Rosenbaum’s podcast, Inside of You, and at the very top of the show, Amell volunteered to explain exactly what happened on that flight.

The reason Amell wanted to talk about it, however, is because he used the wrong word to describe what happened between Amell and his wife. “I was pissed off about something else that had nothing to do with my wife, [Cassandra Jean], and I picked a fight. I picked a fight because I wanted to be loud. And upset. And it was a ‘fight’ not an ‘argument.’ In order to have an argument, two people have to be engaged. My wife said one thing the entire time, which was, ‘If you don’t lower your voice, they’re going to ask you to get off the plane.’ That’s the only thing she said the entire time.”

“I can’t even remember what I was upset about,” Amell continued, “which was indicative of two things: A) I can’t handle my liquor, and I had too many drinks, and B) it clearly wasn’t important. I was just upset and wanted to be upset.”

Sure enough, after his wife told him to keep it down, Amell said a guy came by and said, “‘You have to keep your voice down, please’ … so Cas was obviously 100 percent right here. I was being too loud. I was probably dropping a few f-bombs. And this is not an excuse — I’m not here to make an excuse — but I was also wearing noise-canceling headphones. But I don’t even want to smile while I’m telling this story because frankly, I’m deeply ashamed about it.”

“I was quiet for about 10 minutes,” Amell added, “and the guy came back. I had clearly made someone uncomfortable, and someone said something, and they made the decision that I had to get off the plane, so I got off the plane.”

However, when Amel found out it was going to be on TMZ, “the one thing I said about it on the Internet is that I referred to it as an ‘argument’ between my wife and I. It wasn’t an argument. It was 100 percent my fault. I feel like I went the better part of 10 years without being an asshole in public, and I was an asshole in public.”

Amell also added that his wife was “super pissed” at him over the incident, and even more angry that he used the word “argument” as opposed to “pick a fight.”

“The whole thing sucks, and it’s really really shameful. I realized two things: If people are going to recognize you, don’t drink in public. But more importantly, don’t drink in a public place if you can’t handle your shit.” Amell also acknowledged that he has had too much to drink from time to time in his life, “but don’t do it on a plane, you fucking loser.”

“This is a weird experience that we all live in where people just give you what you want. And occasionally that leads to you not setting appropriate boundaries in your own life,” Amell concluded, which is clearly true for all of us, whether we are celebrities or not.

Source: Inside of You