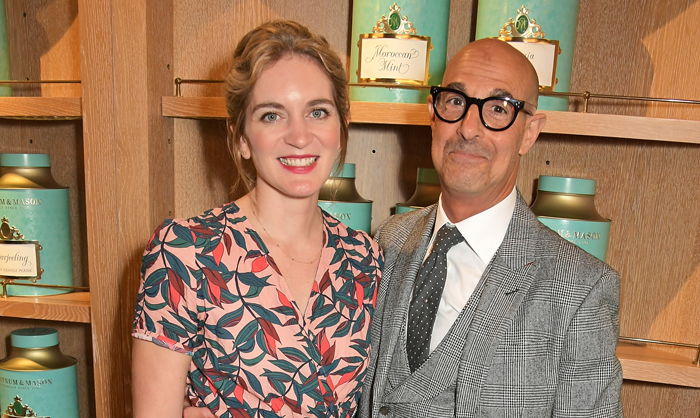 We have discussed before how Stanely Tucci is a snack, and he knows it. He knows what he’s doing when he rolls up those dress shirt sleeves to expose those hairy, muscled forearms. He knows how his sensual love for food and wine makes us swoon. He knows exactly what that smoky voice of mischief and pure sex does to us. Then he goes and makes an Instagram post where he combines all three.

Sure, he says this is a cocktail-making tutorial, but we know it’s another Tucci Thirst Trap.

In the above video, Tucci makes a Negroni, offering advice on the classic cocktail’s construction while his wife Felicity Blunt (yes, Emily Blunt’s sister) plays cameraperson. Notice how she taunts us too, flashing her wedding band and engagement ring at the end.

We get it, Felicity! All we get is savoring every onscreen moment of the Tucc. The way his beefy arms flex while expertly rattling the cocktail shaker. That slight smile as he does so, knowing he has us wrapped around his strong fingers. He says, “You can do it on the rocks.” And we think, “I’d do YOU on the rocks, Tucci!” But you, you, Felicity, you get to. Our respect and envy of you is profound, Mrs. Tucci.

Naturally, Tucci’s cocktail vid made a big splash, causing his name to trend on Twitter.

May this video of Stanley Tucci doing a cocktail masterclass be a blessing upon your twitter feed. pic.twitter.com/62R1TjsAqA

Sir, Stanley Tucci could serve me wine and tell me it's butter and I would gladly obey his instruction. https://t.co/8Nlerhfzz4

Nothing — and I mean nothing — has soothed me in the last six weeks quite like the way Stanley Tucci making a “Negroni” on Instagram has. 🍸 pic.twitter.com/LzlbE3iJWL

I want Stanley Tucci to manhandle me the way he slams down his cocktail ingredients pic.twitter.com/W9Fg3YCQOV

My sexual preference is Stanley Tucci's unbuttoned Henley shirt in Easy A. pic.twitter.com/UYjnPCsk1c

Why is Stanley Tucci just such a massive sex symbol within both the straight and gay universe? In this essay I plan to - pic.twitter.com/UjnKHivbrD

We’ll never be as cool as Stanley Tucci and it’s about time we just accept it. pic.twitter.com/D1beeQDBe7

sorry but I never knew the word "Florida" could be hot till it came out of Stanley Tucci's mouth https://t.co/Ot0YDjYDXv

Imagine you’re in quarantine with Stanley Tucci and he’s making you a Negroni while being the last man in the world to wear real pants AND a belt AND a watch all at the SAME TIME. The sophistication. This adult. pic.twitter.com/LFVxWsdrTE

Me, after frantically trying to discover why he is trending: pic.twitter.com/5Y4TKJjUAO

I think it's once again time to share these photos from Stanley Tucci's cookbook pic.twitter.com/2Ex9XCNMTn

Stanley Tucci could get literally anything he wanted. Any. Thing. https://t.co/QuQwmqTY7C