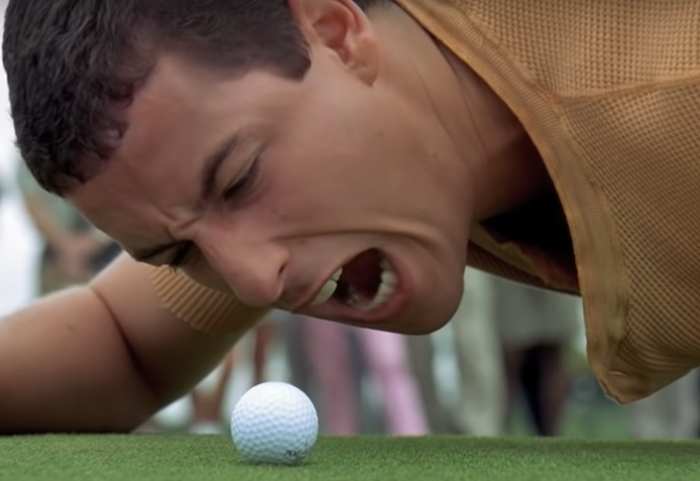 Some of You Haven’t Seen ‘Happy Gilmore ‘and it Shows

I want you to cast your mind back to a simpler time—the mid-’90s. (Yes, we are going to put on rose-colored glasses and forget everything bad that happened during that period, OK?! We’re gonna do it, and we’re gonna like it, dammit.) John Cusack was making his comeback (never forget that the early ’90s, Grifters aside, were not kind to him), No Doubt was becoming a thing (that band was great) and Adam Sandler was still funny.

Yes, I said it, Adam Sandler was funny. In fact, he was funny up until just after The Wedding Singer, which was his last good movie. Now, you may want to stump for Uncut Gems and that is your right, but if that’s the case I would like to remind you that I am Kate Hudson, most likely the number one fan of Con Air. I have the opposite taste of Film Twitter, so your argument will not hold water with me. ¯\_(ツ)_/¯

I’m getting off track—see people on Twitter were arguing about who had the better sports movies, Will Ferrell or Adam Sandler. Since I love dumb things, I’m pretty sure I’ve seen all of the sports movies both Sandler and Ferrell have made, and while I do enjoy Talladega Nights, there is simply no comparison because Happy Gilmore is in the mix, and the only movie that tops Happy Gilmore is Billy Madison, which alas, is not a sports movie but does have this scene, which is by far my favorite out of the entire Sandler and/or Ferrell oeuvre:

I will be honest, I suspect for a portion of people who inadvertently stumble onto anything I write for this site, this is their reaction to any given post, which fills me with delight. Once again, I’m getting off track. BEWARE THE MOLE PEOPLE!

The real point of this is that Happy Gilmore is hilarious and basically any movie you compare to it, including Uncut Gems, will fall short because Happy Gilmore has a killer alligator and that makes it win by default. Also, Bob Barker beats someone up! Come on now, that’s hilarious!

Finally, I know some people think it’s gross, but I enjoy Subway sandwiches, and there’s a lot of product placement for those subs, so that’s an added bonus, too, if you’re into mid-’90s product placement, which apparently I am, today.

So in closing, eat fresh, Happy Gilmore is better than most movies, and I will never see Uncut Gems because it doesn’t have an alligator that eats people’s hands. Happy Saturday!