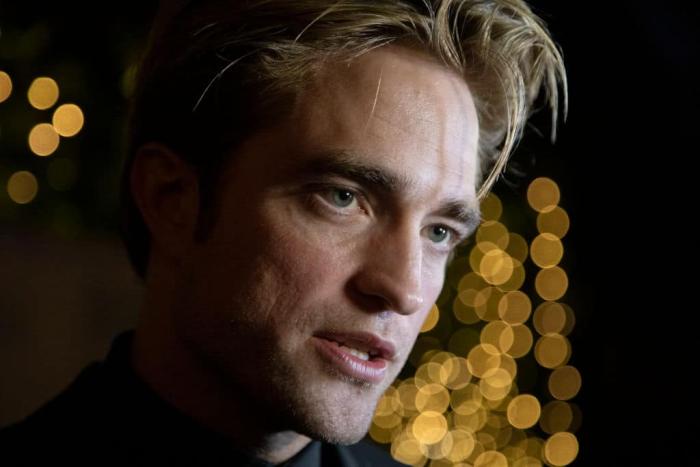 It’s now something of a lockdown cliche that one uses this period of quarantine to work on their culinary skills. If you haven’t made banana bread or a sourdough starter during this pandemic then do you really exist? I myself recreated Reynolds Woodcock’s breakfast from Phantom Thread, but not the hallucinogenic mushroom omelet yet. I’m not quite at that stage of frenzy. Give me time. For the stars, this is a time to fake humility and pretend we’re all in this together. Well, unless you’re Robert Pattinson, then it’s the ideal moment to just go totally bonkers.

RPattz, the future Batman and perpetual sparkle king, is one of our great 21st century cinematic weirdos, as evidenced by his mermaid f**king in The Lighthouse, that French accent choice for The King, and that time he chewed through Kristen Stewart’s uterus to retrieve their parasitic mutant baby. That totally happened, true story. Now, Pattinson is in lockdown and GQ spent a lot of Facetime sessions trying to figure out how he’s doing.

What do you do when you’re wasting time inside and waiting until you can once again clean up the streets of Gotham? You decide to become a fancy pasta bitch. Hey, we’ve all been there. We’ve all seen those glamorous Italian cookbooks where making your own penne seems so comforting and simple. Who doesn’t like pasta? Pattinson loves the stuff, and he’s even considered going full Shark Tank and becoming a pasta entrepreneur. GQ details his plans for culinary greatness:

‘Last year, he says, he had a business idea. What if, he said to himself, “pasta really had the same kind of fast-food credentials as burgers and pizzas? I was trying to figure out how to capitalize in this area of the market, and I was trying to think: How do you make a pasta which you can hold in your hand?”

He says he went so far as to design a prototype that involved the use of a panini press, and then, he says, he went even further, setting up a meeting with Los Angeles restaurant royalty Lele Massimini, the cofounder of Sugarfish and proprietor of the Santa Monica pasta restaurant Uovo. “And I told him my business plan,” Pattinson recalls, “and his facial expression didn’t even change afterwards. Let alone acknowledge what my plan was. There was absolutely no sign of anything from him, literally. And so it kind of put me off a little bit.” (Massimini says: “It’s 100 percent true, everything he told you.”)’

Poor Rob, having his dreams crushed by the man. Curse those fiends at the heads of Big Pasta, keeping the small guys in their place. Never fear, for Pattinson is not so easily dismayed. Now that he has GQ hanging on his every word, he decided to show the intrepid journalist — via Facetime because he’s a social-distancing genius — how he would make what he calls Piccolini Cuscino: Little Pillow.

One (1) giant, filthy, dust-covered box of cornflakes. (“I went to the shop, and they didn’t sell breadcrumbs. I’m like, ‘Oh, fuck it! I’m just getting cornflakes. That’s basically the same shit.’ ”)

One (1) incredibly large novelty lighter. (“I always liked the idea of doing a little flambé, like the brand name, with kind of burnt ends at the top.”)

He puts on latex gloves. He pulls out some sugar and some aluminum foil and makes a bed, a kind of hollowed-out sphere, with the foil. He holds up a box of penne pasta that he had in the house. “All right,” Pattinson says. “So obviously, first things first, you gotta microwave the pasta.”

I hope you’re all taking notes on this. It gets weirder.

In the meantime, he takes the foil and he begins dumping sugar on top of it. “I found after a lot of experimentation that you really need to congeal everything in an enormous amount of sugar and cheese.” So after the sugar, he opens his first package of cheese and begins layering slice after slice onto the sugar-foil. Then more sugar: “It really needs a sugar crust.”

Then he realizes that he’s forgotten the outer layer, which is supposed to be breadcrumbs but today will be crushed-up cornflakes, and so he lifts the pile of cheese and sugar and crumbles some cornflakes onto the aluminum foil before placing the sugar-cheese back on top of it. Then he adds sauce, which is red. The microwave dings, and Pattinson promptly burns himself on the bowl of pasta. He sighs, heavily, looking at it. “No idea if it’s cooked or not.” He dumps the pasta in anyway. At this point, his spirits have visibly begun to flag. “I mean, there’s absolutely no chance this is gonna work. Absolutely none.”

Yum? I mean, credit to him for trying something, maybe? I’m mostly thinking about the state of his microwave and the skin on his hands right now. I suggest you read the whole piece for the sheer madness of it all, but I have to highlight this bit before we wrap things up:

“Can you actually put foil in an oven?”

I say yes, you can, but what you absolutely cannot do is put foil in a microwave. And he says cool, cool, and then he goes looking for his oven, which he’s never used before, and this is a nice house, so there are multiple options, and the one he settles on, well: It looks like another microwave to me. He assures me it is not.

He puts the aluminum sphere, the little pillow, into what he thinks is an oven and I think is a microwave.

Proudly he is walking back toward the counter that his phone is on when, behind him, a lightning bolt erupts from the oven/microwave, and Pattinson ducks like someone outside has opened fire. He’s giggling and crouching as the oven throws off stray flickers of light and sound.

“The fucking electricity… oh, my God,” he says, still on the floor. And then, with a loud, final bang, the oven/microwave goes dark.

Remember when we tried to turn this guy into a traditional handsome leading man and it turned out he was utterly barmy? Remember when we all thought that the uterus chewing C-section was as weird as he was going to get? We were not prepared. None of us were ready. I can’t wait for the scene in The Batman where he blows us the Joker’s lair with a microwave and some Bat Cheese Spray.

← Accusing a Cable News Host of Murder Is Not the Worst Thing Trump Has Done in the Last 24 Hours | 'Hamilton' Is Coming To Disney+, But Will It Be Censored? →