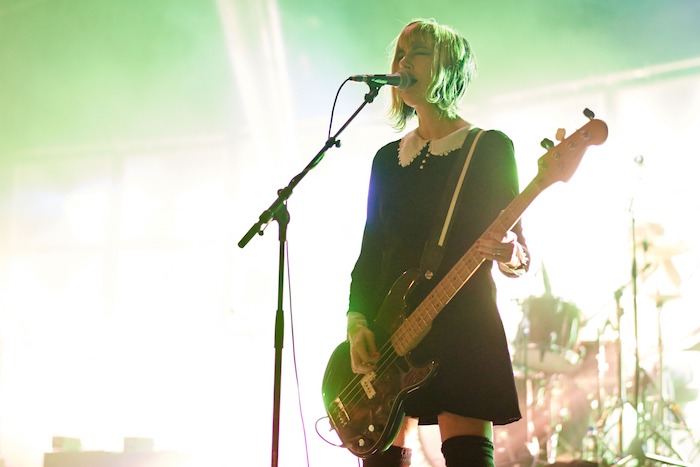 Rest in Peace: Kim Shattuck of the Muffs Was the Coolest

My ’90s heart broke yesterday when it was announced that Kim Shattuck of the Muffs, Pandoras, Pixies, and the Coolies died of ALS, peacefully in her sleep.

Growing up in Alaska in the ’90s, I had to actively search out bands to fall in love with. In some ways, it made it a lot easier to find good music to listen to, but perhaps more importantly, the music that I did find (and love) was so hard-won that to this day, it holds a special place in my heart. I kept a constantly updated, meticulously handwritten list of bands and albums I wanted to track down to see what they sounded like because back then, you couldn’t instantly summon anything you wanted to listen to. You had to save up to mail order an indie record or pray the radio DJ was in a good mood and would play your song if they had the album on hand. So like many people who lived outside of a major population center, discovering music was a multi-step process that usually began with reading a review or seeing an album cover in a magazine and then imagining what they could possibly sound like. The Muffs were no exception. I was enamored of the cover for the Muffs’ 1995 album, Blonder and Blonder, which is in the embed, below.

As you can see, Kim Shattuck was the f*cking coolest, and her sound was distinctly her own. I was lucky enough to see the Muffs about 4 years ago in LA, and it was everything I could have hoped for and more.

I don’t have an older sister, which was something I desperately wanted growing up (my own little sister might beg to differ, here) so I looked towards my lady role models to fill that position—and Kim Shattuck was that, and so much more to me. I brought the cover of Blonder and Blonder to my first “grown-up” hair appointment at 12 (almost 13, thankyouverymuch) requesting that the lady dye my own brown-almost-black hair to have chunky blonde highlights like Kim rocked, and I most definitely wore the babydoll dresses (with collars) with chunky heels that Kim was known for then, and today.

She may not have been a household name for many, but for me, it didn’t get more A-list than Kim Shattuck. Part of the reason I was able to convince my mom to take me to see Romy and Michele’s High School Reunion when I was, in theory, too young to see it was that at the time, was that it was rumored that Kim had a small role in the film. Turns out she did, but it was cut for time. That same year, the entire band was in Father’s Day, which coincided with the release of their newest album at the time Happy Birthday to Me, and of course, I saw that in the theater, too.

Then, there was the music. If you’re not super familiar with the Muffs, your best bet at recognition is either through their cover of “Kids in America” which was feature in the opening of Clueless:

Or, if you are of a particular age, this song, which was heavily used in a Fruitopia commercial in the mid-90s. (Go ask your grandparents what Fruitopia was, kids. That question just makes me feel old and sad today.)

I was (and am) a hardcore fan of the Muffs, and there’s basically no song of theirs I don’t love dearly, although this one is one of my particular favorites, and has been for the past 25+ year:”

While not a Muffs cover of “Don’t Go Breaking My Heart” with the Mr. T Experience is also exceptional:

While Kim was in other bands, the Muffs was how I discovered her, and as a result, they are the closest to my heart, and the one I listen to most.

No matter what song Kim was on, she had a way of making it sound uniquely her own. Everything about Kim Shattuck was like that. While I didn’t know her personally, this one stings a lot because even though I’m older, and my world has expanded greatly from the insular bubble in Alaska, there’s still a part of me that’s 12 years old, in my bedroom, rocking out to Blonder and Blonder, and dreaming of what the world will be like when I’m finally in it. That world’s a little less bright today because one of the coolest people has left us because of a s*tty disease that took her too soon. Goodbye, Kim, and thank you for the music, and everything else.

← Nickelback Giveth, and Nickelback Taketh Away: The Latest on the Impeachment of President Donald Trump | Robert De Niro and James Franco Sued for Gender Discrimination and Sexual Misconduct →