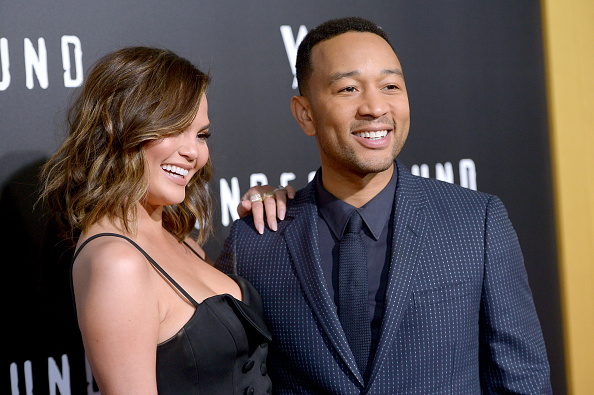 Last week, Donald Trump spent the entire week belaboring how right he was that Alabama was in the path of Hurricane Dorian (it was not), going so far as forcing the National Weather Service to stand down before #Hurricanegate finally ended with this, tweeted around midnight Saturday night:

Somehow, it was only the second most embarrassing thing he did last week, because he also invited the Taliban to Camp David for peace negotiations two days before the 9/11 anniversary, only to call off those peace negotiations because — surprise! — a goddamn terrorist group known to chant “Death to America” did not acquiesce to the demands of *checks notes* the American President.

In case you missed it, Trump banned Muslim women and children refugees but invited the Taliban to Camp David.

It’s a new week, however, and President Sh*t for Brains has gotten it off to a solid start by starting a feud with … Chrissy Teigen? During an MSNBC special hosted by Lester Holt last night, John Legend spoke about the need for criminal reform, and the President — who has swamp-ass between his ears — took issue because he wasn’t getting enough credit, calling out Lester Holt, John Legend, and … why not? Chrissy Teigen.

When all of the people pushing so hard for Criminal Justice Reform were unable to come even close to getting it done, they came to me as a group and asked for my help. I got it done with a group of Senators & others who would never have gone for it. Obama couldn’t come close….

….A man named @VanJones68, and many others, were profusely grateful (at that time!). I SIGNED IT INTO LAW, no one else did, & Republicans deserve much credit. But now that it is passed, people that had virtually nothing to do with it are taking the praise. Guys like boring…..

….musician @johnlegend, and his filthy mouthed wife, are talking now about how great it is - but I didn’t see them around when we needed help getting it passed. “Anchor”@LesterHoltNBC doesn’t even bring up the subject of President Trump or the Republicans when talking about….

…..the importance or passage of Criminal Justice Reform. They only talk about the minor players, or people that had nothing to do with it…And the people that so desperately sought my help when everyone else had failed, all they talk about now is Impeaching President Trump!

John Legend, naturally, took it all in stride.

Imagine being president of a whole country and spending your Sunday night hate-watching MSNBC hoping somebody—ANYBODY—will praise you. Melania, please praise this man. He needs you.

Your country needs you, Melania

And then Legend went in for the kill:

Ouch. That one burnt my nose hairs. Don’t bring a three-celled amoeba with a thumb and a smartphone to a gunfight, folks. Teigen — the filthy-mouthed wife who the President blocked a couple of years ago — also weighed in, delivering filthy-mouthed poetry.

lol what a pussy ass bitch. tagged everyone but me. an honor, mister president.

Luna, remember the night before your first day of school? When mommy was making your sign and the pussy ass bitch president had his 9th meltdown of the day pic.twitter.com/ZFZHJYrDPG

the absolute best part of his tweet is I literally didn't speak in the special, nor was I mentioned. I'm cackling at the pointless addition of me because he cannot not be a bitch pic.twitter.com/9ZkV7bh4FA

Did #PresidentPussyAssBitch trend within hours? Mmmm. I don’t know, actually, because I don’t think Twitter would allow it to trend, although at the moment, #TeamChrissy, Chrissy Teigen, #filthymouthedwife, and John Legend are all trending.

“Though #PresidentP****A**B**** was too profane to feature on Twitter’s trending list, tracking data by social media firm Keyhole showed the hashtag was seen by far more US users than the hashtag in top place.” https://t.co/tGCbAHaSdi

no guys no please do not make this trend, for it is my fight with #PresidentPussyAssBitch, not yours!!!!!! https://t.co/hSJ0UxjbaO

I got a feeling #FilthyMouthedWife is gonna be trending by morning, probably be on tshirts before the day's out. Trump may not be prosecutable for crimes, but holy hell can he be dragged for going after Chrissy Teigen.

September 2019. The month where the so called ‘president’ of the USA attacks John Legend, Debra Messing and his own weather forecasters more aggressively than the actual Taliban…

It’s time to invoke the 25th Amendment when Trump is crazy enough to think he’ll win a Twitter war against Chrissy Teigen.


← Like A Lot Of Us, Kristen Stewart Is Also Excited To See Robert Pattinson As Batman | Review: 'The Lost Okoroshi' Blends Afrofuturism With Mythology, Comedy, and a Lot of Dancing →