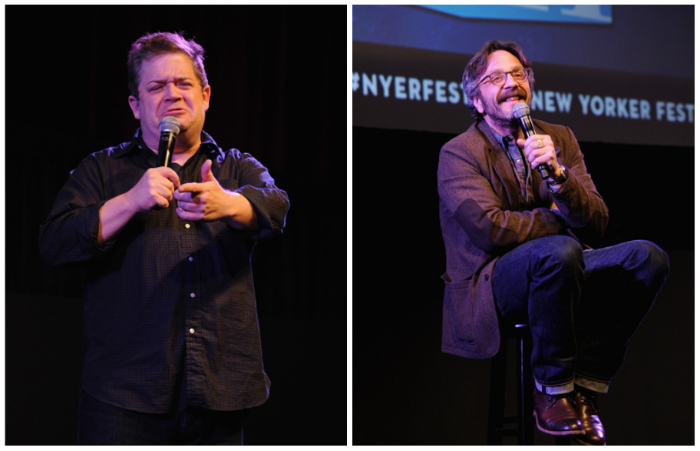 Patton Oswalt was on this week’s WTF with Marc Maron podcast, and if there’s one episode of WTF in recent memory I suggest you listen to, it’s this one. The two are clearly good friends. Maron was a big influence on Oswalt’s career (which Oswalt readily and repeatedly acknowledges), and they can talk comedy and comedians together like no one’s business (there is a great section on Bill Hicks). The two also have something else in common: They both lost loved ones in a sudden, traumatic fashion, a topic they spent 20 minutes bonding over.

But they also talked about Dave Chappelle. The entry point into the conversation was not just about comedians but anyone that gets too much power, too much fame, and too much money, and how that can be corruptible.

Maron: Even with, like, Chapelle and all this language stuff. It’s sort of like, I don’t understand why? I don’t understand. I know there’s a bigger arching belief system around it that isn’t necessarily right-wing.

Maron: This idea that some of it is insulated in the idea of free speech, and I think that’s sort of bullshit.

Oswalt: That whole thing with me and him at the beginning of the year was really instructive.

Maron: Oh, you got the picture?

Oswalt: Well, I was in Seattle, and he was like, ‘Hey, I’m at the arena. Come on over.’ Again, we’ve known each other since we were f**king teenagers. So, yeah, I’ll go. And I did a set, and I got a picture with him. I hadn’t seen him in so long. And then, so at first, and this is again, this is how tribal and weird shit is. First, suddenly all of these right-wing, alt-right guys are like, ‘Patton is on our side. F**k yeah!” And then I was like, [Oh no]. And then pro-trans people were doing stuff and I was trying to delete all the negative stuff, but I was deleting the pro-trans people first and then getting [to the alt-right] and it got so ugly.

And then I wrote a thing, like, he’s still my friend. I still love him. We disagree on trans rights violently and that’s just how it’s going to be. And then it became, ‘The PC police got to Patton.’ I’m like, ‘This is not a f**king sporting event.’ You’re talking in terms of pro-wrestling. ‘Bobby Heenan got to Andre the Giant and brainwashed him.’

Maron: This is the nerd thing. Now, the ebb and flow of culture is being dictated by the guys who were playing video games.

Oswalt: The doubling down is weird.

Maron: But I guess the thing that’s upsetting is that I think a lot of times, I don’t think they’re totally aware of how they are being used. At some point, you may be doing what you want to do, but there are forces that are bigger than you that are going to co-opt your message. At some point, you can’t say, ‘Hey, man, that’s not my business,’ because it kind of is your business.

Oswalt: And sometimes the co-opting can be very, very profitable, and you can get swept up in that. But it is puzzling. Chappelle is one of the smartest guys I’ve ever met.

Maron: It’s just weird. It’s just weird that he has this commitment to this one thing. And like, you know, he has his brilliant bits. I like the guy. But it’s weird to me.


← Why Does Jordan Klepper Do this To Himself? | Trailer Watch: The Good, The Food, And the Lena Dunham →