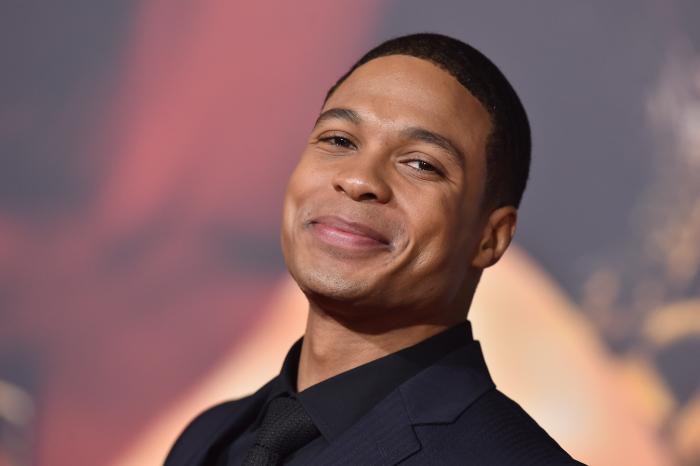 Pajiba 10 For Your Consideration: (My Friend) Ray Fisher

Eight years ago, I was at a Game Of Thrones season two watch party in Harlem, fresh off of a painful breakup. I felt emotionally drained and incredibly uninspired. Toward the end of the night, someone at that party, who knew what I was going through, put their hand on my shoulder, looked me dead in the eyes, and said, “Remember why you’re here.” It was exactly what I needed to hear and was said with calm and strong reassurance. The person who said it was Ray Fisher.

I’ve known Ray for over a decade at this point. He is a good friend and confidant. Hell, he was a groomsman at my wedding. I was there as he went from being a Broadway bartender to playing real-life superhero Muhammad Ali Off-Broadway to playing larger-than-life superhero Victor Stone AKA Cyborg on the big screen. It’s been a meteoric rise to say the least and one that couldn’t be happening to a nicer person. I know that because I know Ray, and I’m here to tell you: you know him too. The guy you see shouting “BORGLIFE” from the rafters, playing video games on Twitch, and fighting for social justice, that’s who Ray is.

I met Ray while we were bartending for Broadway theaters in NYC. At the time, the company we were working for was attempting to take advantage of some of its employees. In response, Ray spearheaded an effort to unionize that group of workers. He contacted the union (UFCW Local 360), organized meetings, collected signatures, and offered support to the other employees who feared speaking up lest it cost them their jobs.

After receiving pushback from the company, Ray and the union took their cause all the way to the National Labor Relations Board. By the end of it all, Ray had lost his job, but he successfully helped to unionize the workers, some of whom are still with the company.

Ray fights for what he believes in. When he first became involved with the play Fetch Clay, Make Man by Will Power, it was not as Muhammad Ali, but Ray believed in the show. He believed in Ali. He studied and trained and worked himself to the bone, turning down other work in the process, just for a chance to play the man on stage. Ray Fisher was eventually given that chance and the rest, as they say, is history.

Ray’s career took off. He was the talk of the town and taking meetings most could only ever dream of. All the while, he was spending his nights playing increasingly complicated (and sometimes excruciatingly long) board games with me and several other close friends. Despite the dreamlike opportunities he was presented with, he never stopped being the guy who loved hanging out with his friends and analyzing every move he made to ensure it was the right one (even if that made said board games even more excruciatingly long).

When he was cast as Cyborg, the excitement he emitted was palpable. Ray is a fan at heart, just like the rest of us. When I snagged free tickets to see the IMAX trailer for Batman v Superman: Dawn of Justice in New York City, Ray came with me, clad in sunglasses, a hat, and a tightly wrapped scarf as to avoid suspicion.

He and I stood patiently in the cold for about an hour, excitedly waiting for a glimpse of the film. To put it mildly, we were not disappointed. And when the film was released in full, we weren’t disappointed then either.

I’ll let you in on a little secret though. I kind of wish that at least one person had spotted Ray as we waited on that long line. There’s something special about seeing him interact with someone who knows him from “the pictures.” He is kind and grateful. He loves his fans with the grounded nature of someone whose fantastic journey has only made him a stronger version of what he already was.

It doesn’t stop at his fans either. I was lucky enough to visit Ray on set while he was shooting a certain movie. That film will remain nameless as I signed an NDA and am no longer sure of the terms. What I will say is that Ray treated everyone on that set with grace and kindness. Whether they were a PA or their name was… Men Matfleck…

One of the most heartwarming examples of Ray’s generous spirit involves a young boy named Kayden Kinckle. Kayden is a double amputee who was transformed, via a photoshoot, to resemble Ray as Cyborg. When Ray hosted a premiere of Justice League for friends and family in his home state of New Jersey, he invited Kayden to attend and then met him in person. You can (and should) watch the video below.

Ray treats people the way he does because he knows it’s the right thing to do. That’s how he lives his life. He talks the talk and walks the walk, an attitude best exemplified by a mantra you may have seen him use quite a bit recently: Accountability > Entertainment. On July 1st, 2020, Ray tweeted the following:

Joss Wheadon’s on-set treatment of the cast and crew of Justice League was gross, abusive, unprofessional, and completely unacceptable.

He was enabled, in many ways, by Geoff Johns and Jon Berg.

You could say this opened the proverbial floodgates. At a time when we, as a nation, were left shaken by not only a pandemic but public examples of gross social injustice, Ray raised his voice. Not just for himself, but for a slew of others who had experienced similar issues with Joss Whedon, Geoff Johns, Jon Berg, Walter Hamada, and Toby Emmerich. And he kept raising his voice.

Eventually, an internal investigation by WarnerMedia was conducted and concluded this past Friday. We have yet to see the full fallout of the investigation, but according to WarnerMedia, “remedial action” has been taken.” I’d like to focus on a different statement, though, one they gave to Ray when informing him that the investigation had concluded. “WarnerMedia appreciates you having the courage to come forward and assist the company with creating an inclusive and equitable work environment for its employees and partners.”

The investigation was not easy. At one point, Warner Brothers publicly claimed that Ray had “declined to speak to the investigator,” which was proven to be untrue. He kept speaking out, he kept encouraging more people to speak up and speak out. And instead of taking sole credit for WarnerMedia’s adulation, he shared it with all involved.

- And this statement (which truly belongs to ALL who participated in the investigation):

“WarnerMedia appreciates you having the courage to come forward and assist the company with creating an inclusive and equitable work environment for it’s employees and partners.”

Over 80 people were interviewed for @WarnerMedia’s Justice League investigation.

A fair, thorough, and protected process for witnesses was the first (and most important) step.

Ensuring that action is taken is the next.

Thank you to all who lent their voice!🙏🏽

Ray Fisher’s fight is not over. I honestly don’t think it ever will be. As I look back on that fateful night eight years ago, I think about how different he was from the man he is today. He’s older, wiser, and more determined than ever. When he fights for Accountability > Entertainment, I see something different yet very much the same. He’s putting his hand on everyone’s shoulder, looking us dead in the eyes and saying, “Remember why you’re here.”

← Reddit Asks the Question: 'What's Your Favourite Poverty Meal That You Still Eat Regardless Of Your Financial Situation?' | 4 Issues Holiday Films Should Rethink →