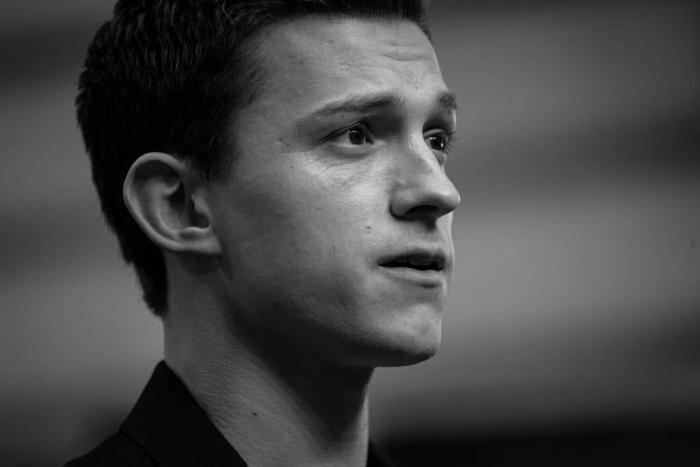 No, Spider-Man's Tom Holland Is Not Saying 'Karen' Is A Slur

There are a lot of prominent white men in the world with the same name, so you can’t blame us all for getting confused now and then. Have you seen how many tall actors named Chris there are out there?! It also turns out that there are a veritable crap-ton of Tom Hollands. There’s a late Australian footballer Tom Holland (as well as a late English footballer one, and remember, two totally different kinds of football), a visual artist Tom Holland, a Kansas state senator Tom Holland, and even a film director Tom Holland who directed the original Fright Night.

Of course, the Tom Holland you’re probably the most familiar with is Spidey himself, our adorable Rihanna-dancing gem of bouncy talent and surprisingly ripped abs. He’s keeping busy during this here lockdown with Instagram challenges and casual flirting with Jake Gyllenhaal. He’s not, thankfully, claiming that ‘Karen’ is a slur on Twitter. That’s another Tom Holland: The historian one.

If you’re British then you’ve probably seen or heard this Holland on T.V. and radio. He’s also a writer of fiction and non-fiction whose works are prominently displayed on many a Waterstones shelf. He recently shared an article on Twitter which supported the bullsh*t notion that the ‘Karen’ joke is an evil misogynistic slur against white women, and since we’re all too exhausted from lockdown and generally expect the worst from celebrities as it is, we saw that blue tick and wondered what happened to our poor Peter Parker.

It's amazing how many woke ways there are to dump on women. https://t.co/37IUqvDfBh

We’ve been through this before.

I honestly had no idea that so many people felt so strongly about their right to use a word that other people plainly find upsetting.

For an academic, this guy isn’t very good at understanding the historical appropriation of suffering and abuse by the powerful as a means to further oppress marginalized citizens while diminishing the bigotry they face on a daily basis. What we are currently seeing with this ‘Karen is a slur’ nonsense is a deliberate attempt to realign our basic notions of language in order to reinforce a false dichotomy that insists that centuries-old slurs are identical in harm to literal jokes and memes. This is rooted in white supremacy, make no mistake.

Said article he’s linking to, by the way, is written by Sarah Ditum, a notorious transphobe who believes that trans women should not have access to ‘women-only’ services. Her entire career these days seems built on attacking trans women while crying that ‘cis’ and ‘TERF’ are unavoidable slurs against her, so it’s no surprise that she’s taken to being faux-furious about ‘Karen’. As I said before, the Venn diagram of cross-over between transphobes and white women who think ‘Karen’ is as bad as the N word is basically a full circle.

Julie Bindel, another noted transphobe who thinks that bisexual and queer women are ‘boringly straight women claiming to be lesbians’, joined the bandwagon too.

Then there was Hadley Freeman, who decided that the Trans Day of Visibility was the perfect moment to publish a transphobic screed masquerading as feminism on The Guardian, jumped in too.

It’s also quite telling how little grief you got for this tweet. For which I’m v glad, of course! But if @sarahditum or @bindelj or I had tweeted it, our mentions would have been wall to wall “OK Karen”

Oh, you don’t like being called Karen? How about being called race-baiting transphobes whose endless think-pieces have poisoned the well of British culture and discourse for decades to come and made the world an actively worse place to be in? Is that more suitable?

Please enjoy this cleansing image of Best Tom Holland with his doggie.

Talk about a flex #mydogscoolerthanyours