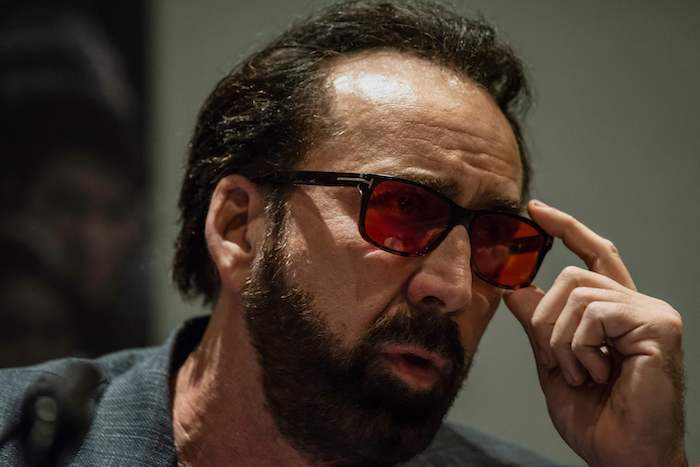 Nicolas Cage Is Moving Past Dinosaur Bones to Search for the Holy Grail. It’s About Time

The headline you just clicked on seems less like news and more like the inevitable path we’ve been waiting for Nicolas Cage to finally take after dancing around it for so long. For those of you who didn’t bother to read the headline, I’ll reiterate it for you now: Nicolas Cage is moving past dinosaur bones to search for what has eluded man and Indiana Jones for so long: The holy grail.

He revealed this in a profile in The New York Times Magazine, where he compared himself to Monk (I’m assuming he meant the titular character played to perfection by Tony Shaloub. OK. That’s a lie, I’ve never seen an episode of Monk, but he won a lot of awards, so someone must have liked it, right?) and in the same breath, told the interviewer he was going to Transylvania for a film festival. I f*cking love Nicolas Cage.

He explained that he’d been busy preparing for a trip to TIFF. Not the Toronto International Film Festival, he clarified — the one in Transylvania. “I can’t pretend to know what people think or want to think about me,” he said. “I’m not Stravinsky, I’m not Van Gogh, I’m not Monk, but these people were not understood, and my favorite artists were misunderstood.”

I mean, sure, we’ve all been there.

OK, this is an awesome pull quote of WTF that I have to share before I get to the main event:

You’re talking about the clips that went around of you singing “Purple Rain.” Yeah. It was around the anniversary of Prince’s passing. Everyone knows how much I admire him as an artist. But honestly, I wasn’t even doing that to sing. It was more like primal-scream therapy.

Nic Cage is my kind of bat s*it, friends.

For instance, his pet cobras were out to get him, but his cat wanted to get high with him. Let he among us who hasn’t been in the exact same situation cast the first stone here:

I did have two king cobras, and they were not happy. They would try to hypnotize me by showing me their backs, and then they’d lunge at me. After I told that story on “Letterman,” the neighborhood wasn’t too pleased that I had cobras, so I had them re-homed in a zoo. The cat — a friend of mine gave me this bag of mushrooms, and my cat would go in my refrigerator and grab it, almost like he knew what it was. He loved it. Then I started going, “I guess I’ll do it.” It was a peaceful and beautiful experience. But I subsequently threw them out.

Later in the interview, he goes on to describe his acting style as “nouveau shamanic” and I never knew I needed that phrase in my life until now.

Seriously, Christmas came early for me this year.

Anyway, Cage goes on to describe his literal quest for the Holy Grail which led him to Rhode Island of all places, and his conclusion on the quest is this:

What I ultimately found is: What is the Grail but Earth itself?

There is no way for me to top that, so I’ll just let Cage have the last word here:

I want to be on the Axl Rose program. I don’t want to go anywhere. I just want to look at my aquarium, look at my sea horse, read my Murakami, watch Bergman.

May we all just have the peace in our life to look at our sea horses in contentment—I simply hope it never turns on Cage and joins forces with his snakes to finally take him down. That would most assuredly be a sad day indeed.