With her parents possibly facing lengthy jail sentences for their part in the college admissions bribery scandal, Olivia Jade Giannulli has decided there’s no better time for her to make her influencer comeback and try to pretend as if she had no idea what was going on with the whole shebang.

In a video posted yesterday titled ‘hi again’, our dear Olivia was trying oh so hard to look somewhat humble and/or upset by the affair but in a way that would not put her in legally tough waters. It’s a tough life, you see. In a rambly, ineloquent two minute video, she said:

‘Obviously, I’ve been gone for a really long time and as much as I wish I could talk about all of this, it’s really hard for me to say this, just because I know that it’s something that needs to be addressed. It’s just, unfortunately, which is also why I didn’t know exactly when I should come back to YouTube, but the reason for that is just because I’m legally not allowed to speak on anything going on right now.’

Uh-huh, okay. You couldn’t have maybe written a few notes down before filming or something?

‘A part of me is like, should I come back to YouTube right now, ‘cause it’s been so long and I actually really, really miss it. Like, I genuinely miss filming. I feel like a huge part of me is just not the same because this is something that I’m really passionate about, it’s something I really like to do. But I also didn’t know, I debated for like, seven or eight months, like, well if I can’t talk about it, is there a point in coming back, and not being able to say anything? I want to come back because I want to come back.

I’m sure pure altruism is what fuels you to return to your favored artistic medium of vlogging, yes. Remember when you bragged about how you didn’t even want to go to USC in the first place because influencing was your dream? How magnanimous of you to still go along with your parents’ scam, right down to posing on a rowing machine to prove your crew credentials and getting someone else to fill in your admissions form.

‘Thank you so much for your patience or if you’ve stuck around for nine months just waiting. I really appreciate it. This is the best I can do and I want to move on with my life…not trying to be in a selfish way…but it’s so hard ‘cause I’m not trying to like, make this about me or like, how I’ve been, because it’s not the point of this. Although I am terrified to make this video and to come back. I know that I also want to start taking smaller steps in the right direction.’

Let’s not and say you did, okay?

Fine, let’s try and take this seriously for a moment.

Take a look at the video and see a somewhat savvy PR game being played here. She’s looking far less glam than she typically does in her videos and on social media, where her family wealth and connections were emphasized frequently. She’s in a simple pink top and working oh so hard to show how down-to-earth and ‘relatable’ she is. That was also a crucial part of her ‘brand’, something she used to do sponcon for Amazon Prime and other such companies that appealed to her age demographic. Before, she was about aspirational relatability, but this here is her attempt to be truly ‘authentic’, stripped of the monied lifestyle that’s not become the elephant in the room of her privilege. Don’t get me wrong, her lavish lifestyle is still on display here. Just look at the size of her bedroom. It’s just not being rubbed in people’s faces.

This is Olivia Jade trying to be apologetic without ever apologizing for the thing she and her parents were accused of. It’s a notable change of pace from her last attempt to return to public life via Instagram. 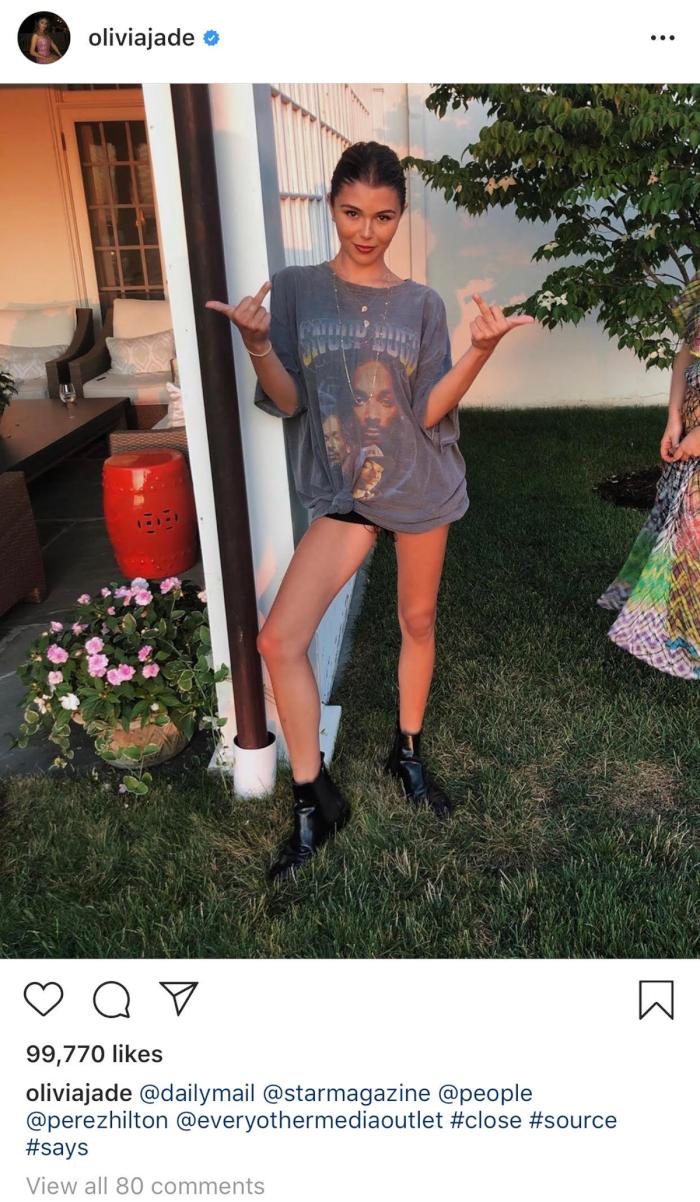 What a bad b*tch with the Snoop Dogg t-shirt she probably bought that day. According to Us Weekly, her lawyers begged her not to post that picture because it would be pure catnip to prosecutors. In perhaps the only savvy move she’s made all year, she deleted the post (but I remembered!)

Olivia Jade will be fine. She’s young, white, conventionally pretty, has no discernable personality of her own, and her family is rich. She’ll be a Real Housewife soon enough, so it barely matters if anyone buys her weak-sauce non-apology. The internet loves to ironically embrace scammers anyway because that’s how bleak the world has gotten. At least aim higher than this, guys.