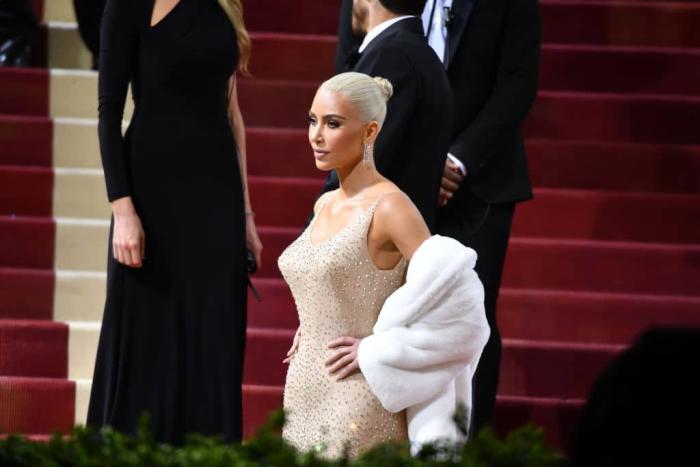 The theme of the 2022 Met Gala was the Gilded Age, so Kim Kardashian came dressed as Marilyn Monroe. To be more specific, Kardashian wore the exact crystal gown that Monroe wore six decades ago when she serenaded President Kennedy for his birthday. The dress is a true piece of fashion history, although you wouldn’t have necessarily known that when Kardashian was wearing it. On top of it having nothing to do with the event’s theme, Kardashian styled it with tightly pulled-back blonde hair and platform shoes to make up for the height difference between herself and Monroe. She also made a big show of telling Vogue that she lost 16 pounds in around three weeks to fit into it, a process that involved wearing a sauna suit twice a day and eating only ‘the cleanest veggies and protein.’

A post shared by Ripley's Believe It or Not! (@ripleysbelieveitornot)

The dress is owned by that most beloved of fashion archivists, Ripley’s Believe It Or Not museum in Orlando, Florida. They paid $4.8 million for it at auction and typically keep the gown stored in a temperature-controlled vault. Since the gown could not be altered to fit Kardashian, it didn’t cover her backside, which she kept concealed with a fur stole. Kardashian explained that she interpreted the Gilded Age theme to mean ‘gilded glamor’ and ‘the most American thing you can think of’, which to her meant Monroe.

Much has been made about the decision of a tourist attraction owning such a piece of fashion history, and the potential risks to the garment of loaning it out for someone to wear, even if it was only for 25 minutes or so, according to Kardashian (she then changed into a replica of the gown for the rest of the evening.) Lili Reinhart took to social media to condemn Kardashian for promoting a dangerous diet to fit into the dress, which she later deleted. Fashion writers had their opinions on the choice, as did fans and detractors of Kardashian alike. When I saw it, I just remember sighing and thinking, ‘Christ, they really won’t let that woman rest, will they?’

It feels like there’s been a lot of Marilyn Monroe in the world recently. Andrew Dominik’s upcoming biopic Blonde has garnered much of its pre-release hype around the fact that it’s going to be rated NC-17 thanks to the sexual and violent content. Some TikTokers went viral for trying to assert that Monroe was asexual based on her diary entries (Monroe’s diary and personal papers were published in 2010 and many are readily available online.) Fresh off the Met Gala news, JC Penney announced a limited edition collection inspired by Monroe’s own style, launched in collaboration with Authentic Brands Group, the owner of the Monroe estate. The group’s brands portfolio also includes the estates of Elvis Presley, Muhammad Ali, and the still-alive David Beckham.

Authentic Brands Group acquired Monroe’s intellectual property after it was sold to them by Anna Strasberg, the third wife of the legendary acting coach Lee Strasberg. When Monroe died, she left everything to her beloved friend and mentor, with whom she worked at the Actors Studio. Monroe’s will stipulated that Lee Strasberg ‘distribute these, in his sole discretion, among my friends, colleagues and those to whom I am devoted.’ That never happened, although Lee Strasberg didn’t sell any of her things in auction. When he died, Anna Strasberg assumed responsibility for the estate, which had been in storage for many years. She soon put most of these items on the auction block via Christie’s , including that gown worn by Kardashian. Soon, Monroe’s personal effects of all kinds — from makeup to letters to clothing — became popular and common sights in auction houses. You could even buy a maternity dress she wore. In 2016, another auction took place from the Strasberg estate that included Monroe’s spoons (sold for $1062.50), a prescription pill bottle ($8,125), and her SAG card ($2,240.)

Marilyn Monroe by Eve Arnold on the set of The Misfits, 1960 pic.twitter.com/lPCsc1g7A9

Nowadays, you’re more likely to find Monroe’s face or name on just about everything, thanks to Authentic Brands Group. You can buy Monroe jewelry and clothes. Her face has been used to sell perfume, hairspray, Coca-Cola, and lottery games. Louis Vuitton ‘hired’ her for campaigns. And yes, there are NFTs too. So many NFTs. All of this is predicated on the hyper-specific but ubiquitous image of Marilyn Monroe as a ‘sex symbol’, the ultimate beauty, the blonde bombshell who is still inspiring copycats in the 2020s.


As is often the case with celebrities who died tragically and before their time, Monroe is horribly easy to project our own ideas and preconceptions onto. Her image is conveniently flattened into one that is easy to sell, consume, and perpetuate. When you slap Monroe’s face onto an advert, the message is simple: she’s glamorous and so are we for using her to sell our crap. She’s not the only late celebrity this has happened to. Look at the branding of James Dean as the perennial rogue or Steve McQueen as the fast-driving bad boy. It’s now weirdly expected for deceased singers to have hologram tours to keep audiences sated. But the particular way that Monroe is sold off for parts long after she stopped being able to make those choices for herself reflects the cruel ways she was misunderstood and exploited during her lifetime.

Monroe fought hard against the stifling type that Hollywood put her into. She was constantly dismissed as a dumb blonde, someone to leer over but not actually listen to. Her talents as an actress were consistently ignored, even by her freaking husbands. An ambitious and skilled woman who loved books, survived sexual assault, and suffered with immense chronic pain due to endometriosis is seldom talked about as such. What she’s packaged as is the hot girl in the white dress. She’s glamour, so said Kim Kardashian. The most American kind of glamour. I’ll leave you to come to your own conclusions about how a woman who made her fortune by commodifying her heavily altered body would think of Monroe in such limiting terms.

Authentic Brands began the auction of its second batch of #NFTs this week, inspired by the icon #MarilynMonroe.


Celebrity is rooted in the notion of selling a dream to the public, to position oneself as special in a way that the majority of us are not. It breeds many toxic ideals, from spite to entitlement, and it takes a lot to temper those forces. Monroe was never able to sate the fans, the studios, the men she loved, or the filmmakers who doubted her. In death, any semblance of control she had over her circumstances disappeared once people realized how much money there was to be made by feeding this impossibly hungry beast. Her films are still watched but the way we primarily see Monroe is as a body, as an exemplification of sex, and that’s sadly not going to stop any time soon. I doubt that Authentic Brands Group plans to license some schlock based on Monroe’s intellectual pursuits.

There’s this famous quote often attributed to Monroe that says, ‘If you can’t handle me at my worst, you don’t deserve me at my best.’ It’s slapped onto many mugs, Instagram quotes, and ‘Live Laugh Love’ style posters. Monroe never actually said it. We have no evidence or attribution to suggest that she ever made such a comment. Of course, we’ve seldom let the truth get in the way of a good sale or viral moment.


← 'This Is Us' Still Had At Least One Kick in the Teeth Left in the Tank | It's Star Wars Day! Celebrate With The 'Obi Wan Kenobi' Trailer! →