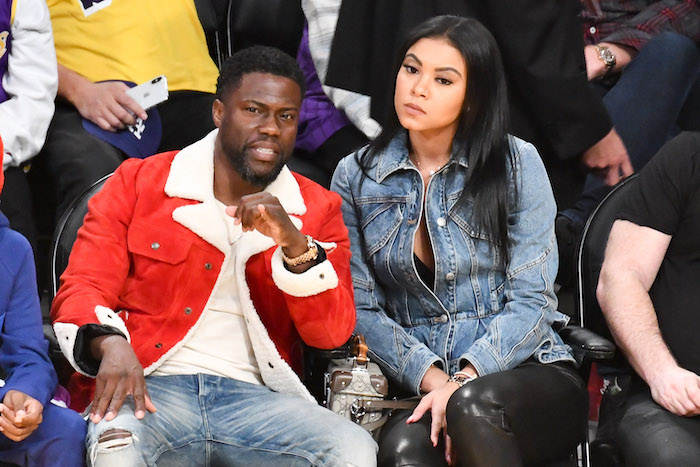 Kevin Hart’s Wife, Eniko Parrish, Found Out He Was Cheating Via DM AKA One of the Worst Ways Possible

Friends, it recently came to light that Kevin Hart’s wife found out he was cheating while she was very much pregnant via DM because someone decided it was a good idea to send her an edited video of the act. (You’ll recall this all surfaced because an ex-friend tried to blackmail Hart in 2017 over the tape.) This method of delivery was revealed in the new Netflix docuseries on Hart, titled Kevin Hart: Don’t F**k This Up. (Spoilers: he did.)

“How I found out was a DM. I don’t know who it was,” Parrish said in the series’ episode 3, titled What Happened in Vegas. “They sent me an edited video of Kevin and, you know, another woman.”

Parrish continued, “I was pregnant at that time, I was about seven or eight months pregnant. I was having breakfast, I opened my phone and immediately I just lost it. I called him, I’m crying, I’m like pissed. Right then and there, I kept saying, ‘How the f— did you let that happen?’”

“You publicly humiliated me. Your whole everything’s on Instagram, everything’s on social media. It was an ongoing fight all the time. Every single day,” she said. “I kept questioning him, like, ‘If this is what you’re gonna do, I don’t want to be a part of that.’”

OK. So…friends. Friends of friends. Enemies of friends. I’m not entirely sure there’s a correct way to tell someone their partner is cheating on them, but I’m 99 percent sure via a DM isn’t it. Now, it’s not the worst method to tell someone that their boyfriend/girlfriend/friend-o is catting around on them. That would obviously be a singing barbershop quartet sent to their work to croon to them about infidelities during an All-Staff meeting. That said, it is obviously not the best method, either. (That would clearly be at Poison concert, backstage, when Bret Michaels has his acoustic guitar on standby to sing “Every Rose Has Its Thorn” while they process the information. It is known that the soundtrack to all emotionally devasting news is that song. Duh.)

So, I’m going to make this a short one because sometimes life’s lessons don’t need to come in long-winded scribes. Let’s just keep this one simple—if you have knowledge that someone is catting around and you feel you must tell the other party in the relationship, don’t DM them. Figure out a better, more empathetic way.

You know what? I’m going to throw in this secondary piece of advice for free, too. You may be an agent of chaos (like yours truly) and your inclination may be to get a free trip to New York out of it, because, you know, every rose does have its thorn. Regardless, you need to fight this instinct and not try to take this person on Maury. No good comes of Maury. I say this as someone who loves Maury, but this is not the way.

That’s advice you can take to the bank, friends. (The bank won’t cash it or anything, but you can take it there, and maybe finagle a free lollipop out of it.)

Anyway, you can watch Eniko Parrish relive a very painful part of her life that her husband put her through, in the docuseries, or you can watch Witcher, also on Netflix. I know what I’ll be doing.

← Review: 'The Witcher' Is Good as Hell and You Should Watch It | Who Were Jason Sudeikis And Adam Pally In 'The Mandalorian' Finale? →