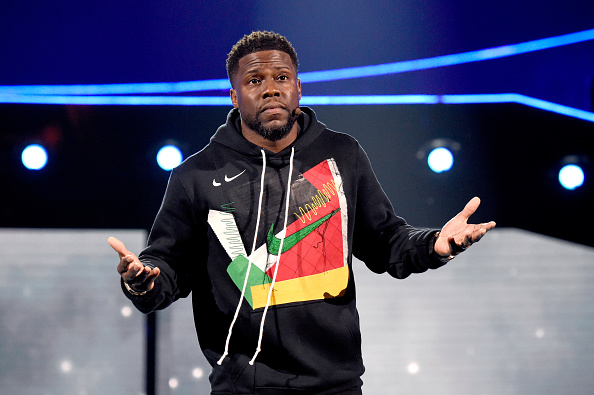 Old comments that Kevin Hart made about potentially beating the gay out of his son surfaced last year, and the backlash led to his decision not to host the Oscars (and seek to rehab his image on Ellen, before it was widely known that Ellen is a disaster of a human, herself). Now, Hart is using his 15-year-old daughter as comedic fodder in his latest Netflix special, Zero F*cks Given, where he called her a “hoe.” After he got called out for it, Hart defended himself on the Clubhouse app, where he claimed that he didn’t call his daughter a “hoe,” but rather that she engaged in “hoe-like activity.”

For the record, in the special, Hart did both: “My daughter a hoe,” he joked. “This is hoe sh*t. Hoe activity right in front of my face.”

He took to Instagram, however, to say that those criticizing him were “creating a false narrative,” and that this was “not about Black women.”

Twitter seemed to believe that it definitely was about Black women.

So you mean to tell me kevin hart was on clubhouse calling all the black women in the chat hoes, doubling down on slut shaming his 15 year old daughter, talking over and gaslighting black women, defending r kelly and bill cosby, letting other men threaten black women, etc? pic.twitter.com/mW7uejtMjf

The non-apology follows a fairly familiar pattern with Hart, where he sticks his foot in his mouth, he gets called out for it, and then he claims he is the victim. I’ve never seen a comedian have to defend himself as much as Kevin Hart does. It’s basically his default position now.

I bring this up as a part of a pattern because Hart was on the Conan Needs a Friend podcast earlier this week. I think I’ve listened to almost every episode of Conan’s podcast, mostly because he has great guest but the show is not completely reliant upon them. Conan can have very insightful conversations, but mostly it’s an excuse for late-night host to riff with other people. This can be delightful or annoying, depending on your tolerance for Conan (I love him, and mine is very high), but in either respect, you can expect three things from nearly every Conan Needs a Friend podcast: Conan will invariably turn even the most poignant moments into bits, at least 10-15 percent of every podcast is made up of laughter, and for better or worse, Conan will probably dominate the conversation.

That is, except for the Kevin Hart episode. What a pile of sh*t. Most guests come on to promote something that they never actually get around to talking about because they’re having such a good time. The Kevin Hart episode, on the other hand, was almost entirely about Kevin Hart promoting himself and his tireless work ethic. You know how I know it’s tireless? Because he spent the entire time telling us as much. When he wasn’t talking about his work ethic, he was telling us what a victim he is. He did mention systemic racism, but he mostly suggests that it is being used as a cudgel to take him down, specifically, which is kind of the opposite of “systemic.” However, if you believe Kevin Hart — who is in a bubble with his own trainer — everyone is out to get him, and the only defense he has to the consequences of his own actions is to … turn himself into a brand.

“How I do become a brand, a business, an entity, an IP? … so that at the end of the day, I’ve built a brick house … How? I’m going to outwork everyone … My rules of success will not be the star that I will be, it will be the stars that I create.”

And no one, by the way, has spent more time apologizing for something for which he clearly doesn’t think he needs to apologize.

“I did everything in my power to show how remorseful I am,” Hart says, referring to the homophobic incidents that have cast a cloud over his career in the last year. “That took an amazing display of energy and effort to prove once again who I am. I have to go above and beyond to prove that because it’s been compromised … the pressure of perfection is on me [because I am Black]. That’s the mindset. That’s the attitude.”

And again, Hart continued to rail (on a comedy podcast!) that the only way to insulate himself against cancel culture is to turn himself into Oprah (often while speaking in the third person):

“I am in this position of power. I’m a CEO. I’m the chairman of my company. I’m a real fucking entity. I’m a real mogul. But anytime anything happens to me personally, I have to worry about the people beneath me. Hundreds of people. And now Kevin has to walk at the highest level of success in fear of his moves. I can’t mess up … so I’m just always trying to make sure that I’m doing the right thing.”

“If I do come up short, which I doubt I will, because I do not lose. I do not fucking lose. But if I do come up short, I will come up so short that all the next person who comes along has to do is take a right instead of a left … my business is in the business of implementing and planting a flag of opportunity. If I do that, then I did my job. So whether you like me or not, you’re going to have to respect it … if I can put myself in the conversation [with Tyler Perry, Oprah, Jay-Z], then God bless me.”

What’s even more remarkable is that by the end of the episode — after about 20 minutes of uninterrupted monologuing (something that’s never happened on Conan Needs a Friend) — Conan spent the last several minutes basically trying to assuage Hart’s own insecurities and remind him of how successful he has been. It was surreal.

Kevin Hart is doing a great job of promoting his special!

y’all. y’all. there’s so much to say about this kevin hart convo. he’s compared himself to oprah and obama. and said black people bury their own. his chosen example is bill cosby. happy friday.

← Transition Updates: Trump's Running in 2024, and Biden's Getting a Cat | Review: In "Small Axe: Lovers Rock" Steve McQueen Throws the Party We All Need Right Now →