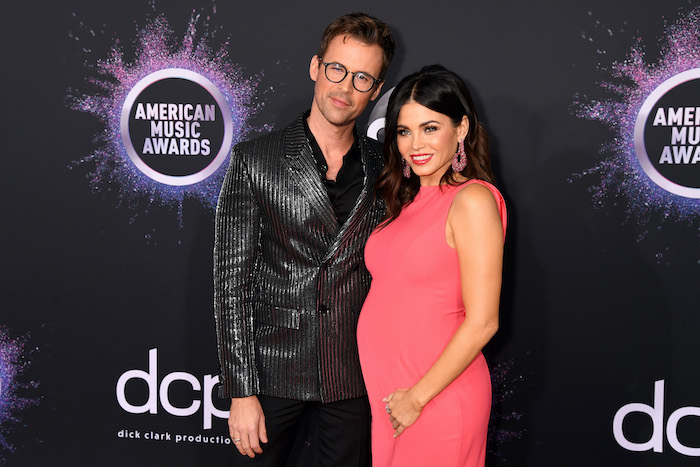 One of the benefits (and drawbacks) of being in your thirties is that celebrities will pop up out of nowhere and will be talked about as if they’ve always been there, and honestly, it will confuse you for a bit until you take the time to figure out who they are. I bring this up because I just figured out who Camila Cabello is—she was part of Fifth Harmony! Which is funny because I think about their weird Jimmy Kimmel Live performance, where they sang next to heavy machinery in toolbelts, more than I should:

Seriously, you should watch the video above because it will put what we’re about to discuss in total context. Or maybe not, but it’s weird and funny in a good way.

Last night at the American Music Awards, Jenna Dewan turned to Brad Goreski (who is also one of those people who you’re supposed to know, but I don’t, so I’ll save you the Googlin’—he was Rachel Zoe’s employee on her reality show 10 years ago, and he spun that off into fame of his own. I made sure to include him in the header picture so you have a visual) and said, “she’s always extra” while rolling her eyes. Our pals at Celebitchy captured the moment for you:

If you’re wondering if the performance really was extra (it was) here it is. The eye-roll moment happens at 1:44 if you want to put on your investigating glasses. You’ll also have a conniption fit at 2:41 when you realize they sat Billy Porter next to Taylor Swift. Why did they do Billy dirty like that!?:

Naturally, realizing she was caught, Dewan went into full damage control to try to keep the scandal at a minimum, denying she meant “extra” in a derogatory way (I guess that was a friendly eye roll, too?) Man, I miss the days of Bette Davis and Joan Crawford going at each other. If Bette had been caught on camera like Jenna, when asked for comment, I all but guarantee you Bette would have doubled down and ended her statement with “I hope she rots in hell” to which Joan would have replied with “she’s a whore and I’ll save her a spot next to Satan; he’ll want to see his best messenger again.” Bette and Joan were the best.

The days of really good feuds for celebrities are basically gone, and all we’re left with is damage control because messy drama is bad for images, I guess. Booooo. Here’s Jenna Dewan’s mea culpa via People.com:

On her way home from the ceremony, Dewan addressed the drama on Instagram Stories. “I’m getting a lot of text messages from people wondering if I was shading Camila. No! I love her, I love her so much. I’m such a big fan of hers,” Dewan, 38, explained in the video. “I don’t understand what that’s about but no, I love her, love her, love her.”

Ugh. So whatever she was doing (and she was doing something…), it wasn’t shade. I miss Judge Kara Brown and her Shade Court because she fought the good fight by instilling the knowledge that shade is never, ever overt. Shade is something you have to think about to determine whether it was an insult. If someone comes at you head on it’s a read, although a case could be made that Jenna didn’t come at Camila head-on, and was caught saying something by the camera she wasn’t expecting. I don’t buy that. All celebs know that if you’re at an awards show, whatever you do could be caught on camera.

Here are the masters explaining shade (and reads) from Paris is Burning:

So, by that definition (which is the definition) whatever Jenna did/said, it was a (bad) read at best. It’s not shade. Stop calling this s*it shade, people! If you’re going to appropriate phrases, at least get the context right.

Like I said, I miss the days of good feuds. This one is kind of a nothing burger, but since Bette and Joan have been dead for decades, it’s what we have to work with. Hopefully, Cabello responds with, “I do not accept Jenna Dewan’s non-apology. She has made an enemy for life, and I’ll see her in hell.”

I mean, it’s unlikely, but one can hope, yes?

← Why Did The Rock, and Danny DeVito Crash a Wedding? (Hint: Tequila) | A Breathless Update on Justin Timberlake and Jessica Biel's Marriage →