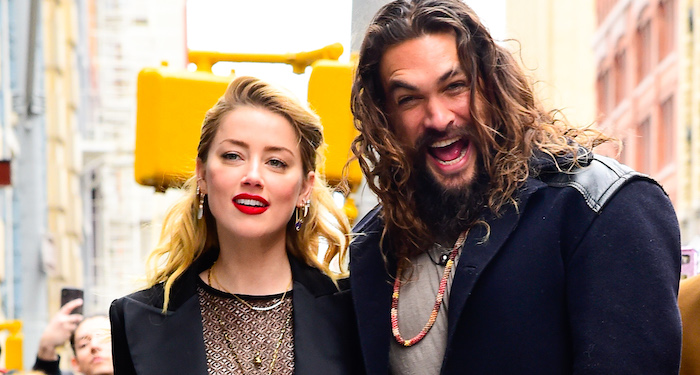 Most of Hollywood has had sense enough to keep quiet about the Depp vs. Heard trial, but a few celebs have publicly taken sides (Eva Green, 👀 ). Jason Momoa is not one of those celebs who has taken sides, despite what Depp stans might have you believe. A few weeks ago, someone noticed that Momoa was following Depp on Instagram and Depp-world went into overdrive suggesting that this spoke volumes about what he must have thought of Heard.

It did not. In fact, Momoa has not spoken publicly about the trial, and no one knows when Momoa started following Depp — it could have been years ago. It’s just that a few weeks ago is when someone actually noticed Momoa was following Depp. He also follows Heard, and despite what Depp stans might have you believe, he didn’t stop following her. We also have to stop extrapolating so much out of Insta follows, particularly when certain fans suggest that a certain actress must have been difficult to work with because a certain exceedingly amiable actor follows her very famous ex on a social media platform. Did you know that Momoa also follows Bowen Yang and Chloe Fineman on Instagram, but he does not follow Kyle Mooney? WHAT’S THAT ABOUT?

The point is: Despite what many have implied about Momoa’s relationship with Heard, entertainment-industry expert Kathryn Arnold testified in the Depp v. Heard trial yesterday that it was Aquaman director James Wan and its star, Jason Momoa, who were the only reasons Heard was not booted from the Aquaman sequel after Johnny Depp tried to get her fired. Heard’s role was pared down, but Wan and Momoa were “committed to her” remaining on the film, according to Arnold’s testimony.

Arnold also testified that Heard’s career was on a trajectory similar to Momoa, Gal Gadot, and Chris Pine before Depp and the “negative social media campaign” of his followers tanked it. Depp’s lawyers, however, countered that the other actors had higher profile careers than Heard before Depp campaigned against her. Outside of the second Aquaman film, Heard’s only notable film role since Depp allegedly tried to have her career trashed is an upcoming independent film.