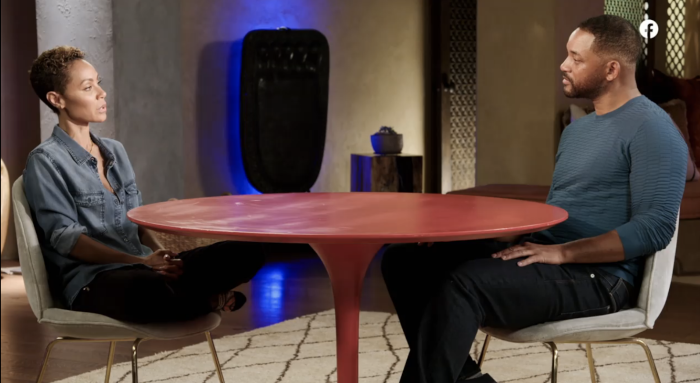 Today on Jada Pinkett Smith’s Red Table Talk, she and her husband talk openly and candidly about allegations that Jada Pinkett Smith had a romantic relationship with August Alsina. I will say this much: I have never seen a couple as famous as Will and Jada talk this candidly and openly about their marital problems. Will Smith looks like he spent three hours crying before agreeing to this 12-minute segment, but here it is.

The take home? It sounds like “they were on a break.” They were separated, and at the time, so estranged from one another emotionally that they didn’t think they’d ever reconcile. During that time (this was a couple of years ago), she had an affair with Alsina. It sounds like Will Smith wasn’t happy about it, or at least not particularly happy about having to address it publicly. However, while the two may or may not have an “open marriage,” the two are certainly open about their marriage with each other. My impression from this conversation is that Will Smith promised to be ride or die with Jada, and Will Smith meant it, and that there was some comfort knowing that — at the end of the day, no matter their problems, no matter with whom they slept — they could rely on having each other and being there, together, for their kids.

The two have apparently gotten to a place where there is “unconditional love,” though there was a period when Will didn’t think they’d ever speak again. “We came together young,” Will Smith says. “We were both broken in our own ways. And to be able to make mistakes without the fear of losing your family is so critical.”

It’s certainly unconventional, but at least in their relationship between each other (and I’ll put the power dynamics between Jada and August aside for the purposes of this conversation), it works. “We ride together, we die together, bad marriage for life.”

I AM GOING TO SPEND DAYS TALKING ABOUT JADA AND WILL'S RED TABLE TALK pic.twitter.com/hI2R4tv7YO

I think that “I’m going to get you back” exchange was definitely about a lot of spite f*cks. What a weird year it has been. The full 12-minute segment can be watched here.


← Review: 'Warrior Nun' Commits the Cardinal Sin of Being F**king Boring | Review: In Netflix's 'Dark,' The Only Answer Is Oblivion →