Friends, sometimes all it takes to get over an imaginary feud is for a baby to come into the picture. Other times, it requires a dark and stormy night, a crime committed together, and a vow to never speak of said night again.

Since we can be reasonably sure of both Kate Middleton and Meghan Markle’s whereabouts for the past year or so, we’ll have to look towards the former as a reason why their “feud” is now being proclaimed as resolved, in CNN of all places. (A lesser person would make a joke about how they’re really leaning into that whole “fake news” moniker they’ve been stuck with. But that’s a cheap laugh, and I don’t do that. Now, excuse me while I go slip on this banana peel while carrying a tray laden with whip cream topped pies.)

Before Archie was born in May, a royal source told CNN the two women didn’t hang out together but texted one another and were friendly — “linked as they are by a common bond.”

That bond appears to have developed since the Duke and Duchess of Sussex became parents. The royal moms have found more “in common,” another royal source tells CNN now, adding that their relationship “has strengthened.”

You know what else strengthens a relationship between two sisters-in-law? Matching tiger tattoos on their butts, but I suppose that will never happen.

Anyway, the press is never one to shy away from a sexist trope, so of course motherhood is what’s bringing these ladies together. Let’s explore that for a moment.

So, as I’m sure none of you will be surprised to find this out, but I firmly believe that some of us are reincarnated. In fact, I spent a lot of time reading this thread on Reddit over the past weekend because a lot of responses were about reincarnation and this is the stuff I like to read in my spare time, to the surprise of no one.

I don’t have kids, but if I did, I would absolutely ask them about what it was like “before.” My mom asked her oldest child (my brother) this when he was able to carry on a conversation, at about age 5. Guess what? He said he remembered and described what happened. He told her that he was allowed to pick out his parents, and after that he was sent to travel down a dark tunnel, rushing towards a light. He didn’t remember what came next. Friends, she did not not ask her ensuing children that question, so she never had the chance to find out if I am actually the reincarnated soul of a majestic narwhal whale, like I have long suspected. Now I can’t remember what it was like “before” so we’ll never know for sure, will we?

Back to the Reddit thread there are a lot of good anecdotes in there about kids’ ability to see ghosts. 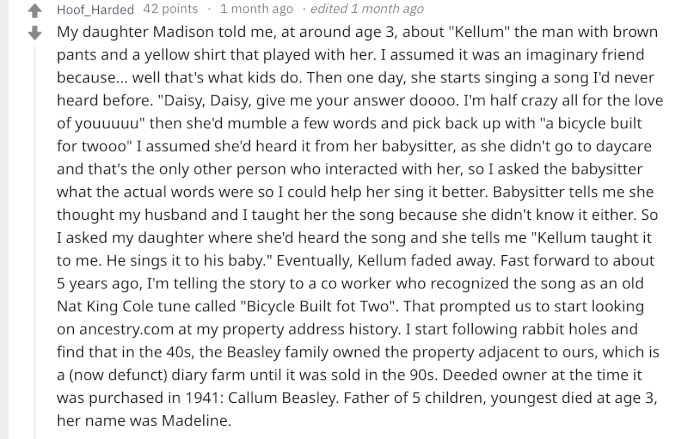 Why am I taking you down this seemingly unconnected pathway into conversations with children about what came before, and their ability to see ghosts!?

Well, friends, now that both Meghan and Kate have kids. I’m sure what’s brought them together is that they are developing a game plan on how to deal with anything their children might say that has a supernatural twinge to it, before it surfaces it.

Kate and Meghan strike me as women who like to be prepared, so why not put their heads together to develop a plan for if (when?) their kids start talking about the ghosts in their historic homes, or what it was like before they came here.

Anyway, I’m sure this isn’t the last we’ve heard of their supposed feud, but it may be the last you hear of supernatural preparedness because I imagine these women work quick and they already have their game plan in place.