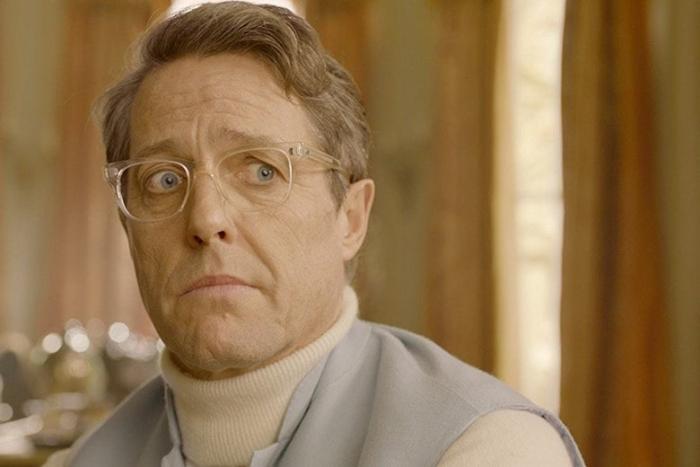 Historically, Hugh Grant has not been particularly well-liked among his peers. Julia Roberts, Robert Downey, Jr., Drew Barrymore, and Julianne Moore all reportedly hated working with him, and Grant not only knows it, he’s weirdly charming about it*. Jon Stewart also once called him the worst guest he ever had on The Daily Show, a slight for which Hugh Grant — again — conceded and charmingly apologized.

Turns out my inner crab got the better of me with TV producer in 09.
Unforgivable. J Stewart correct to give me kicking.

(*Fun fact about that linked clip above: In it, Hugh Grant expressed annoyance with Drew Barrymore because she gave him notes on a movie they worked together. Meryl Streep takes Barrymore’s side, but Meryl Streep also reportedly did not like getting notes on the set of Big Little Lies. Then again, she’s Meryl Streep, and he’s Hugh Grant).

In any respect, Hugh Grant doesn’t work that much anymore, whether by choice or by necessity (I think it’s probably a bit of both), but the man who has made a half a dozen well regarded romantic comedies (and a half a dozen less well regarded romantic comedies) is properly self-aware enough to know what his best movie is: Paddington 2. From Vanity Fair:

“I was presenting I think at the Golden Globes, and they do that thing when you walk out, and they say, ‘From the forthcoming Paddington 2, Hugh Grant.’ And someone showed me Twitter afterwards, and it was … people were full of derision. ‘Christ, has it come to that. Poor old Hugh. Paddington 2. Sequel to a kids film,’” Grant recalled. “It’s particularly annoying in the case of Paddington 2, because I genuinely believe it may be the best film I’ve ever been in.”

He is not wrong about that (although, About a Boy is the rare movie that’s better than the book, and I loved the book). In any respect, Grant will next appear in the HBO series The Undoing with Nicole Kidman, who may or may not “loathe” Grant now that she’s worked with him extensively.


← A Note from the Publisher | Idris Elba Says Heimdall Is Still Alive, Could Be in 'Thor: Love and Thunder' →