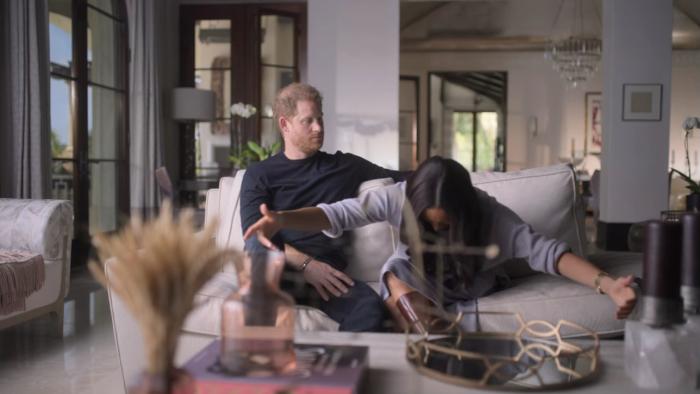 'Harry and Meghan' and the Manufactured Outrage Over the Meghan Curtsy

Many, many years ago, I was watching news coverage of the London premiere of The Lovely Bones. Since it was the first project by Peter Jackson in a long while, then-Prince Charles attended the premiere, doing the usual round of greetings and small talk with the stars, including one Saoirse Ronan who, in keeping with protocol, had to do a curtsey. In retrospect, it looks like such a nothingburger of a deal: Of course, a then-teenaged Ronan would’ve been instructed to follow the royalty protocols, her only responsibility back then was to herself and to get through the nerves of her breakout moment. Moreover, the late 2000s and early 2010s were a gilded time for the British Monarchy in terms of public image; no one back then was second-guessing themselves about the optics of that moment: An Irish-Republican teenager born in the USA (and already poised to become one of the leading actresses of her generation) bending the knee to a British Royal.

To be fair to everyone involved, if I ever had to meet a Royal, and considering how much of a pushover I am, I’d lower my head just to avoid getting an earful. My neck would vein up like Stallone’s though, as the societal pressure pivoting it down clashes against my Republican ideals trying to keep my head in place. It would be an awkward moment, but it’s not my fault. The stupidity of Royal protocol, already an absurd imposition on their “subjects” in this bloody century, becomes even more exposed when Republican citizens are forced to follow it.

As expected, a certain subsection of British people lost. their. goddamned. minds. with the first part of Netflix’s Harry & Meghan. Also as expected, they came prepared with a host of talking points to attack that Jezebel who stole the Prince they really didn’t care much about. Actually, they were prepared so far in advance to counter the documentary that they didn’t even bother to see it. The first part criticized the Press’ parasitic relationship with the Firm, and since the British Press has a lower tolerance for feedback than Kanye, their central thesis came naturally: The Sussexes have dug their own grave and exposed themselves as spoiled, clout-chasers in their own documentary. Also, Meghan Markle is a succubus that has pussywhipped Harry into a beta cuck. Also, Harry is a traitor. But also, he has been brainwashed by that woman. But he’s also going to divorce her soon and return to the warm clarity of his actual family.

A coordinated press attack against a public figure is supported by a big narrative (“MEGHAN MARKLE IS DESTROYING BRITAIN BY BRINGING A RIFT INTO THIS ONE PARTICULAR FAMILY OF GERMANS”), but you also need to bombard your target audience with the smaller “offenses” the public figure has committed. Unlike the big narrative, they are usually more tangible things, and there are more of them for you to work into the propaganda. That’s because you can twist absolutely everything a public figure does or doesn’t do into one of these misdemeanors. Ultimately, they accumulate into something that can distract your target audience from the flimsiness of your main narrative. This is what FOX News did with Obama throughout his tenure, as compiled by The Daily Show.

The British Press has found Meghan Markle’s tan suit. In the second episode of Part 1, she describes the first time she met Granny Lizzy like so many Americans do when they have met Royals: Laughing at themselves for their lack of handle on the protocols and the clumsy ways they try to keep up with it, while gently poking fun at the weirdness of it all. It happened to Meghan; she overdid the presentation curtsey in a mangle of nerves, made relatable by her as typical awkwardness when meeting the In-Laws. Just a fun moment of self-deprecation and comedy of manners. Nothing beyond that.

Not according to the British right-wing press, who deemed this story the WORST THING THIS WOMAN HAS EVER DONE, disrespecting BRITISH CULTURE. Let’s not forget that the British right-wing press is a circle you can’t enter without passing a very specific test, namely, that you can prove your excellence at being bitter, racist, and insular. And there’s no bigger hive of bitter, racist, and insular people than British right-wingers. I mean, at the very least, when Americans are bitter, racist and insular, it’s because they live in American suburbs and the oldest thing in a 100-mile radius is a McDonald’s that still has the ’90s interior design. British people live surrounded by lovely Medieval churches, green belts, and trains, and somehow there’s a subsection of them that thrive on being bitter, racist and insular, even though they are safely middle-class. 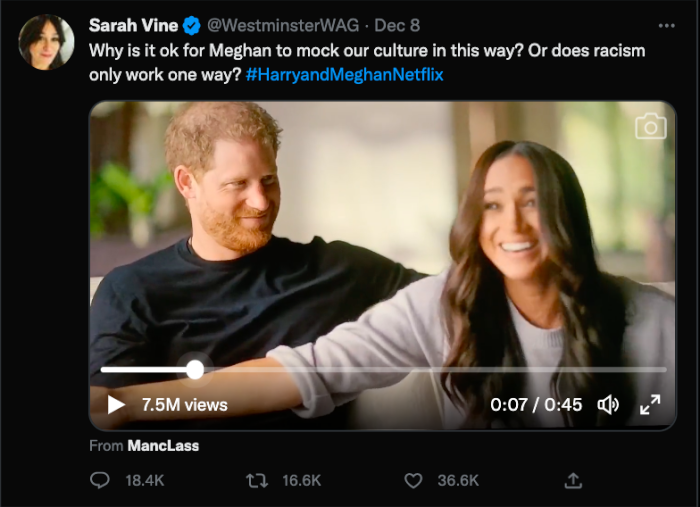 As a reminder, Sarah Vile VINE! is the same woman that ruined the word “niggling” by writing a column that described her suspicions about this Meghan lady, using that word in a very targeted way. Of course, Vile got herself ratioed and quote-tweeted to death, some with a way more ingenious way with the English language than Vile could ever achieve: 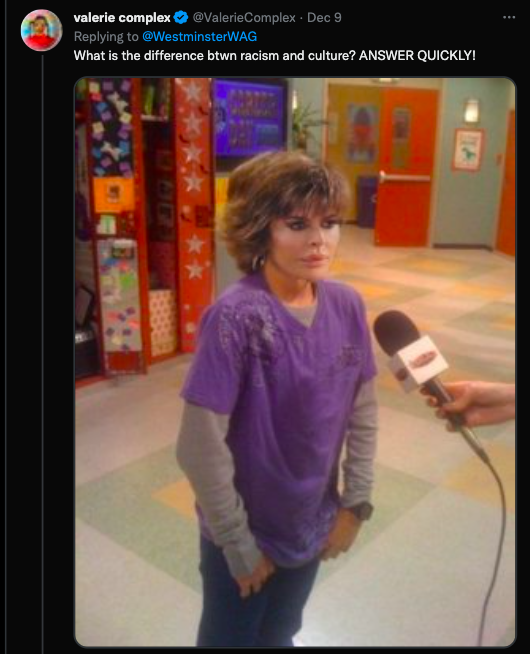 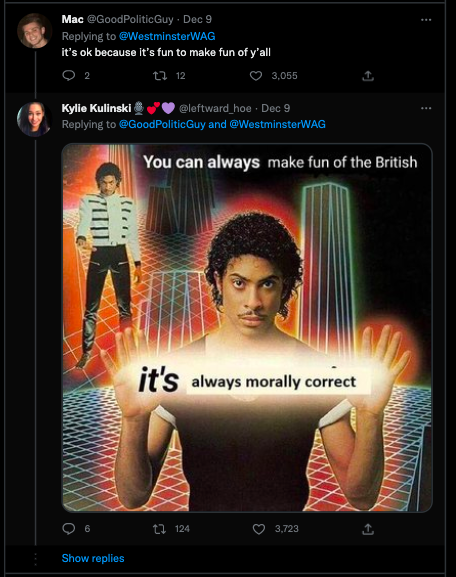 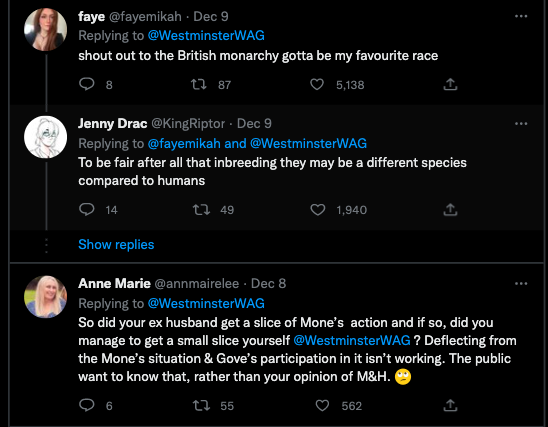 Sarah VileVINE has made a career out of being a toxic POS; that’s why she could only aspire to writing in the Daily Mail. She opened the floodgates for other Royal Rotas, with different levels of respectability, to push ahead the narrative of the ignorant and disrespectful Meghan, each trying very hard to name-call her without using the B, C, or hard-R words. Also, throw in the bad-faith idiots who seem unable to understand that the head-bows in many Asian cultures are supposed to be mutual. And the idiots trying to do body-language readings of Harry’s reaction (remember, kids, that Body Language Reading is bullshit science!). My timeline was filled with these whining dicks, probably because Musk ordered the algorithm to prop-up right-wingers, but mostly because everybody is giving them crap in their comments: 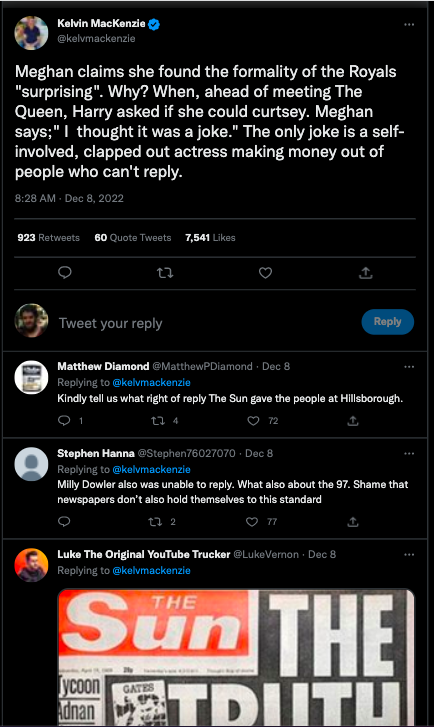 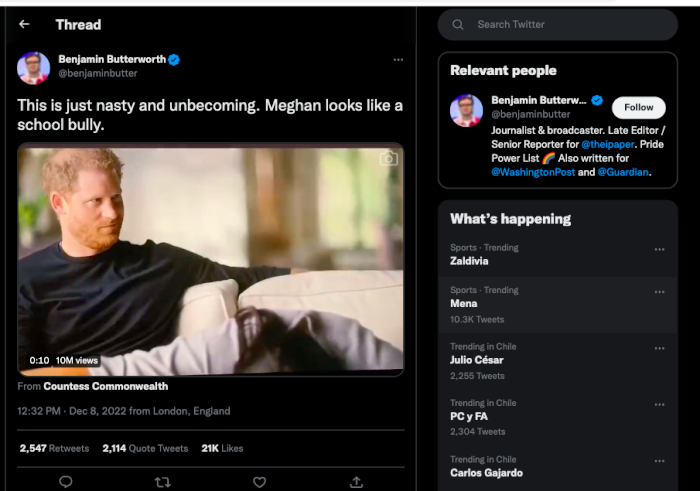 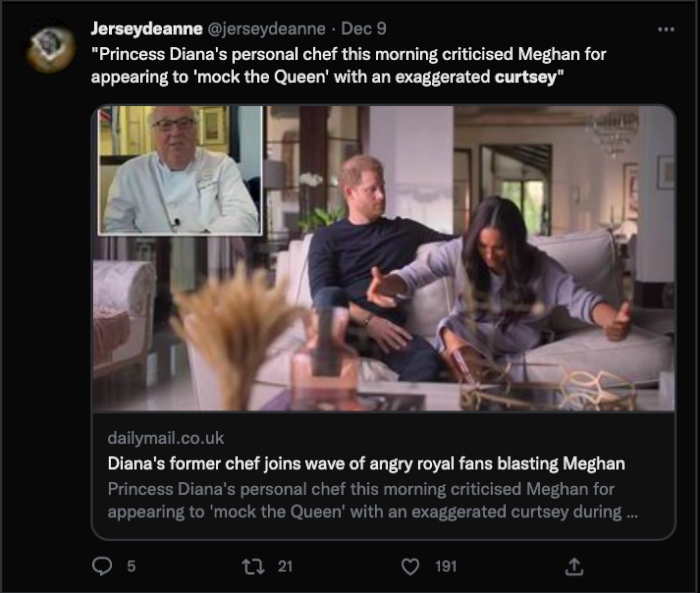 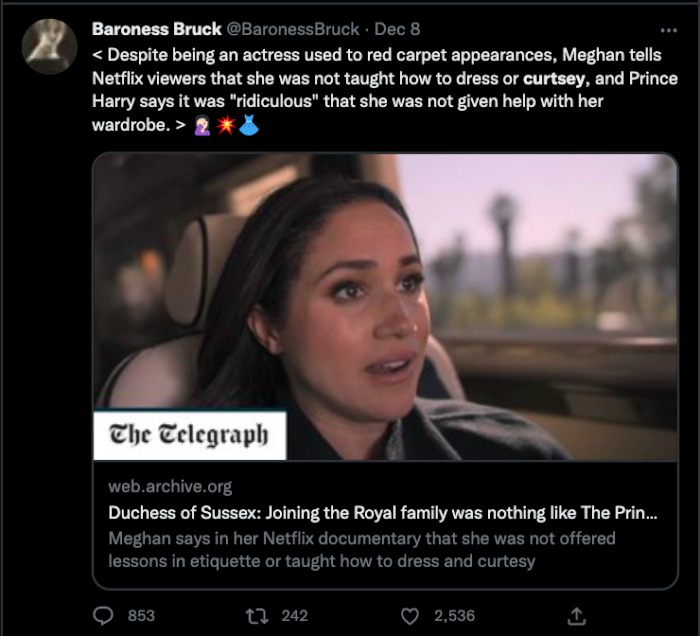 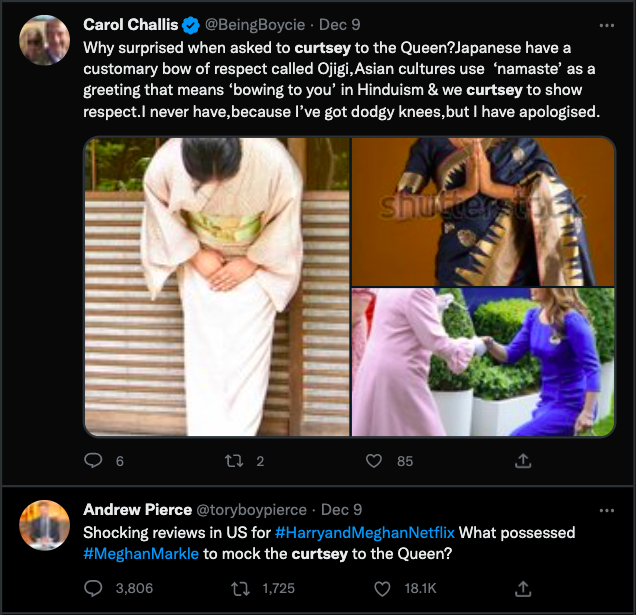 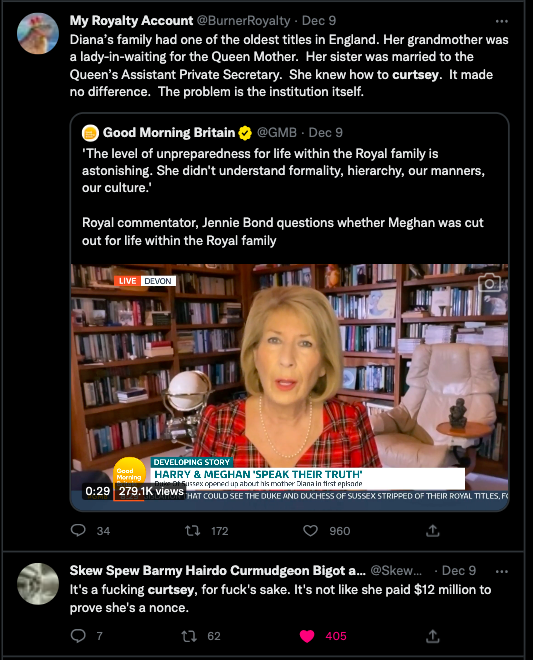 Criticizing this manufactured controversy, I found two tweets that actually get to the core of what the British right-wing press is doing here… other than being bitter, racist, and insular, something from which they derive pleasure and pain: 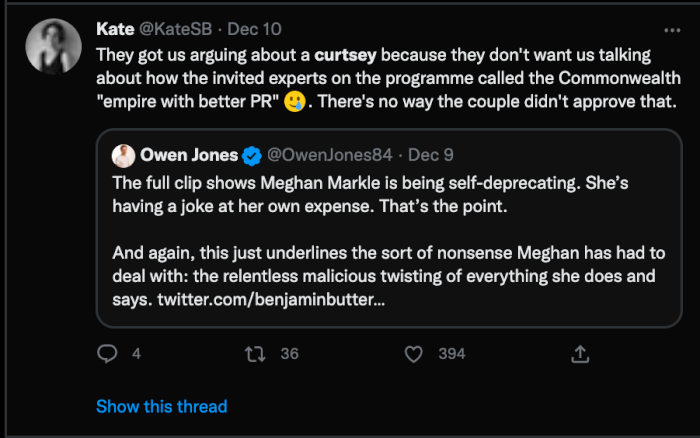 And that’s the thing: The British right-wing press (I say this instead of “tabloids”, because The Telegraph and The Times are just as guilty of this) has mastered the art of deflecting any accountability, to the point they were willing to pin Diana’s death on the Queen, the very goose that laid their golden eggs, so that the public’s wrath wouldn’t turn to them. They succeeded. They survived the Levenson Inquiry. They have become specialists in pushing the right buttons of their core audience, also made up of bitter, racist and insular people. They have to immerse them into a chorus that will repeat the same thing until it becomes a self-serving truth, that curtseys and etiquette toward the royals are what truly make British culture. The kind of idea that could not survive a simple chain of critical “Whys?”: Why curtsey to Charles III? Why, because he was born of Elizabeth II? And why did people curtsey to her? Because her dad was King George VI? And why did people curtsey to him? Because his brother wanted to pork an American fascist. And so on until you reach the start of the Georgian era, and you notice these people have done nothing of consequence for more than 250 years. And then you go further and further back and you realize that you’re curtseying to these people because one guy named William 900 years ago was a good warrior, and Charlemagne’s ancestors before him were also good warriors. Also, they believe Catholicism is a stain on your blood or something. In the meanwhile, and before that, there were 2500 years of pretty interesting history, characters, and cultural objects. That’s good enough to make up a culture.

But instead, these monarchists somehow want us to believe that curtseys, head-bows, and this dour family of Germans are the actual tenets of British culture. Tenets that are somehow extremely fragile and could easily be broken by this hussy from the Colonies. In proper British: Bit weird, innit? Bit weird that Meghan could threaten the fabric of British culture by, supposedly, bringing a rift into a family built around dysfunction. But more than weird, it’s sad. It’s sad that so many millions of people, in what is ostensibly a modern, democratic, and developed society can still hold on to the idea that they have to show physical deference to a bunch of people who have achieved nothing. That they are so broken by monarchist culture that they need to believe that this dysfunctional family is endowed with something that puts them a station above, an inherent divine glamour when in reality they just keep a good posture. And in that national process of self-submission, ironically, they miss out on the cultural staples they actually should hold on to, like the NHS, or the arts education that made The Beatles, Bowie, or Maggie Smith. Or lighting a flare in your ass after losing a football bet.

But that would imply doing away with the cozy displeasure that is bitterness, racism, and insularity.

Alberto Cox actually doesn’t care that much about the Sussexes, but will fight to the death so they can have the right to give British right-wingers a gout fit


← Why No Award Season Love for 'Reservation Dogs'? | 'Emancipation' Review: I Want Reparations For Slogging Through This →